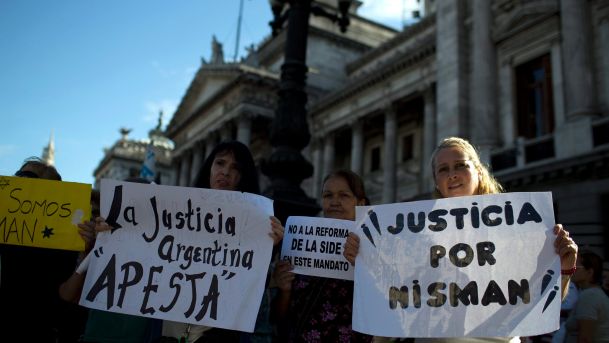 In 1994, a Buenos Aires Jewish community center was bombed by terrorists. Speculation focused on the Iranian regime and its terrorist proxy Hezbollah, as well as the long reach of the Revolutionary Guard Corps and its specialized Quds Forces.

Argentine prosecutor Alberto Nisman had doggedly pursued the investigation into the bombing, leading up to his indicting eight former Iranian regime officials and one Lebanese national in 2006. The following year, at Nisman’s behest, Interpol issued “red notices” for the arrest of six of the accused. But the Iranian regime predictably took no action.

The Wall Street Journal reported on Nisman’s efforts this week culminating to his death under suspicious circumstances when he died from a single gunshot to the head in January 2015, a day before he was scheduled to testify to Argentina’s Congress about an alleged government cover-up of the bombing.

Using legal wiretaps, Nisman later built a case that then-President Cristina Kirchner’s government had a covert agreement with Iran to wipe Tehran’s fingerprints off the AMIA attack, as the center was known, in exchange for Iranian oil and reopening Iran’s market to Argentine grain and beef.

Nisman had filed a criminal complaint against members of the Kirchner government the week before he died. Killing him did nothing to stop the public from learning of the contents of his report. Yet his death did put the brakes on his plan to bring the Iranian regime’s crime into the international arena. It had the potential to undermine the key foreign-policy objectives of Tehran, especially plans by the mullahs to engage the West in a nuclear agreement to lift economic sanctions.

The lifting of sanctions and the re-engagement of commercial activity is a crucial element to Tehran’s long-term plans since it allows the regime to deploy political and military operatives specializing in propaganda, intelligence, terrorism and insurgency to finance their illicit activities under the guise of normal everyday business.

Months after Nisman’s death, a safe-deposit box was discovered with a signed document by him formally requesting the United Nations to intervene in the investigation.

Joseph Humire, the executive director of the Washington, D.C., based Center for a Secure Free Society, uses thousands of documents and legal wiretaps released to the public to show how the prosecutor’s death eliminated a key stumbling block for Iran and “paved the way for [it] to move into a new phase of its information and intelligence operations in Latin America.” If the theocracy, which is the No. 1 state-sponsor of terrorism in the world, did not murder Nisman, it was the biggest beneficiary of his death.

The timing of Nisman’s death was thus critical as the Iranian regime entered intense negotiations by 2015 for a nuclear deal. An investigation in Argentina showing the regime’s culpability in terrorist acts abroad would severely damage the arguments being made by the regime and the Iran lobby that the incoming administration of Hassan Rouhani was only focused on peaceful and moderate accommodation with the rest of the world.

Authoritarian governments in Venezuela, Bolivia and Nicaragua have welcomed the presence and influence of Iran, but Latin American countries have been surreptitiously invaded, beginning with embassies, cultural centers and mosques. Peru’s southern rural communities are typical targets for launching networks. Front companies in the beef and oil industries in Brazil and Uruguay are used to provide cover for Iranian regime’s operatives, according to Humire, who also cited the rise of Iranian mullahs’ infiltration of universities.

Surely the mullahs in Tehran see the opportunity and have aggressively moved to expand their influence in a region with a U.S. administration pursuing a policy of appeasing the regime.

The linchpin of  those efforts remain the nuclear deal reached last year which is giving the Iranian regime the legal fig leaf to seek out commercial agreements providing it the opportunity to expand its influence throughout the world.

The situation in Argentina of suppressing a terrorist attack in exchange for business deals was a dark foreshadowing of what is happening today with recent announcements by companies such as Boeing in new agreements with the regime.

The nuclear agreement has been under severe criticism though with revelations and disclosures coming almost daily undercutting the arguments made by the Iran lobby and other regime supporters in favor of it. These include:

But the Iran lobby continues to fight for the survival of the nuclear deal and by extension the survival of the regime’s leadership as evidenced by an editorial penned by Seyed Hossein Mousavian, former head of the Foreign Relations Committee of Iran’s National Security Council, and Reza Nasri, a scholar at the Graduate Institute of International and Development Studies in Geneva in the New York Times.

They predictably blamed the U.S. for not living up to its end of the nuclear agreement bargain by keeping in place sanctions not related to the nuclear program, but instead human rights violations and sponsorship of terrorism, thereby threatening to undermine Iranian confidence in the deal.

In essence, they are saying the U.S. should be at fault if the mullahs walk away from the deal because it restricts their ability to fund terror.

It is an inane argument and one quickly losing its appeal as the spread of Islamic extremism from Iran now reaches into the Americas.