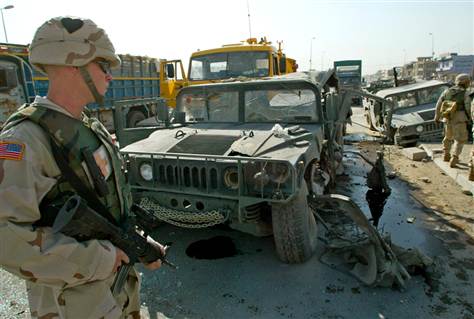 Iran Regime Provokes Confrontation with US

Trita Parsi of the National Iranian American Council has been a consistent and vocal supporter of the Iranian regime and its claims to want a pathway to peace. The lunacy of his comments has been laid bare repeatedly over the last two years since the Iran nuclear deal was signed and Iran plunged deeper into wars in Syria and Yemen.

Over the past two years the mullahs in Tehran have focused their efforts at saving the Assad regime in Syria and putting enormous pressure on Saudi Arabia through the Houthi rebellion in Yemen and attempting to destabilize the Gulf states with the smuggling of weapons and explosives.

They have also sought to expand Iran’s power through a rapid development of its ballistic missile program to increase the range and payload capacity to send an unmistakable threat to Europe, Asia and throughout the Middle East.

So far, the Iranian regime has been careful to focus its efforts and its most militant actions against traditional rivals such as Saudi Arabia or to keep allies in place such as Assad or continue cracking down on internal political dissent, but a new trend has emerged lately as Iran directs its provocations directly at the U.S.

Over the past few months, Iran has steadily been ratcheting up the pace and frequency of actions aimed directly at the U.S. and its forces, including running its warships at U.S. Navy ships and using drone aircraft to buzz U.S. forces. It has also loosened the reins on its militias in Syria to provoke U.S. forces there.

In the past, Iran’s Quds Force arm of its Revolutionary Guard Corps took a direct role in supplying IEDs to Shiite militia fighting in Iraq and targeting U.S. personnel. Estimates of over 1,000 American casualties were blamed on explosive devices manufactured by Quds Force personnel in Iran and Iraq, 500 Americans killed alone during Operation Iraqi Freedom.

Iran most recently has been flying its drone aircraft dangerously close to U.S. ships in international waters, including close calls during flight operations by the USS Nimitz battle carrier.

There have now been 14 circumstances in 2017 in which unsafe interactions between the U.S. and Iranian maritime forces have occurred, the Navy said.

The increase in direct confrontations with the U.S. mirror the same tactics used by North Korea in its own ramp up in its missile program; leading many analysts to believe both rogue regimes are sharing the same playbook.

What is clear though is that these actions are not the type of actions a state interested in peace undertake as the NIAC has consistently claimed. The mullahs have essentially shed all pretense at showing the world a moderate veil and instead are flexing their muscle in a blatant attempt to trying to bully and strongarm their neighbors.

Coupled with the increase in missile testing comes news that Iranian mullahs are preparing send a naval flotilla to the Atlantic Ocean. This follows a move by the Iranian parliament to allocate an additional $609 million for its missile program and support of increased terror and proxy operations through the Quds Force.

“No military official in the world thought that we can go round Africa to the Atlantic Ocean through the Suez Canal but we did it as we had declared that we would go to the Atlantic and its Western waters,” Iranian Navy Commander Rear Admiral Habibollah Sayyari was quoted as saying over the weekend.

“We moved into the Atlantic and will go to its Western waters in the near future,” Sayyari said.

“Thus far, the United States has responded to such violations with sanctions and designations of Iranian and foreign entities supporting Tehran’s ballistic missile development,” the organization found. “However, the U.N. and its member states have not responded. More must be done to investigate allegations of noncompliance and to punish violations of the resolution.”

Washington Free Beacon wrote that Iranian regime’s recent behavior shows the regime has not moderated since the nuclear deal was implemented. The Obama administration sold the deal in part on promises that it could help bring Tehran into the community of nations.

“Every time the Islamic Republic has cash, it chooses guns over butter,” told the Washington Free Beacon. “What the [nuclear deal] and subsequent hostage ransom did was fill Iran’s coffers, and now we see the result of that.”

“What [former President Barack] Obama and [former Secretary of State John] Kerry essentially did was gamble that if they funded a mad scientist’s lab, the scientist would rather make unicorns rather than nukes,” Washington Free Beacon continued. “News flash for the echo chamber: Iranian reformist are just hardliners who smile more. Neither their basic philosophy nor their commitment to terrorism have changed.”

Washington Free Beacon is right about how wrong the promises were made by the Iran lobby and Obama administration. We only hope it’s not too late to stop the mullahs and eventually start the process of regime change.