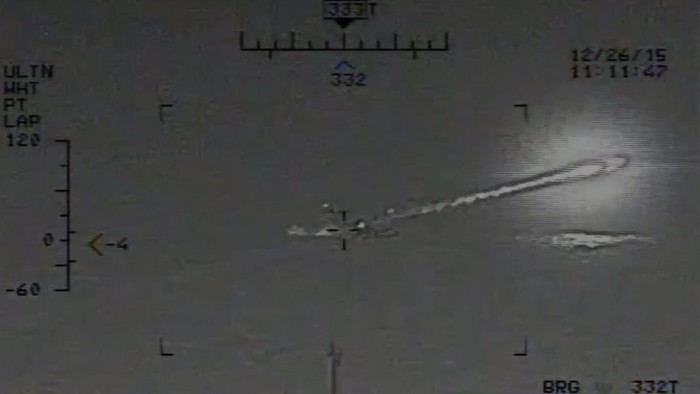 Definition: A hostile or argumentative meeting or situation between opposing parties.

The Iran regime has decided to live up to the meaning of the word “confrontation” in all its forms as it rapidly escalates a series of crises on several fronts.

The U.S. Navy released video this weekend taken by an American helicopter showing an Iranian Revolutionary Guards vessel firing unguided rockets last December near warships, including the aircraft carrier USS Harry S. Truman in the Strait of Hormuz as proof rebutting denials by the Iranian regime that it had launched the rockets.

A regime spokesman claimed the accusations by the U.S. were “false” and “akin to psychological warfare,” but had no rebuttal to the video evidence that was released clearly showing the regime had lied about the provocation.

The Navy said the rockets were fired “within an internationally recognized maritime traffic lane” as the Truman and the other ships, including commercial craft, were passing through the Strait of Hormuz into the Persian Gulf.

A U.S. Central Command spokesman at the time called the Iranian actions “highly provocative, unsafe and unprofessional” and said they called into question Iran’s commitment to the security of a waterway vital to international commerce.

But the firing of rockets near U.S. Navy warships was only one part of a much larger tapestry the regime is weaving of acts fueling violence across the Middle East at the direction and behest of the mullahs controlling Iran.

Jay Solomon reported in the Wall Street Journal of the growing fears in Washington and Europe that the nuclear deal reached last July with the Iranian regime has not brought the much-promised moderate turn from Iran, but rather has only emboldened and hardened its leadership.

“Since completion of the agreement in July, Tehran security forces, led by Supreme Leader Ayatollah Ali Khamenei, have stepped up arrests of political opponents in the arts, media and the business community, part of a crackdown aimed at ensuring Mr. Khamenei’s political allies dominate national elections scheduled for Feb. 26, according to Iranian politicians and analysts,” Solomon writes.

“Americans have set their eyes covetously on elections, but the great and vigilant nation of Iran will act contrary to the enemies’ will, whether it be in elections or on other issues, and as before will punch them in the mouth,” Khamenei told a meeting of prayer leaders this week.

“As much as $100 billion in frozen revenues are expected to return to Iran after sanctions are lifted, which U.S. officials said could happen in coming weeks,” Solomon notes. “Many of the companies about to be removed from international blacklists are part of military and religious foundations, including some that report directly to Mr. Khamenei. Those firms could be the first to benefit from the rush of international businesses looking to profit from the lifting of sanctions.”

The same month, two Iranian poets, each received decade-long sentences and 99 lashes for kissing members of the opposite sex and shaking their hands, Iranian state media reported. They have denied the charges.

In November, an Iran court convicted the Washington Post’s Tehran bureau chief, Jason Rezaian, of espionage and sentenced him to prison. The Post and Mr. Rezaian have denied the charges.

Things are getting so bad Congressional Democrats are intensifying pressure on the Obama administration to hold Iran accountable for its testing of ballistic missiles.

Both supporters and opponents of the multinational nuclear accord with the Iranian regime say that to maintain U.S. credibility in enforcing the deal, the White House must move forward with sanctions on Iran after two missile tests in the fall.

“They ought to impose sanctions because we have to show we take this seriously,” Rep. Jerrold Nadler (D., N.Y.), who backed the nuclear deal, said Friday. “Iran is very destabilizing, very aggressive and very badly behaved and we have to do what we can to stop that.”

But even with the renewed calls for action against the Iranian regime, there seems to be little appetite in the White House to engage in new confrontations with the mullahs during the last year of President Obama’s term in office, which has led to traditional U.S. allies such as Saudi Arabia to strike out and form their own coalitions in an effort to stymie Iranian regime’s aggressions.

The Arab League in a statement condemned the attacks on two Saudi diplomatic missions in Iran and accused the Iranian government of failing to protect the buildings, Reuters reported. The statement also condemned a militant group found in Bahrain reportedly backed by Iran’s Revolutionary Guard. All Arab League nations voted in support of the statement except Lebanon, where the Iranian-backed Hezbollah terror group holds serious sway.

Saudi Arabia Foreign Minister Adel Al-Jubeir, speaking at an emergency Arab League session called in Riyadh, Saudi Arabia, to discuss Tehran’s “terrorist acts” after attacks on the Saudi Embassy in Iran, said Arab nations must ensure that Iran is stopped from “meddling in the affairs of Arab nations.”

The actions by Arab League nations comes as the Iran lobby ramps up its verbal and PR attacks on Saudi Arabia in an effort to deflect attention on the Iranian regime’s new provocations. In fact, the regime’s chief lobbyist – the National Iranian American Council – has issued a flurry of editorials condemning Saudi Arabia, but not criticizing the regime’s recent acts including the crackdown against dissidents, the ballistic missile launches and firing of rockets at the U.S. Navy.

“If it seems like the Iranian government’s behavior is schizophrenic, that’s because it is. A small but powerful group of hardliners is trying to derail Rouhani’s foreign policy initiatives in an effort to weaken his domestic political power,” said Reza Marashi of NIAC in a piece for Vice News in which he attempted to blame the regime’s latest nefarious acts on a small group of hardliners.

He of course does not mention the political realities that the regime as a theocratic state is solely and particularly in making decisions regarding its strategic issues, is run at the whim of its Khamenei and the small, hand-picked group of mullahs in its Guardian Council and Assembly of Experts.

As the situation worsens, we should see even more hysterical editorials coming from NIAC and other lobby allies such as Lobelog and the Ploughshares Fund.