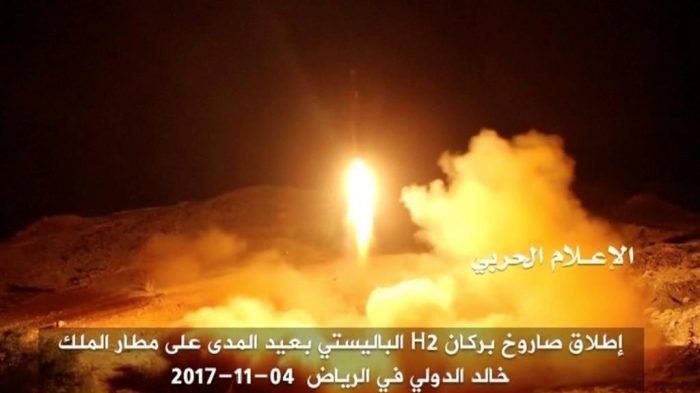 Over the weekend, Iranian regime-backed Houthi rebels lobbed a missile at the Saudi Arabian capital of Riyadh from Yemen in what is being described as an “act of war” by Saudi officials by the Iranian regime.

While tensions have long simmered between Saudi Arabia and Iran—rising to a boiling point with confrontations between the two in the Syrian civil war and Yemen—this is the marks the first-time theater-wide weapons have been introduced aimed at either countries’ capitals.

“We see this as an act of war,” said Adel Jubair, Saudi Arabia’s foreign minister, in a CNN interview. “Iran cannot lob missiles at Saudi cities and towns and expect us not to take steps.”

This latest provocation seems to be part of the larger chess game being played out between the two countries that includes clashes in Lebanon and Iraq as Saudi Arabia seems determined to step up to the plate and blunt the Iranian regime’s expansionist moves over the past several years as part of an effort to build a Shiite sphere of influence controlled by Tehran.

The two countries had only recently appeared to be working towards a rapprochement offered by the Iranians only to see the regime launch proxy military efforts in backing Houthi rebels in Yemen and using Hezbollah fighters from Lebanon in Syria; both moves seemingly aimed at isolating and diminishing Saudi influence.

The missile launched by the Houthis was intercepted before reaching the capital and while causing no damage, pushed the region dangerously closer to all-out war between the two countries.

The move by Iranian regime to allow such an act underlines how vastly stupefying promises were made earlier by Iran supporters and advocates such as the National Iranian American Council two years ago during negotiations over the Iran nuclear agreement that passage of the deal would embolden moderate forces within Iran and usher in a more moderate and stabilizing Iran.

It’s worth noting again how utterly wrong people such as Trita Parsi of the NIAC have been since then.

While it may be eminently satisfying to call out Parsi and his cohorts on how blatantly obvious it was to simply be shilling for the mullahs, the ramifications of the PR push to essentially grant Tehran a hall pass to sow terror and conflict throughout the Middle East are coming home to bear poisonous fruit.

Far from accepting the blame and pushing for moderation from the mullahs in Tehran, Parsi and the NIAC have only doubled down by aggressively going after the Saudi regime with a spate of editorials, social media posts and statements blasting Riyadh for everything from manipulating the Trump administration’s policies towards Iran to conspiring with conservative Republicans to start to eradicate Iran.

On the surface, the NIAC’s claims are ludicrous, but given the dark history of complicity by it and its allies within the Iran lobbying machine, it’s no wonder that Tehran feels emboldened enough to start lobbing missiles at Saudi Arabia.

Jubair detailed how the missile was smuggled into Yemen in parts and assembled by Hezbollah and Iran’s Revolutionary Guard Corps operatives and fired by Hezbollah from Yemen.

The fact that U.S., Saudi and other coalition naval warships have periodically caught Iranian fishing and commercial vessels smuggling weapons, ammunition and parts to Yemen from Iran have only strengthened these claims over the years of direct Iranian activity in the escalating war in Yemen.

Hezbollah’s participation is worrisome since the IRGC has often used the Lebanese-based terror group as its shock troops in conflicts such as Syria and in targeting U.S. service personnel over the past three decades around the world.

Earlier news disclosures of U.S. State Department cables published on WikiLeaks show that Yemen had acquired stockpiles of missiles from North Korea and that Iran may have shipped components of North Korean missiles to its Houthi allies who in 2015, with the support of Tehran, toppled the internationally-recognized government of President Abdu Rabbu Mansour Hadi and now control much of the countryside since then.

This new-found “Axis of Evil” between Iran, North Korea and terror groups such as Hezbollah, point out the highly volatile nature of Iranian regime’s expansion plans and how it has built a formula for conquest around using terror groups and insurgents to destabilize a country and then move in to consolidate its power and use it as a base of operations to stage even more actions.

It is a model used effectively in Lebanon, Syria and Yemen and has gained traction in Iraq, but was stymied in the Gulf states by swift action by Saudi Arabia.

The call came after the resignation of Lebanon’s prime minister pushed Beirut back into the center of a rivalry between Saudi Arabia and Iran and threatens to re-open that country to bloody conflict.

Even French President Emmanuel Macron is blaming Iran for the missile attack targeting Riyadh and said it illustrates the need for negotiations with Tehran over its missile development.

“The missile which was intercepted by Saudi Arabia launched from Yemen, which obviously is an Iranian missile, shows precisely the strength of their” program, Macron said late as he visited the United Arab Emirates and Saudi Arabia.

“There are extremely strong concerns about Iran” among its Arab neighbors in the Persian Gulf region over the missile launch, and “there are negotiations we need to start on Iran’s ballistic missiles,” he said.

All this flies in the face of the false promises made by Parsi and the NIAC and demonstrates clearly why any reputable news organization should think twice before providing air time or space for them to make such disreputable claims.

Clearly the Iran lobby has become one of the largest machines churning out “fake news” today.