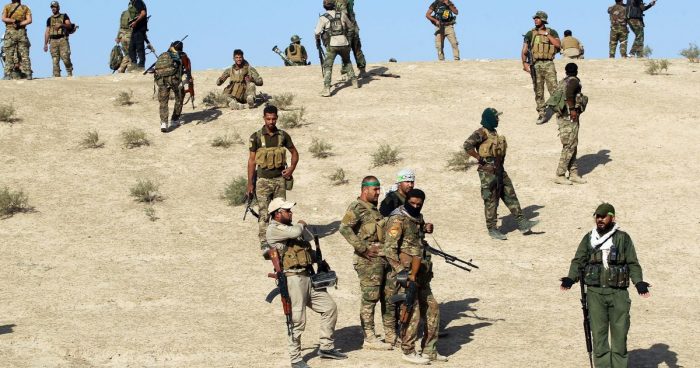 Since the US-led invasion of Iraq, the Iranian regime has ratcheted up its military involvement in its neighbors. At first, the regime used the tried and true tactics of using terrorist groups and proxies to strike at coalition forces during the insurgency in Iraq, killing and wounding thousands of troops primarily through explosive devices its Quds Forces made and delivered to Shiite militias.

It’s a model Iranian regime used to great effect through two decades of civil war in Lebanon through its Hezbollah terror partners, which it then expanded to use in the Syrian civil war in support of the Assad regime.

Similarly, the Iranian regime used the Houthis to launch another civil war in Yemen, aimed at destabilizing Saudi Arabia, a major coalition partner opposed to the Assad regime.

But what is the master plan for the mullahs in Tehran? What are they trying to gain from all of the machinations and manipulations?

Leaders of the Iranian regime in the face of opposition among their own loyal forces due to the heavy loses they have had particularly in the Syrian invasion, have numerously said that Syria and Iraq are their battle field to keep the enemy from fighting at home. i.e. using the same tactic they have been using since the beginning of the 1979 revolution, to create and export crisis in the region in order to cover up the internal crisis and the lack of capabilities to resolve such crisis. Hence one way to legitimize repression inside Iran has always been to point to the external crisis and the outside enemy.

While some try to project the Iranian regime’s meddling in Syria, Iraq and Yemen as a sign of strength, it is in fact the same crippling situation that forced regime’s top leader, Ali Khamenei, cornered by the sanctions to put a more friendly face out to the world and as such, manipulated the next election ballot to clear the field for Hassan Rouhani, a long-time loyal servant of the regime and a genial actor. In him, Khamenei saw his opportunity to fool the West, hoping for a change in the equation with Iran.

The creation of the Iran lobby, including US-based groups such as the National Iranian American Council, helped pushed that narrative during the run up for nuclear negotiations. For the mullahs, the completion of a nuclear deal was the linchpin to their plans since it set into motion the lifting of economic sanctions and the flooding of fresh cash back into coffers depleted by war.

While the infusion of cash and lifting of sanctions has opened the door to foreign investment for the first time in decades, the support for three wars is aimed at a more practical consideration: the creation of a Shiite-sphere of influence that buffers Iran from its neighbors and allows it access vital trade routes, economic markets and the ability to move assets freely without observation or restriction, however the main issue for the regime is its fear of uprisings at home and therefore its need for continuing with its meddling in the region.

For the mullahs, they have created a house of cards, each balancing on the other precariously and should one fall, the whole house collapses. Such is the flimsy nature of the mullahs hold and yet the West fails to fully grasp the leverage it has over the regime; leverage it abdicated when it chose to approve a nuclear agreement without linking Iran’s support for terrorism or improvements in human rights to it.

Nothing illustrates the complex interconnections the Iranian regime is striving for than the battle for Mosul in Iraq and for Aleppo in Syria. In both cases, the lack of a clear and decisive US policy has allowed the mullahs to manipulate the situations where Iranian-backed Shiite militias that used to attack US forces in Iraq are now attacking Sunni insurgents under US air cover.

The manipulation of this chessboard has many layers. For example, the lifting of economic sanctions was important in order for the regime to enter into deals with Boeing and Airbus to acquire new passenger airliners to replace a decrepit fleet which has seen hard use ferrying troops and weapons via an air bridge from Iran and Lebanon into Iraq and Syria.

Of paramount importance though to the long-range plans of the Iranian regime is the consolidation of friendly territory. For Khamenei and Rouhani, they envision an unbroken land stretching from the Mediterranean with Lebanon and Syria, through Afghanistan and Iraq to Yemen and even the Gulf states on the Persian Gulf and Indian Ocean.

It is a grand vision, but one that can only come to fruition through war, terror, bloodshed and violence. After all this is perhaps the only way they know to come out of the deepening crisis back at home.

The Iranian resistance movement has fought this complicated game plan for decades, but the West has largely not caught on and similarly combatted it; seeing it more in terms of short term agreements. The fact that the nuclear agreement only buys less than a decade of nuclear-free time is incredibly short-sighted and indicative of why the mullahs think they can win this game by being patient.

What is handicapping Tehran though is the inability to generate much economic improvement in the lives of ordinary Iranians who chafe under the yoke of oppression. This is the area of greatest risk to the Iranian regime where the people themselves are capable of changing the regime.

If the West ever realized the true potential it holds to advance change in Iran, then the future of the Iranian people could be helped immensely.

Let’s hope it doesn’t take too long to figure out that holding Iran accountable instead of rushing forward with trade deals is the better way to block Iranian regime’s roadmap.