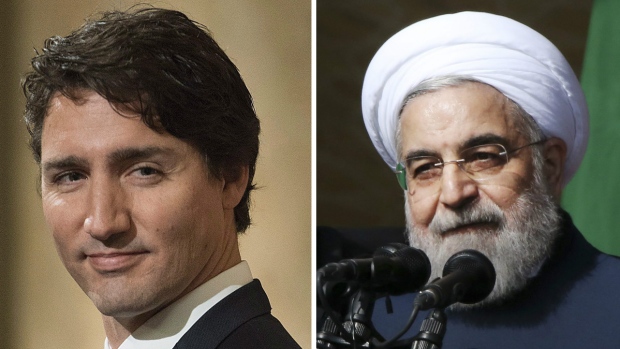 Incoming Canadian Prime Minister Justin Trudeau had expressed the hopes of improving relations with the Iranian regime, but those hopes are quickly running into the reality of the brutal policies and actions of the mullahs in Tehran.

Trudeau and Canada are learning the lessons from the Iranian regime playbook, much as the U.S. has had to learn the hard way, including the illegal abduction of its citizens. In this case, the plight of 65-year old Homa Hoodfar has placed Canada in the gun sights of the regime.

The university anthropologist was arrested by the regime this past weekend and thrown into Evin prison without charge. It was the second time she was arrested since arriving in Iran several months ago to do research work.

The regime accused Hoodfar, who holds both Canadian and Iranian passports, of “co-operating with a foreign state against the Islamic Republic of Iran.” A generic catch-all phrase the regime uses whenever it scoops up a dual-citizen like fish in a net. More often than not, the arrest is aimed at another agenda item for the mullahs.

In the case of several Americans held by Iran, Jason Rezaian, Amir Hekmati and Saeed Abedini, it was to serve as pawns to swap in a prisoner exchange in order to gain the release of suspected and convicted Iranian regime arms smugglers.

Shortly after Hoodfar’s family went public with her arrest and expressed concerns over health, the Iranian regime officials called out the Canadian government for failing to extradite an Iranian banker who settled in Toronto for what they call was his involvement in an embezzlement scheme.

The report, which appeared Wednesday from the Fars News Agency, says Pourmohammadi told reporters in Tehran that Canada “is not committed and has not rendered any co-operation” with its extradition request.

The Canadian branch of human rights group Amnesty International announced Thursday it would take up Hoodfar’s case and called on Ottawa to pressure Iran for her release.

“The arrest of respected and accomplished scholar, Dr. Homa Hoodfar, is the latest attempt by the Iranian authorities at targeting individuals, including academics, for the peaceful exercise of their rights to freedom of expression and association.” said Alex Neve, secretary general of Amnesty International Canada.

“It is deeply troubling that someone whose research focuses on addressing women’s inequality can find herself arbitrarily arrested and held, possibly in solitary confinement, without access to a lawyer and her family.”

The family said it was unclear why Hoodfar had been arrested and that she had been “conducting historical and ethnographic research on women’s public role.”

Analysts say the recent arrest of Hoodfar and others seems to be part of a concentrated effort by the regime to pressure dual citizens. In recent months, the unit that arrested Hoodfar has questioned dozens of people with two nationalities and arrested several.

Among the current prisoners of the regime include:

But the turbulence between Iran and Canada also extended into a contentious court case in which the regime lost a key battle when an Ontario judge ordered the regime’s non-diplomatic assets in Canada to be handed over to the victims of terrorist attacks by groups sponsored and supported by the Iranian regime.

“As Canada seeks to re-engage Iran it is critical that Iran continue to be held to account in Canadian courts for its terrorism and human rights abuses,” said Danny Eisen of the Canadian Coalition Against Terror, which represents victims and lobbied for a 2012 law allowing victims to collect damages from state sponsors of terrorism.

The only states designated sponsors of terror by Canada are Iran and Syria.

What Canada is experiencing though is par for the course for how the regime acts and intimidates nations. Just like the Iran lobby, the regime pushes out a message of moderation when in reality it is gearing up for policies of extortion, political blackmail and terrorist actions.

Policies of appeasing the regime have done little to actually effect change and only encourage the regime to be more aggressive. The classic example of that is the regime’s continued test firing of illegal ballistic missiles and the tepid response by the world community.

Alireza Jafarzadeh, Deputy Director of the Washington office of the National Council of Resistance of Iran, made a persuasive argument in an editorial in The Hill.

“The current U.S. policy toward Iran threatens to enable the regime’s behavior by channeling money into the hands of the individuals and institutions associated with the Iranian Revolutionary Guard Corps and the unaccountable foundations, who still exert the greatest influence on Iranian foreign policy,” he writes.

“With U.S. presidential elections just around the corner, there is good reason to hope that this policy will come to an end. But every influential person in Washington who recognizes the danger posed by Iran’s ballistic missile program must help to make sure not only that change is guaranteed, but also that it will lead to an alternative policy that specifically constrains the power of the IRGC and similar entities,” he adds.

The experience Canada is having is another reminder that the world should not be trusting the messages of moderation coming out of Iran and its lobby, but rather should only be judged on its actions.