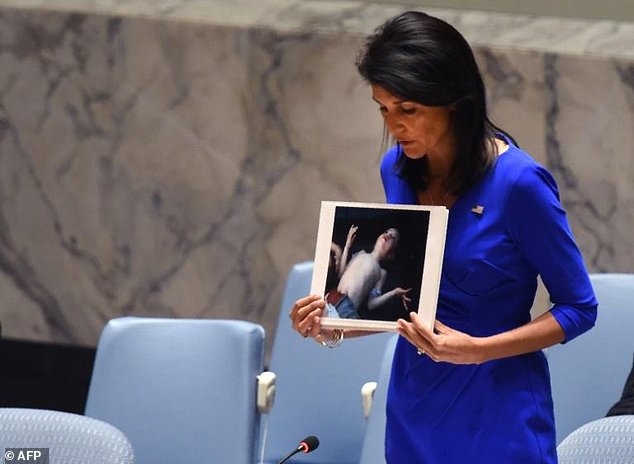 In the aftermath of the grisly chemical weapons attack on Syrian civilians that killed more than 100 men, women and children, the Iranian regime predictably stood by their man in Syrian president Bashar al-Assad, even as it publicly condemned the attack.

“Iran strongly condemns all use of chemical weapons regardless of who is responsible and who are the victims,” Foreign Ministry spokesman Bahram Ghassemi told reporters in Tehran, according to an account carried by the official Islamic Republic News Agency.

But Ghassemi cautioned against “rushed judgments and accusations that benefit … certain actors,” claiming that anti-Assad rebel groups — which Tehran calls “terrorists” — have also been known to have stored and used chemical weapons.

It’s a strange position to take since the only people attacked were in rebel-controlled areas. It is unlikely rebels would be dropping chemical agents on their own positions, but logic was never a strong suit of the Iranian regime.

Citing Assad’s frequent past use of chemical weapons, the Trump administration and governments across Europe have said Damascus was most likely behind the attack on the Syrian province of Idlib.

The reaction of Assad’s patron is not unexpected, but while media attention is focused on their denials, one important fact seems to be escaping most analysts’ attention which is the fact that Iran had previously committed to the removal of Syria’s chemical weapons earlier as part of an agreement to avoid President Obama’s infamous “red line” mandate.

The fact that chemical weapons were used, especially a more sophisticated compound in sarin gas, demonstrates the Iranian regime’s comfort level with its ally using these weapons.

On another account, Dr Joseph Kechichian, an author and writer, penned an editorial in Gulf News detailing how Iran actually continues to focus on interfering in the affairs of its neighbors.

“The intrepid Iranian spokesperson further rejected as groundless all of the claims made by several Arab leaders in their pronouncements that the Islamic Republic of Iran openly interfered in the internal affairs of Arab countries, saying that Tehran ‘never interfered in the internal affairs of any country and feels no need at all for such interference,’ which must also be challenged. He added his deep sorrow as several Arab and Muslim leaders, ‘either intentionally or by mistake… go astray and fail to distinguish friend from foe,’ allegedly because they point the finger at Iran instead of ‘dealing with the most important crises in the region,’” Kechnichian writes.

In fact, and lest the fearless Qassemi may have forgotten, it was Ali Akbar Velayati, a former Iranian minister of foreign affairs and an adviser on international affairs to Supreme Leader Ali Khamenei — as well as the president of the Expediency Council’s Centre for Strategic Research — who told a group of Yemeni clerics gathered in Tehran in October 2014 that “The Islamic Republic of Iran supports the rightful struggles of Ansar Allah [Al Houthis] and considers this movement as part of the successful materialisation of the Islamic Awakening [the name Iran uses for the Arab Uprisings] movements”.

Velayati boasted of Al Houthi victories in Yemen, which came to naught after the Kingdom of Saudi Arabia led a coalition to restore the legitimately elected president in Sana’a, even if the war is now in its third year. Velayati and his colleagues may be sure of an Al Houthi triumph in Yemen, though there is little to back that presumption, except that Tehran successfully managed to empower Al Houthis to play the same role that Hezbollah plays in Lebanon, he added.

Article in the Commentary Magazine added another perspective in the Iranian regime’s willingness to keep using Afghan refugees impressed into service as mercenary fighters for the regime’s campaigns.

“Increasingly, however, the Islamic Republic of Iran is replicating the former Soviet and Cuban strategies in Syria, where its intervention to support Bashar al-Assad has cost the Islamic Republic several thousand Iranian soldiers and cadets. The Iranian use of Hezbollah in Lebanon should have put permanently to rest any notion that Hezbollah has evolved into a Lebanese national organization. Rather, it remains what it always has been: A proxy for the Islamic Republic of Iran. But Hezbollah is not alone. A couple of years ago, I noted the increasing number of funerals of foreign nationals—especially Afghans—occurring in Iran whom Iranian news sources said had died fighting in Syria,” The Commentary Magazine writes.

The chemical attack in Syria is just symptomatic of the broader problem of the Iranian regime’s control of the battles being waged in Syria with the influence of the Revolutionary Guard Corps. Unless Iranian control is removed from the equation more Idlib attacks will happen.