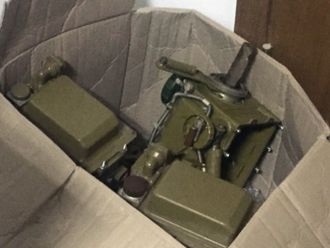 The start of the Trump administration is coinciding with a tougher time for the Iranian regime as it begins to suffer setbacks large and small, causing anxiety amongst the mullahs in Tehran as they try to figure out how to deal with President Trump.

Their initial comments to the new president were cautious and low key as Iranian regime Foreign Ministry spokesman Bahram Ghasemi told reporters on Monday that the Islamic state had no immediate pronouncement on Trump.

Ghasemi says that it’s “too soon to assess him and analyze his remarks, stance and the framework of his viewpoints.”

Ghasemi’s remarks mark the first official comment from Iran on Trump since his inauguration as the 45th American president.

That lack of response may be calculated to minimize the risk of antagonizing Trump or be placed in the infamous target of his tweeting habits which have laid low his political opponents, but for Iran the news to start the week only looked worse.

In the Syrian peace talks that began in Astana, Kazakhstan, Syrian rebel groups have rejected a plan that allows the Iranian regime to play a role in monitoring the ceasefire.

The proposal for a trilateral ceasefire commission, overseen jointly by the talks’ sponsors, is the most specific new measure set out in a draft communique the Russians hope to release on Tuesday, the second and closing day of the talks.

The Syrian fighting groups believe militia linked to Iran, such as Lebanon’s Hezbollah, are – along with Bashar al-Assad’s government – systematically breaching the ceasefire agreed on 29 December. The Syrian fighters believe Iranian regime, as perpetrators of innumerable ceasefire breaches, cannot credibly monitor or enforce a ceasefire, according to the Guardian.

As well as the ceasefire commission proposal, the leaked draft communique also broadly supports the existing UN talks process and calls for joint action to defeat Islamic State and other terrorist groups in Syria.

The fact that Syrian rebel groups actively engaged in fighting Syrian and Iranian regime military units have a seat at the table at last marks a significant step forward in diminishing Iranian influence in the long conflict.

The Syrian civil war erupted over opposition to harsh crackdowns by the Assad regime on the Syrian people and gaining momentum when Iranian regime opted to back Assad with Hezbollah fighters and cash to prop up the regime. The conflict escalated when the Iranian regime recruited Afghan mercenaries, Iraqi Shiite militias and eventually brought Russia into the civil war.

The prospect of peace talks moving forward that pushes the Iranian regime out of the way must be causing severe handwringing in Tehran, but more bad news came for Iran as Ukrainian authorities have confirmed that they seized a shipment of missile system components bound for Iran, according to official statements that could put the Islamic state in violation of international bans on such behavior.

The State Border Guard Service of Ukraine, or DPSU, announced late last week that it had seized at least 17 boxes filled with missile components bound for Iran, according to IHS Jane’s.

“The DPSU said that, during an inspection of the aircraft on 19 January, its personnel had found 17 boxes with no accompanying documents, which the aircraft’s crew said contained an aircraft repair kit,” according to the report. “Three boxes contained components that were believed to be for a Fagot anti-tank guided missile system, the rest contained aircraft parts.”

Days after this finding, the DPSU said that it had confirmed the missile components were destined for Iran’s Fagot system.

Michael Rubin, a former Pentagon adviser and expert on rogue regimes, said that Iran has been illicitly moving such weapons for quite some time.

“This isn’t the first time Iran has gotten caught red handed smuggling weapons with false manifests, for example, in 2010 in Nigeria,” Rubin said. “The question is how often does Iran get away with such smuggling and for what purpose? After all, if the weaponry is legal, there’s no reason for lying. If it’s not, Iran is violating international agreements. Either way, only fools and secretaries of state would trust Iran to uphold its agreements.”

While many countries around the world listened with concern to Trump’s protectionist inaugural address, Gulf Arab officials appear optimistic. In Gulf Arab eyes, that involves above all checking what they see as a surge of Iranian support for paramilitary allies in Syria, Iraq, Yemen and Lebanon and for fellow Shi’ite Muslims in Bahrain and Saudi Arabia’s oil-producing Eastern Province.

There have been tensions over Syria, where Obama dismissed Gulf Arab urgings to give more aid to rebels fighting President Bashar al-Assad, who has survived thanks to Iranian backing.

“Perception is important: Trump does not look like the kind of guy who will bend towards Iran or anyone else,” said Abdulrahman al-Rashed, a veteran Saudi commentator.

“If he behaves as he says, then we will see another Ronald Reagan, someone all the forces in the region will take seriously. That’s what we have missed in the past eight years, unfortunately.”

We can only hope that the Gulf States are right about the new president.