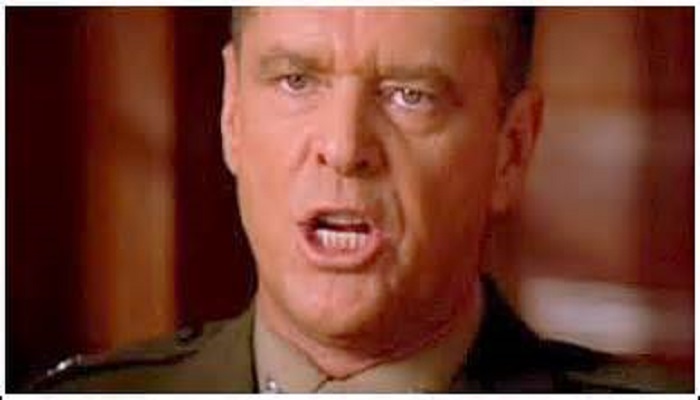 In the Hollywood blockbuster “A Few Good Men,” there is a pivotal courtroom scene in which Tom Cruise’s character, Navy Lt. Daniel Kaffee, presses Jack Nicholson’s hard bitten Marine Col. Nathan R. Jessup on the witness stand of a court martial as to whether or not he violated regulations and ordered a “code red” resulting in the death of a young Marine.

Col. Jessup asks Lt. Kaffee, “You want answers?” to which he replies “I want the truth!” and then Jessup’s explodes “You can’t handle the truth!”

It’s a turning point in the movie since it precedes Jessup’s admission that he indeed ordered the code red and broke the law, but his argument was that it was for the greater good of his command and the security of the nation.

The scene is a microcosm of the conundrum faced by the supporters of the Iranian regime as they enter the final two weeks before a self-imposed deadline to deliver a framework of an agreement for halting Iran’s nuclear weapons program. While regime loyalists such as the National Iranian American Council and its leaders, including Trita Parsi, Tyler Cullis and others have taken to the blogs and editorial pages of progressive media sympathetic to their cause, to push hard for an agreement granting the regime everything it wants and exempting it from Congressional review and approval.

In response, there has been a substantial backlash from both sides of the political aisle in the Senate and an unmistakable warning from Senate Republicans not to disregard the need for public comment, review and approval of any agreement. Arab nations with primarily Sunni populations such as Saudi Arabia have also publicly voiced growing concern about the impending deal to the extent that even after a hand-holding mission by Secretary of State John Kerry, the kingdom moved ahead with an agreement with South Korea to explore nuclear reactor development of its own.

On top of which Aviation Week reported over the weekend that the Iranian regime had produced its first-ever long-range cruise missile with a range of 1,300 miles. As the regime advances its missile technology, it is notable that its ballistic missile program which can deliver nuclear payloads has never been a part of ongoing nuclear talks.

Which leads us back to the central issue at hand which is the Iranian lobbying effort is built entirely of falsehoods because it cannot defend itself against the truth and it uses the veil of “peace” and “moderation” in a false attempt to justify the onward and steady march to nuclear capability the regional supremacy.

The truth has been that Iran’s mullahs have engaged in a decades-long effort to hide the truth of their nuclear weapons program. Even after having it revealed by intelligence agencies and resistance groups, it continued to stonewall inspections by international agencies even after pretending to cave in conceding to negotiations.

During that time, its lobbyists have sought to portray a changed Iran committed to peace, all the while it engaged a harsh and brutal stepped up crackdown at home on human rights, especially targeting political dissent, women and religious minorities. It has also been the cornerstone of expanded terror activities throughout the region.

All of which has been building to a classic confrontation to see if the regime’s lies can hold up against the mounting truth being told around the world; a truth expressed now in open calls by regime opponents to hold the mullahs publicly accountable and not give in to a “bad deal.”

The final truth people like Mssrs. Parsi and Cullis cannot handle is that if a proposed deal ever saw the light of public debate and scrutiny by the American people, it would die faster than a box office flop.