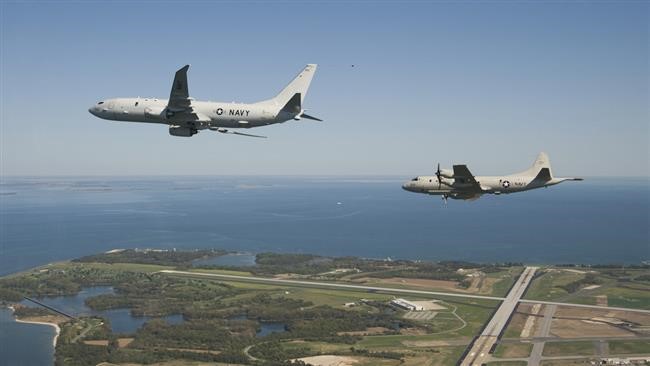 In a sign of the growing escalation in confrontations being manufactured by the Iranian regime, two U.S. Navy surveillance aircraft flying in international airspace near Iran were challenged and threatened by regime air defense stations over the weekend and told to change course or be shot down.

U.S. officials disclosed the aircraft were flying over the Strait of Hormuz on routine patrols, which the Iranian regime has used as a platform to intimidate commercial and naval ships with frequent run-ins with regime patrol and attack boats, often running courses directly at ships, ignoring warnings as severe as gunfire across their bows.

Using ground-to-air communications, officials at the Iranian air defense station told the crews they were flying near Iranian airspace and that if they didn’t change their course quickly they risked being fired upon, according to a spokesman for U.S. Naval Forces Central Command in Bahrain, Cmdr. Bill Urban.

“We will fire Iranian missile,” was one of the transmissions from the ground, he said. Both the American planes were threatened in three separate radio calls, Cmdr. Urban said in a statement.

U.S. State Department officials decried the incident, saying it showed Iran had yet to show signs of shifting from its aggressive stance in the region even after the international nuclear agreement reached last year.

“Frankly, there’ve been previous incidents much like this, and they’re concerning, obviously. They escalate tensions,” said Mark Toner, a State Department spokesman. ”We have conveyed our concerns to Iran.”

The Navy P-8 Poseidon with a crew of nine and an EP-3 Eries with a crew of roughly 24, were flying a reconnaissance mission 13 miles off the coast of Iran, through the Persian Gulf, Strait of Hormuz and Gulf of Oman, according to officials who call the boundary Iran’s “black line.”

Iran’s territorial waters—like all nations–extend 12 miles into the sea, according to international maritime law, neither aircraft breached the boundary line.

The US military planes ignored the warning and continued flying in international airspace, although close to Iranian territory, the officials told Fox News.

“We wanted to test the Iranian reaction,” one US official told Fox News when asked why the US jets were flying close to Iran.

“It’s one thing to tell someone to get off your lawn, but we weren’t on their lawn,” the official continued.  “Anytime you threaten to shoot someone down, it’s not considered professional.”

“This been a continuing issue with respect to Iranian intercepts,” said Lt. Gen. Jeffrey Harrigian, who is the top U.S. commander of the coalition air war against the Islamic State in Iraq and Syria.

The increasing frequency of incidents raises the question of why the regime is acting in such a provocative manner. Many within the Iran lobby have argued these acts are being committed by a small segment of hardliners within the Revolutionary Guard Corps who object to the opening up of Iran to the West as signaled by the nuclear agreement reached 14 months ago.

The line of reasoning attempts to mask the growing militant nature of the regime and the almost earnest efforts by regime officials to spark a conflict. One could almost surmise the mullahs actually are trying to provoke a response from the U.S. military in order to claim the moral high ground against the Great Satan, but why? For what purpose?

Most analysts agree that the supposed benefits of the nuclear agreement with the lifting of economic sanctions have not benefitted ordinary Iranians at all. Their economic condition remains bleak and as a result, there has been significant restlessness amongst the population, with large demonstrations over stagnant wages and rampant corruption taking place.

The regime, especially top mullah Ali Khamenei, have been vocal and outspoken in blaming the U.S. for the struggling economy and the perceived lack of benefits flowing from the nuclear deal, but what the mullahs don’t want to talk about is how they have decided to use most of the financial windfall the regime received, including the “ransom” payments of $1.7 billion for American hostages, to continue funding proxy wars in Syria, Iraq and Yemen and not spend it to improve the lives of Iranians.

Also, while the U.S. did lift its nuclear related sanctions last January, other sanctions, including financial ones, related to Iran’s ballistic missile program, allegations of state sponsoring of terror groups and human rights abuse claims remain.

Major international banks are unwilling to risk losing access to the dollar market or huge fines out of fear of inadvertently falling afoul of what they say are ambiguous U.S. regulations.

It is an ironic turn of events since the regime was adamant during negotiations that issues not related to nuclear programs be de-linked. Now the mullahs are paying the price for that decision.

This may explain why the regime is acting so aggressively in order to divert attention from the economic turmoil and political unrest and create a false crisis internationally. It is an old tactic and one the mullahs are dusting off in the hopes of overcoming the domestic discontent they are facing in spite of a massive crackdown at home on journalists, students and dissidents.

Ultimately it should not come as any surprise to see the regime increase these confrontations and try to provoke a response. Otherwise, their own necks might be on the line.