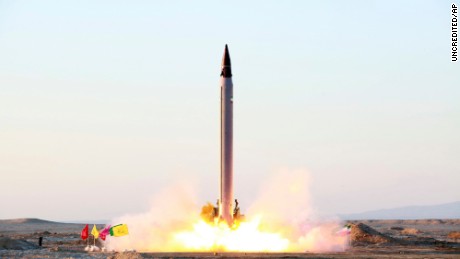 The old saying goes “The definition of insanity is doing the same thing over and over again and expecting a different outcome.”

If the world expects the Iranian regime to change its ways in the wake of a completed nuclear deal last July, the answer it is getting from the mullahs in Tehran is depressingly the same as evidenced by yet another test launch of a new ballistic missile design in violation of United Nations sanctions against the testing of ballistic missiles capable of carrying a nuclear warhead.

According to Fox News, western intelligence sources say the test was held Nov. 21 near Chabahar, a port city in southeast Iran’s Sistan and Baluchestan Province near the border with Pakistan. The launch took place from a known missile test site along the Gulf of Oman.

The missile, known as a Ghadr-110, has a range of 1,800 – 2000 km, or 1200 miles, and is capable of carrying a nuclear warhead. The missile fired in November is an improved version of the Shahab 3, and is similar to the precision guided missile tested by the regime on Oct. 10, which elicited strong condemnation from members of the U.N. Security Council.

The regime appears to be in a race against the clock to improve the accuracy of its ballistic missile arsenal in the wake of the nuclear agreement signed in July.

The Security Council is still debating how to respond to the regime’s last test in October and therein lays the problem. While the world debates what to do in responding to the regime’s provocations, the regime continues on blissfully uninterrupted in its preparations.

The same scenario plays out in regards to the regime’s new offensive in Syria and its crackdown at home in an alarming rise in human rights abuses; all of which has been met by mostly silence and hand wringing in the rest of the world.

The regime’s new-found militancy has included a buying binge with Russia for new arms as a top aide to Russian president Vladimir Putin confirmed.

“When all the restrictions are removed and all the sanctions are lifted we will have quite a serious development in the field of military-industrial cooperation. It is already taking place in fields that are not covered by sanctions, and in future we are expecting to enter very large projects,” Vladimir Kozhin, a top military-industrial cooperation aide said in an interview with Izvestia daily.

The official added that Iran has shown great interest in cooperation with Russian weapons companies because practically all of its military forces require a major overhaul.

“Considering the fact that this is a large country with large military forces, we are talking very big contracts, worth billions,” Kozhin noted.

And now that the regime is due to receive a $100 billion payout as early as January because of the nuclear deal and a rushed incomplete investigation by the International Atomic Energy Agency that rubberstamped the regime’s compliance, the mullahs are due to get a huge payday.

The continued lack of action in the face of regime’s actions covers the large-scale such as military weapons to the small issues affecting individuals and their families as Washington Post reporter Jason Rezaian continues to languish in a regime prison on trumped up espionage charges; his incarceration now passing 500 days in captivity.

Even more disturbing is a report from cybersecurity firm Symantec which claims that regime hackers are using malware to spy on individuals including Iranian dissidents and activists.

The attacks aren’t particularly sophisticated, but the hackers have had access to their targets’ computers for more than a year, Symantec said, which means they may have gained access to “an enormous amount of sensitive information.”

Two groups of hackers, named Cadelle and Chafer, distributed malware that steals information from PCs and servers, including from airlines and telcos in the region, Symantec said.

“Reports have shown that many Iranians avail of these services to access sites that are blocked by the government’s Internet censorship,” Symantec wrote. “Dissidents, activists, and researchers in the region may use these proxies in an attempt to keep their online activities private.”

All of which means the regime is stepping up its efforts to identify specific and individual activists and dissidents, especially those living within Iran who may be communicating with outside dissident groups, as a means of tracking them down and arresting them.

It is a bitter irony that International Human Rights Day is approaching this week in light of this increased activity by the Iranian regime and highlights that no matter how the international community might buy the propaganda being spewed by regime lobbyists such as the National Iranian American Council; the reality has been much different.

If the attacks in Paris and San Bernardino do not wake up those who still refuse to believe that the rising tide of Islamic extremism is flowing from radical safe havens such as Syria and Iran is an imminent threat, then the Iranian regime’s actions in firing another missile in direct violation of sanctions should be an urgent alarm bell