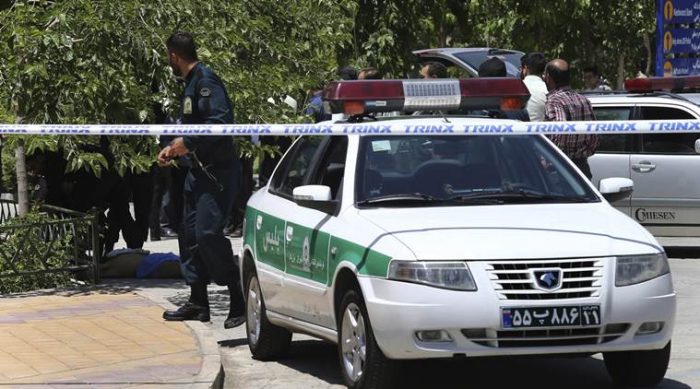 The body of a terrorist, at background left, lies on the ground while police control the scene at the shine of late Iranian revolutionary founder Ayatollah Khomeini, just outside Tehran, Iran, Wednesday, June 7, 2017. Several attackers stormed into Iran’s parliament and a suicide bomber targeted the shrine of Ayatollah Ruhollah Khomeini on Wednesday, killing a security guard and wounding 12 other people in rare twin attacks, with the shooting at the legislature still underway. (AP Photo/Ebrahim Noroozi)

An attack by six assailants armed with rifles and explosives took Iranian regime security forces by surprise the other day in a series of attacks aimed at the heart of the government, including a takeover of the Parliament building and the tomb of the regime’s founder, leaving a dozen dead and 46 wounded that shook the religious theocracy ruling Iran.

The attacks lasted for hours and was claimed by ISIS, which if true, would represent the first successful attack by the terror group on Iranian soil and a significant and somewhat ironic turn of events in the growing sectarian conflict between and extremist Sunni and extremist Shiite ideologies.

Predictably, the default response from Iranian officials was to point the finger of blame at regional rival Saudi Arabia and even Iranian dissident groups such as the Mujahedeen-e Khalq. As Iranian officials struggled in the wake of the attack, one could sense confusion and even a slight note of panic setting in as the prospect of Tehran joining the ranks of cities such as London, Paris and Berlin as prime terror targets began to seep.

For the Iranian regime, much of the blame for the notable rise in Islamic extremist groups lies squarely on its doorstep. The mullahs constant vitriol aimed at Israel, the U.S. and the its Sunni Arab neighbors has only made routine the kind of hate that groups like Hezbollah have acted on for decades.

The use of proxies and terrorist groups has always been a part of the statecraft toolbox for Iran as it has used Hezbollah and the Houthis to conduct open warfare in Syria and Yemen, meanwhile bolstering Shiite militias in Iraq to push Sunnis out of the coalition government there and into the waiting arms of ISIS recruiters.

According to the New York Times, tensions in the Middle East were already high following a visit by President Trump last month, in which he exalted and emboldened Saudi Arabia, Iran’s regional rival. Saudi Arabia and several Sunni allies led a regional effort on Monday to isolate Qatar, the tiny Persian Gulf country that maintains good relations with Iran

In a statement, the Revolutionary Guards Corps said, “The public opinion of the world, especially Iran, recognizes this terrorist attack — which took place a week after a joint meeting of the U.S. president and the head of one of the region’s backward governments, which constantly supports fundamentalist terrorists — as very meaningful,” a reference to Saudi Arabia’s ruling monarchy.

Saudi Arabia swiftly rejected the claim and the Trump White House, while expressing sympathy for the victims, was quick to note that “states that sponsor terrorism risk falling victim to the evil they promote” in a statement.

The MEK also denied any involvement and accused regime officials of a smear attack saying “their intention is to either use this event” against the group or justify their own previous crimes” in a statement.

But that didn’t stop members of the Iran lobby from stepping up to also blame Iranian dissident groups for the attack either directly or indirectly.

Paul R. Pillar, a stalwart for the Iran lobby, wrote in Consortium News blaming the MEK for alleged terrorist attacks in Iran and claiming that prior attacks had left the regime much better prepared to counter terrorism.

We hate to tell Pillar that his measure of “preparedness” by Iranian security forces leaves much to be desired judging by the daylong standoff at the Parliament building.

Pillar even begins laying the ground work for the Iranian regime to step up its terrorist activities in the wake of the attacks saying “in the months ahead, Iran may take actions outside its borders in response to the attacks.”

“Iran may see a need to be more aggressive in places such as Iraq or Syria in the interest of fighting back against ISIS,” Pillar said.

His comments are instructive since the mullahs are likely to use the attacks as an excuse to step up their fights in Syria in to preserve the Assad regime and in Yemen to continue destabilizing the border to Saudi Arabia.

It is not inconceivable that the Iranian regime will use the attacks as a pretext to launch fresh initiatives in places such as Bahrain and Qatar to further split apart the Gulf states and weaken opposition to its regional ambitions to build a Shiite sphere of influence.

Pillar wasn’t alone in trying to drag the MEK into the mud, as Trita Parsi of the National Iranian American Council, gleefully attacked the resistance group in interviews claiming that the MEK was equipped to carry out these attacks because of its channels into the regime and its ties to Saudi Arabia.

“If the goal was to penetrate and destabilize Iran, the MEK clearly was Saudi Arabia’s best bet,” Parsi said. “Still unclear who’s behind the current attack in Iran, but the MEK (and their Saudi backers) are a main suspect. Timing is of course curious. Just last month, A Saudi Crown Prince said Riyadh is working hard to take battle to inside of Iran.”

Parsi and Pillar offered no proof, only suspicions that read like they came from a talking points memo from Ali Khamenei’s office as Iran struggles with the aftermath of the attacks and desperately seeks any scapegoat other than its own support for terrorism.

The roots for these attacks lie squarely in the Iranian regime’s long history of exporting terror as a tool and it has finally come home to bite them.