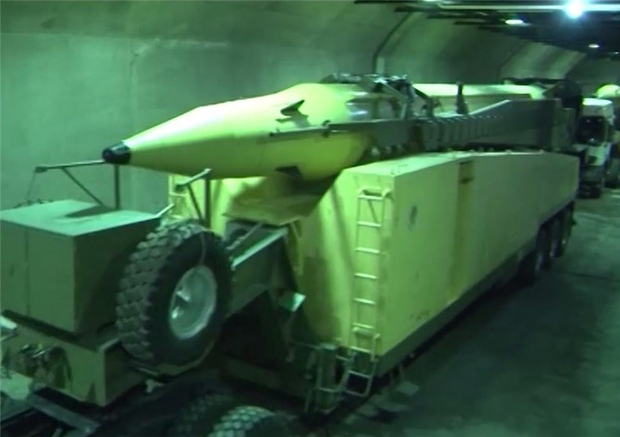 In the wake of the flip flop by the Obama administration to halt the imposition of new sanctions on the Iranian regime for its test firings of Emad ballistic missiles violating a United Nations Security Council resolution last week, the regime unveiled a new underground missile depot prominently featuring the same Emad missile in a blatant thumbing of its nose to the rest of the world.

Regime news agencies and state television video said the underground facility, situated in mountains and run by its Revolutionary Guards Corps, was inaugurated by the speaker of parliament, Ali Larijani. Release of the one-minute video followed footage of another underground missile depot released last October.

U.S. officials say the Emad, which Iran tested fired in October, would be capable of carrying a nuclear warhead and they say Washington will respond to the Emad tests with fresh sanctions against Iranian individuals and businesses linked to the program, but the administration reversed course at the last minute, first announcing a press conference and then canceling it.

The Iranian regime’s boasting about its missile capabilities is a direct challenge for the Obama administration as the U.S. and European Union plan to dismantle nearly all international sanctions against Tehran under the nuclear deal reached in July.

The regime’s provocations undermine all of the reassurances given by supporters of the nuclear deal who claimed it would pave the way for a more moderate and engaged Iranian regime.

After Iran tested the Emad missile in October, the UN Security Council’s panel of experts declared Iran in violation of resolution 1929, adopted in 2010. It prohibits the launching of any missile capable of carrying a nuclear warhead, and remains valid until the July nuclear deal between Iran and the five permanent members of the UN Security Council — the US, UK, Russia, China, and France — plus Germany goes into full effect. That won’t happen until Iran has fulfilled all of its obligations to scale back its program under the agreement, at which point Iran will be “called upon” by the Security Council to cease any missile testing for a period of eight years.

As the Chicago Tribune editorialized yesterday: “As the U.S. backpedaled, the Iranians pressed their advantage: Iranian President Hassan Rouhani proclaimed on Thursday that he was so incensed by proposed U.S. sanctions that he had instructed the military to expand Tehran’s missile program ‘in terms of range and accuracy.’ You don’t like two missile launches? How about 20?

“Days later, the Iranian Navy launched rockets within 1,500 feet of an American aircraft carrier and a French frigate in the Strait of Hormuz.”

“The U.S. and its partners have only one chance to establish that strict compliance from Iran will be expected through the course of this nuclear deal. That chance comes right now, before sanctions are lifted, before millions of dollars flow into Tehran’s economy,” the Tribune went on to say. “The U.S. should impose those sanctions for the missile tests. Iran won’t walk from the deal. It desperately needs that sanctions relief. And if it does walk away, that will serve notice that Iran never did intend to comply.”

The Tribune was not alone in its skepticism of the Iranian regime. Daniel W. Drezner, a professor of international politics at the Fletcher School of Law and Diplomacy at Tufts University, writing in the Washington Post said:

“It is possible that no amount of Obama administration hand-holding and backstopping was going to placate the anxiety of the Sunni states in the wake of the Iran deal. Still, if you look at the past year, the administration seems to have devoted very little time to gardening in the Gulf region. Which guarantees continued bloodshed in Syria, Yemen, Iraq, and . . . I’ve lost count of the sectarian conflicts at this point,” Drezner says.

“It is still likely that the Iran deal will continue to be implemented. But it also seems increasingly likely that the negative externalities of negotiating the deal are rendering it far less significant in advancing the oxymoron that is ‘Middle East stability,’” he added.

All of which goes a long way in explaining the recent escalation in tensions between the Iranian regime and its Arab Gulf state neighbors as Saudi Arabia, Kuwait, Bahrain, Sudan and the United Arab Emirates have all severed ties to the Iranian regime.

For those states which lie only a few hundred miles away from Iran, the threat of the Emad missile is much more real and practical than for the U.S., but no less worrisome is the retreat of U.S. willpower in the face of Iranian aggression under this administration. The message has been unmistakable for many of U.S.’s long-time allies in the region:

You’re on your own.

The Iran lobby was particularly humorous in its most recent statements of support for the mullahs in Tehran as Trita Parsi from the National Iranian American Council actually advocated the idea that Saudi Arabia was pushing for an armed conflict with Iran in order to gain back U.S. support against its long-time foe.

Predictably, Parsi raised the potential of the U.S. cutting loose Saudi Arabia as part of its strategic “realignment” towards Iran with a certain amount of glee.

He offers up the most ironic statement of all when he writes:

“If Washington’s priority is the defeat of IS and other jihadist movements, then a balancing act between an Iran that ferociously opposes IS and a Saudi Arabia that has played an undeniable role in promoting jihadi extremism may not be the right answer.”

The fact that Parsi actually tries to portray the Iranian regime as a standard bearer against Islamic extremism is the height of hypocrisy. It’s like saying the Nazi Party are sponsors of Jewish festivals. We would suggest Parsi reacquaint himself with Iranian regime justice by Googling “Iran executions” and watching some video of the mullahs’ “moderation.”