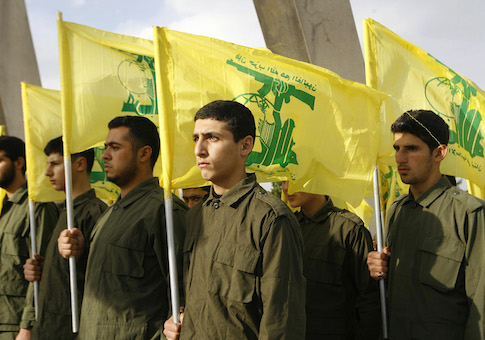 In this picture taken on Friday Feb. 14, 2014, Hezbollah fighters hold flags as they attend the memorial of their slain leader Sheik Abbas al-Mousawi, who was killed by an Israeli airstrike in 1992, in Tefahta village, south Lebanon. Hezbollah says Israel carried out an airstrike targeting its positions in Lebanon near the border with Syria earlier this week, claiming it caused damage but no casualties. Hezbollah said the attack was near the eastern Lebanese village of Janta. It vowed to retaliate but said it will “choose the appropriate time and place.” (AP Photo/Mohammed Zaatari)

Unsurprisingly, the U.S. State Department once again listed the Iranian regime in its annual Country Reports on Terrorism; keeping it atop a dubious list of countries involved in the sponsorship and support of terrorism.

The report based the designation on the regime’s continued support for terrorist proxies such as Hezbollah and its overall efforts to destabilize the Middle East as a whole as evidenced by its spurring of the Houthi rebellion in Yemen and its long support for the Assad regime in Syria, as well as the rapid growth of Shiite militias in Iraq involved in new rounds of sectarian warfare with Sunni tribes.

The report cited a wide range of activities the Iranian regime has undertaken to foster the spread of terror and violence:

“Iran used the Islamic Revolutionary Guard Corps‑Quds Force (IRGC-QF) to implement foreign policy goals, provide cover for intelligence operations, and create instability in the Middle East. Iran has acknowledged the involvement of the IRGC-QF in the conflicts in Iraq and Syria and the IRGC-QF is Iran’s primary mechanism for cultivating and supporting terrorists abroad,” the report said.

“In 2016, Iran supported various Iraqi Shia terrorist groups, including Kata’ib Hezbollah, as part of an effort to fight ISIS in Iraq and bolster the Assad regime in Syria. Iran views the Assad regime in Syria as a crucial ally and Syria and Iraq as crucial routes to supply weapons to Hezbollah, Iran’s primary terrorist partner. Iran has facilitated and coerced, through financial or residency enticements, primarily Shia fighters from Afghanistan and Pakistan to participate in the Assad regime’s brutal crackdown in Syria. Iranian-supported Shia militias in Iraq have committed serious human rights abuses against primarily Sunni civilians and Iranian forces have directly backed militia operations in Syria with armored vehicles, artillery, and drones,” the State Department added.

In another nod to the Iranian regime expanding its actions to destabilize the Gulf states, the report also detailed how “Iran has provided weapons, funding, and training to Bahraini militant Shia groups that have conducted attacks on the Bahraini security forces. On January 6, 2016, Bahraini security officials dismantled a terrorist cell, linked to IRGC-QF, planning to carry out a series of bombings throughout the country.”

And contrary to the repeated denials of regime officials and the Iran lobby, Iran has “remained unwilling to bring to justice senior al-Qa’ida (AQ) members it continued to detain and has refused to publicly identify the members in its custody. Since at least 2009, Iran has allowed AQ facilitators to operate a core facilitation pipeline through the country, enabling AQ to move funds and fighters to South Asia and Syria.”

The facilitation of terrorism from within its own Quds Forces and through external terror groups directly under Iran’s control such as Hezbollah, as well as others it has shielded such as Al-Qaeda and helped facilitate such as ISIS, points out the consistent lies perpetuated by the Iran lobby and regime supporters in maintaining that Iran’s government was locked in a power struggle with “moderate” elements.

There are no moderate elements within the regime’s government.

Supporting terror is a tool of statecraft for the Iranian regime and an important lever the mullahs in Tehran use frequently to advance their foreign policy goals.

This is also the reason why the Iran nuclear deal was never going to work in the first place since it did nothing to change the behavior of the mullahs. They remain as intent as ever on spreading their extremism, known as “Shia sphere” of influence and using violence to achieve it, which is why the Trump administration has moved on imposing additional sanctions even as it certifies the regime in compliance with the nuclear agreement.

The Iran lobby, especially advocates such as Trita Parsi of the National Iranian American Council, have shouted to the rooftops that Iran mullahs are acting in a moderate and open manner with respect to the nuclear agreement, but refuse to acknowledge the near-homicidal behavior of mullahs regarding terrorism and war.

There can be no clear approach to Iranian regime without recognizing the linkages that exist between the regime’s behavior on terror and human rights, as well as its approach to nuclear weapons development. The great flaw in the Obama administration’s approach to Iran was to treat these issues as separate and apart.

It’s a silly notion since one can no more divorce a substance abuser from one drug than he starts using another. For the Iranian regime, violence is its narcotic of choice and it is addicted to it in all facets of its society.

This explains why the Iranian regime reacted so violently to the continued run of new sanctions by the Trump administration which led its leaders to make some outrageous boasts and demands this week.

Iran’s president, Hassan Rouhani, said on Wednesday that Iran would stand up to the U.S. and hit back with its own sanctions.

Meanwhile his foreign minister, Javad Zarif, took to CBS News to warn that the sanctions could jeopardize the nuclear deal; a curious position to take since President Trump seems intent on scrapping it in the first place.

Also on Wednesday, Gen. Mohammad Ali Jafari, head of Iranian regime’s Revolutionary Guard, warned the U.S. against imposing sanctions on the paramilitary group. He said the Guard’s missile program is not negotiable and hinted that new sanctions could put U.S. military bases in the region in danger.

“If the U.S. intends to pursue sanctions on the Guard, it should first disassemble its military bases within 1,000 kilometers, or 620 miles,” Jafari was quoted as saying by state TV, apparently referring to the range of Iranian missiles.

It was a not-too subtle threat against U.S. bases in Qatar, Kuwait and Bahrain all of which ties back to the original point made in the State Department’s annual report: the Iranian regime can never be trusted.