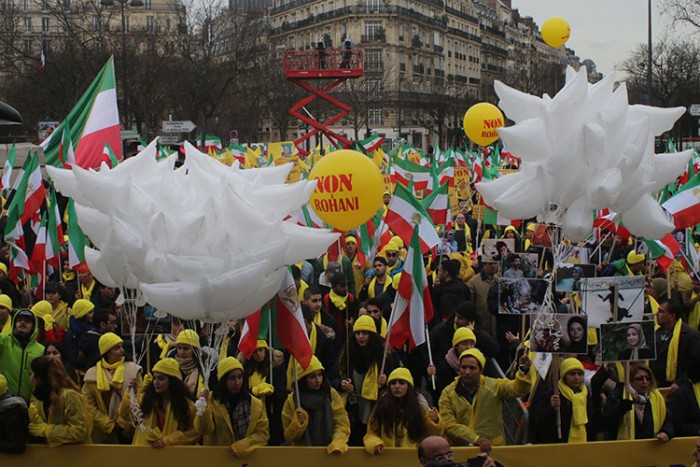 As Iranian regime leader Hassan Rouhani arrived in Paris for the second half of his European tour, thousands of protestors gathered at Place Denfert-Rochereau to demonstrate against his presence and give voice to the brutality that has been meted out during his term against dissidents, religious minorities, women, children and ordinary Iranians in gross violations of human rights.

The protests included French political figures, Iranians, human rights groups and other activists who called on French leaders to reprimand Rouhani for the terrible human rights conditions in Iran, as well as the long-term policies of support for terror groups and the spread of Islamic extremism including the long-running Syrian civil war.

The list of noteworthy participants at the protests included:

The large demonstration represented a tangible reminder to world media that Rouhani was not being welcomed with open arms in Europe, as a sizable contingent of French citizens joined in protests amid the still resonating pain of the Paris attacks that left 130 dead. Rouhani’s presence – far from being a PR coup for the regime – provided the opportunity for news media to see a visceral opposition to Rouhani and the theocratic regime as a whole.

It was also a reminder that far from being the “moderate” portrayed by the regime, Rouhani faithfully tows the party line in pushing unpopular positions such as the Iranian regime’s insistence that Syrian dictator Bashar al-Assad stay in power; dashing hopes for a quick political resolution to the bloody conflict that has forced the largest mass migration of refugees since World War II.

Asked at a news conference in the Élysée Palace whether Tehran would drop its support for Assad, Rouhani called the question “strange.”

“Syria’s problem is not a question of people. The problem is terrorism and Islamic State,” Rouhani said, standing beside French President François Hollande, who has repeatedly called for Assad to step down.

The stalemate over Assad bodes ill for a meeting set for Friday in Vienna, where Western governments hope to meet with Russia, Iran and other countries in the region as well as the Syrian regime and opposition to push for an end to the nearly five-year war.

Another further illustration of the harsh nature of the regime came in a three-minute video released by top mullah Ali Khamenei in which he questioned the Nazi Holocaust. The video – entitled “Holocaust: Are the Dark Ages Over?” – plays on of Khamenei’s speeches in which he said “No one in European countries dares to speak about the Holocaust, while it is not clear whether the core of this matter is reality or not. Even if it is reality, it is not clear how it happened.”

The questioning of the Holocaust is a matter of rote exercise for the regime as famously uttered by Holocaust denier Mahmoud Ahmadinejad and has almost become an article of faith among the mullahs in Tehran and a perennial sore point in relations with the West.

That lack of concern over such deplorable events in human history carries over in the regime’s day-to-day disregard for human rights in virtually all phases of Iranian society and jurisprudence. The Daily Mail ran a powerful photographic series from Sadegh Souri who shot pictures documenting the harsh treatment and plight of young girls and women awaiting death sentences in Iranian prisons.

In Iran, the second-biggest user of capital punishment in the world, young women can be hanged for crimes, following unfair trials, including those based on forced confessions extracted through torture and other ill-treatment.

The frightened girls are imprisoned in a Juvenile Delinquents Correction Centre after their sentence verdict and a large number of the inmates are then killed when they reach 18.

In Time magazine, Matthew Trevithick, one of the American hostages released in the prisoner swap with Iran, recounted his arrest and 41 day imprisonment, in which he was studying Farsi in Tehran only to be placed under surveillance, then arrested and told he was never going to be leaving Iran again.

During his imprisonment, Trevithick was told to lie to his mother about his whereabouts and then regime interrogators demanded he videotape a confession that he worked for the CIA and had access to arms and cash. He said no and then was sent back to Evin prison where interrogators questioned him about any ties to journalists he might have had.

Trevithick noticed that the other prisoners he was with were all artists, dissidents and intellectuals; everyone who could be viewed as a problem for the regime was being locked up. Even as he is finally released, the regime officials at the airport make him pay a fee for overstaying his student visa.

The absurdity of the situation is balanced by the fact that virtually no news organization knew of his incarceration, nor of the efforts to coerce a confession from the American student who had traveled to Tehran lured by the false sense of security promulgated by the Iran lobby such as the National Iranian American Council and ended up spending 41 days in prison.

Unfortunately for the thousands of other dissidents, women and children languishing in Iranian prison, their hopes for release are much dimmer.