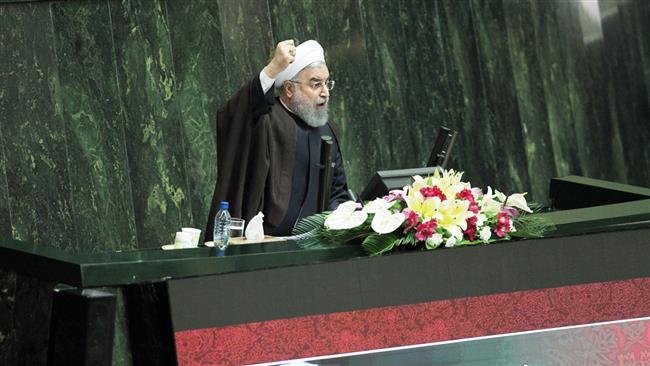 One of the key provisions of the Iran nuclear deal was an agreement to not include so-called “side issues” into the agreement such as the regime’s sponsorship of terrorism or any improvement in its human rights record.

The mullahs in Tehran knew they would instantly fail any of those litmus tests and fought hard to keep them out of the agreement, but in doing so they set themselves up for failure down the road when continued abuses would force the U.S. to act in levying new sanctions for terrorism support and Iran’s burgeoning ballistic missile program.

The mullahs found themselves stuck between a rock and a hard place. The nuclear agreement did not contain any language prohibiting economic sanctions on non-core nuclear issues per the mullahs’ demands so as the Trump administration and U.S. Congress imposed new sanctions the mullahs were left to cry foul without any basis to stand on.

The Iran lobby then went to work trying to stave off sanctions by pushing the message that these additional sanctions would threaten the “essence” of the agreement and cause its collapse leading to Iran building a nuclear arsenal.

Trita Parsi of the National Iranian American Council tried to blame President Donald Trump for the potential collapse of the deal and issued a statement that reeked of falsehoods commonly trotted out by the Iran lobby.

“It should now be clear that Donald Trump’s moves to violate and hold certification of the Iran nuclear deal in doubt are actively destabilizing the accord. Unfortunately, in response to Trump’s increasingly hostile rhetoric, as well as Congress’ moves to escalate sanctions, Iran is now warning that it has its own options to back out of the deal if the U.S. continues to undermine it,” Parsi said.

Let’s be clear: Iranian regime, not the U.S., is responsible for destabilizing the nuclear deal with their bloody war in Syria, efforts to sow insurrection in the Gulf states, and start launching ballistic missiles at a clip rivaling North Korea. The U.S. did nothing to inspire those acts and all those acts began actually years ago and under the Obama administration.

Also, the U.S. Congress and American electorate has had the luxury to see how the nuclear deal has turned out after two years and their answer has been overwhelmingly negative. While Parsi may try to affix blame on President Trump, the real culprits are in Tehran.

But Parsi didn’t stop there.

“We have repeatedly warned that President Trump’s beating of the war drum with Iran, even if confined to rhetoric, in addition to new Congressional sanctions and zero diplomatic outreach, could only produce negative consequences. Iran’s parliament has now voted to increase spending on its ballistic missile program and the IRGC in direct response to new sanctions on the country,” Parsi added.

Incredibly, Parsi tries to also blame the U.S. President for Iranian regime’s decision to ramp up its missile program; ignoring the fact the regime’s missile program was begun a decade ago with technology licensing agreements with North Korea and fully funded by illicit oil sales.

It is a blatant example of how the Iran lobby tries to rewrite history to protect the Iranian regime after it acts to toss away the international agreements it signs.

Regime president Hassan Rouhani did his part in warning the regime could quickly ramp up its nuclear program and achieve an advanced level if the U.S. continued its “threats and sanctions.”

Rouhani’s remarks to Iranian regime lawmakers were his most direct warning that the deal could fall apart and risked ratcheting up tensions with the United States.

While most media focused on Rouhani’s threats, virtually no one picked up on the key inconsistency he made which is that Iran could “quickly” build nuclear weapons. This simple declaration proves the biggest lie offered by the regime and Iran lobby supporters such as Parsi: the nuclear deal did not push back the much-debated “breakout” period for Iran to build a nuclear device.

“In an hour and a day, Iran could return to a more advanced (nuclear) level than at the beginning of the negotiations” that preceded the 2015 deal, Rouhani said.

The nuclear deal has been a complete and utter failure.

United Nations ambassador Nikki Haley issued a stern and forceful rebuke to Rouhani’s comments and accurately pointed out the problem with the arguments being made by the Iran lobby about saving the nuclear deal at all costs.

Haley said on Tuesday Iran must be held responsible for “its missile launches, support for terrorism, disregard for human rights, and violations of U.N. Security Council resolutions.”

“Iran cannot be allowed to use the nuclear deal to hold the world hostage … The nuclear deal must not become ‘too big to fail’,” Haley said in a statement, adding that new U.S. sanctions were unrelated to the Iran nuclear deal.

What is ironic in all this debating about Iran is how North Korea is widely reviled, heavily sanctioned and appropriately feared by the rest of the world over its ballistic missile program, but in the case of Iran’s missile program, the European Union has struggled to stay mute and not offend the mullahs.

Why does North Korea’s missile program drive the world to the brink of striking back, but in the case of Iran, many American partners refuse to criticize Iran?

Part of the answer lies in the Iranian regime’s aggressive efforts to open its markets to European firms to make investment and economic hamstring themselves from taking future action against Iran. Another explanation comes from EU policy makers who naively believe in the lies of the Iran lobby and hope for the best while ignoring the evidence of Iranian regime’s extremism.

Europe’s reaction is eerily similar to the reaction their predecessors had to the rise of Adolf Hitler’s Nazi Germany in the 1930s.

We can only hope the world doesn’t pay again for that same policy of appeasement.