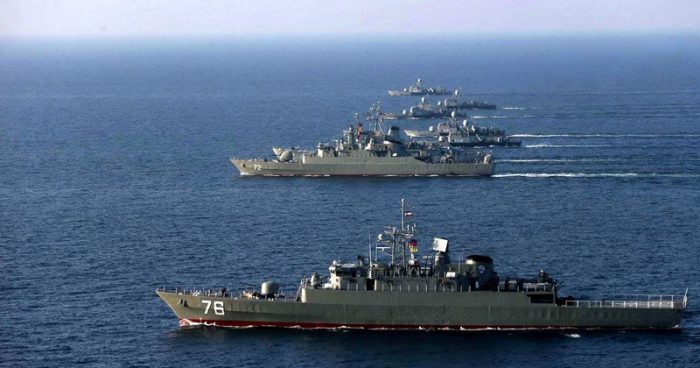 Iran Ups Ante with Warships Near the US

Back in the height of the Cold War, the saying “the Russians are coming!” often filled the political dialogue of the day with the kind of anxiety that came naturally at a time when everyone worried about building fallout shelters and conducting duck and cover drills at school as the old Soviet Union placed nuclear missiles 90 miles offshore in Cuba.

The Cuban missile crisis precipitated the closest episode to an all-out nuclear war the world had ever seen and hoped would never see again, but now the specter of confrontation along the U.S. coastline is again raising its ugly head as the Iranian regime announced plans this week to send a naval flotilla to the Gulf of Mexico in a show of power designed to thumb the mullahs’ collective noses at America and its allies.

Following orders from Iran’s top mullah, Ali Khamenei, the newly installed commander of its navy, Rear Adm. Hossein Khanzadi, announced a fleet of Iranian warships would soon be making their way into the Atlantic Ocean, despite what Iran claims is opposition by U.S. officials.

As Iran continues to deploy military assets to Syria, Yemen, Lebanon, and other Middle Eastern hotspots, its navy is placing a renewed focus on displaying force in international waters, according to the military leaders.

The latest military displays follow a series of provocative moves by Tehran aimed at rattling U.S. officials in the Trump administration, which has increasingly sought to confront Iran’s regional intransigence. Any Iranian presence in the Atlantic Ocean is certain to put U.S. military leaders in edge, according to the Washington Free Beacon.

The naval maneuver is designed to bolster Iranian influence with Latin American nations hostile to the U.S.; namely Venezuela and Bolivia.

More importantly, the exercise is designed to provide a propaganda boost at a time when the mullahs are clearly beleaguered back home; wracked with the devastation caused by massive earthquakes along the Iran-Iraq border and a moribund economy that continues to drag along in stark contrast to the promises made by Hassan Rouhani in the wake of the nuclear agreement which lifted economic sanctions.

Iranian efforts to sail its warships into the Atlantic Ocean coincide with a call by Khamenei to boost the regime’s military presence in international waters.

“The navy is in the frontline of defending the country with important regions, such as Makran, the Sea of Oman, and the international waters, in front of it,” Khamenei said in Tuesday remarks celebrating Iran’s Navy Day.

“Presence in free waters should continue similar to the past,” Khamenei added ahead of a meeting with Iranian military leaders.

“The navy is more advanced and capable compared with 20 years ago, but this level of advance is not convincing; and a high-speed move should be pursued with determination, high morale, lots of efforts, innovation, and action,” he was quoted as saying.

The Iranian regime has often resorted to military displays as a means of diverting attention from disasters or setbacks at home; relying on jingoism to cover up inadequacies in the regime’s handling of the economy and widespread dissent at home.

The massive influx of cash the regime received as a result of the nuclear deal has helped solidify and steady its military at a time when intervention in the Syrian civil war nearly bankrupted the Iranian economy.

The diversion of fresh capital from the needs of the Iranian people and boosting the economy towards the regime’s ballistic missile program and its military adventures abroad—including this jaunt to the other side of the globe—no doubt bolsters the mullahs, but does little to improve the lives of ordinary Iranians.

But then again, the regime has announced the voyage which is a far cry from actually pulling it off with its limited resources. The Iranian navy has famously never been a blue-water navy, content to ply the shallow Persian Gulf and hug the coastlines around the Arabian Sea and Indian Ocean and play games of cat and mouse with U.S. Navy warships.

Back in 2014, the last Iranian navy commander, Rear Adm. Habibollah Sayyari, said that Iran planned to send ships near the U.S. to counter the American presence in the Persian Gulf.

Sayyari later said the sailings had been canceled “due to a change in schedule.” No other effort to send Iranian warships on such a voyage have ever been mounted until now.

Of course, that is not to say the regime cannot accomplish the task, but it does point out doubts as to the credibility of anything the mullahs announce.

What is clear though is that the regime is desperately casting about for anything to take attention away from its growing domestic problems at home.

The Iran lobby, led by the National Iranian American Council, has been busy focused on domestic U.S. policy such as the fight over immigration policies and even focusing on the shooting death of a local Iranian-American in a traffic stop; anything to avoid talking about what is happening in Iran today.

It is ironic, that during the negotiations for the nuclear deal, NIAC leaders such as Trita Parsi talked almost non-stop about conditions in Iran as a result of international sanctions, but since then have been largely silent—even as conditions worsen.

The disparity between reality and fiction under the Iranian regime and its allies is as wide as the Atlantic Ocean.