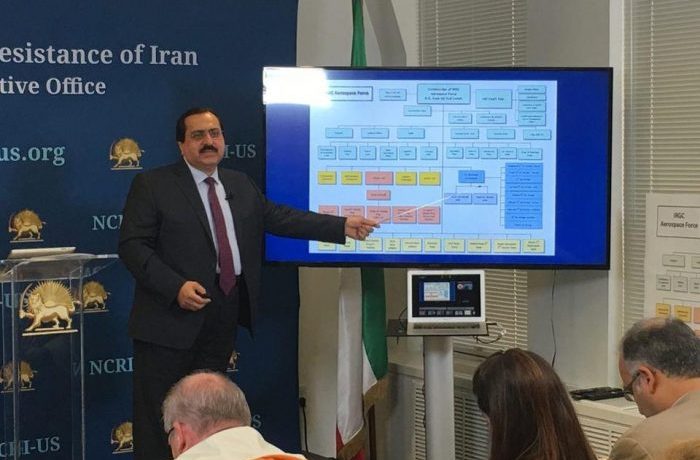 Iranian regime ballistic missiles have moved to the forefront of discussions and military action around the world as events shifted rapidly putting a spotlight on the mullahs’ use of the weapons for the first time on the battlefield.

All of the debate and editorials produced by the Iran lobby has always consistently tried defusing Iran’s escalating supply of longer range ballistic missiles as nothing more than a defensive armament, but the recent launching of these missiles at targets in Syria moved them from the theoretical to the practical.

There can be no argument now that Iran possesses and has shown the willingness to use weapons that can prove just as destabilizing to the region as nuclear weapons. In fact, the mullahs’ willingness to continue investing heavily in the development of longer-range missiles with heavier lift capabilities and more sophisticated targeting systems makes Iran the pre-eminent threat in the Middle East.

The fact that the Iranian regime fought hard to exclude ballistic missile development from the nuclear talks two years ago demonstrates the value the mullahs and the Revolutionary Guard Corps places on these weapon systems.

In a practical sense, ballistic missiles provide a longer reach for the IRGC to attack targets far from Iran’s borders and gives the mullahs the political leverage to blackmail neighboring Gulf states for example into compliant behavior.

Previous sanctions on Iran’s ballistic missile program from the United Nations Security Council have been largely ignored by the mullahs and the sheer size and scope of its program has been largely unknown to the rest of the world.

But Iranian opposition groups did hold a press conference the other day in Washington, DC to disclose additional missile sites previously unknown to the rest of the world.

The National Council of Resistance of Iran (NCRI), an umbrella group for Iranian opposition groups, citing sources of coalition member the People’s Mojahedin Organization of Iran (PMOI/MEK) network inside Iran, in this case in Iran’s Defense Ministry & the Islamic Revolutionary Guards Corps (IRGC), has a history of blowing the whistle on Tehran’s ballistic missile program, nuclear weapons drive, terrorism and meddling across the Middle East and beyond, and human rights violations, according to Heshmat Alavi in Forbes.

Various aspects of the dozen hitherto-unknown sites involved in ballistic missile production, testing and launches, all controlled by the IRGC, were also unveiled.

NCRI U.S. Office Deputy Director Alireza Jafarzadeh presented satellite imagery on the sites and details of North Korean experts who took part in the construction of such highly essential centers.

The scope of Iran’s IRGC-pursued missile program is far more extensive than previously perceived. In this press conference the NCRI identified the locations of 42 IRGC sites, of which 15 are involved in missile manufacturing and containing several factories linked to a missile industry group.

Four of Iran’s most important missile sites are located in the cities of Semnan (east of Tehran), Lar (southcentral Iran), Khorramabad (western Iran) and near Karaj (west of Tehran), according to the PMOI/MEK sources. Iran has only acknowledged the existence of two of these sites to this day, Alavi said.

The Semnan site has been actively associated to SPND, Iran’s organization in charge of building a nuclear weapon, PMOI/MEK sources revealed. SPND has carried out many of its tests at this site.

SPND is the Persian acronym for the Organization of Defensive Innovation and Research, including Iran’s nuclear weapons program engineering unit. The NCRI first unveiled the existence of SPND in July 2011, leading to its sanctioning three years later.

IRGC missile sites have all been constructed based on North Korean blueprints, according to PMOI/MEK sources, adding Pyongyang’s experts have also been present at sites assisting their Iranian counterparts.

The existence of the Iranian missile program and North Korean cooperation is not news, but the ramp up in size of the missile fleet and Iran’s willingness to use it now are deeply disturbing to policymakers from Washington to Riyadh.

U.S. senators who passed tough new legislation imposing sanctions for Iran’s missile program stated flatly that the Iranian regime now poses the greatest security threat to the U.S. as U.S. warplanes shot down yet another Iranian drone over Syria.

“The Iranians never like sanctions, but if they don’t like them, then they should stop testing ballistic missiles in violation of U.N. resolutions,” said Connecticut senator Chris Murphy.

The discussion over Iranian missiles didn’t stop the regime’s ardent supporters from weighing in and coming to the mullahs’ defense, as well as opponents in verbal fireworks rivaling what is happening on the battlefield.

Dennis Ross, a former U.S. Mideast negotiator and author, laid out the unpleasant choices left on the table as Iran steps up its military involvement in Syria, Iraq and now the Gulf region.

“Amid this confusion, Iran is pressing ahead to strengthen its grip on Syria, even as Trump goes after ISIS. Iran’s intervention to save President Bashar al-Assad’s regime has involved sending not just elite Iranian military advisers but also bringing in Lebanese Hezbollah and other Shia militias from as far away as Afghanistan. While estimates vary on the size of these forces, the numbers are in the tens of thousands. Iran’s sectarian shock troops are being used to extend the regime’s writ, especially as the Syrian regime’s deployable military manpower has shrunk to about 20,000 forces,” he writes in Politico.

“Iran is actively trying to create a land corridor through Iraq and Syria to Lebanon. To that end, Iran is pushing from within Iraq and Syria, using its Shia militia proxies on both sides of the border. On the Iraqi side, the Shia militias have now largely cleared ISIS from border crossings. Within Syria, Iran has sent significant Hezbollah forces eastward to Deir ez-Zour, a major Syrian city along the Euphrates River. With the U.S.-supported effort to liberate Raqqa under way, Iran wants to prevent any U.S.-backed groups from establishing themselves in eastern Syria—something that could preclude the Iranian aim of controlling Syria’s borders with Iraq and Jordan. (With Hezbollah also now active in the area of Deraa, a southern Syrian city close to the Golan Heights, the Iranians have their eye on the Syrian-Israeli border as well,)” Ross adds.

The implications are clear. The price of not confronting Iranian aggression will soon become very expensive, which is what the mullahs are hoping for; a victory without cost is their mantra.

The world should make the mullahs have to pay a very heavy price.