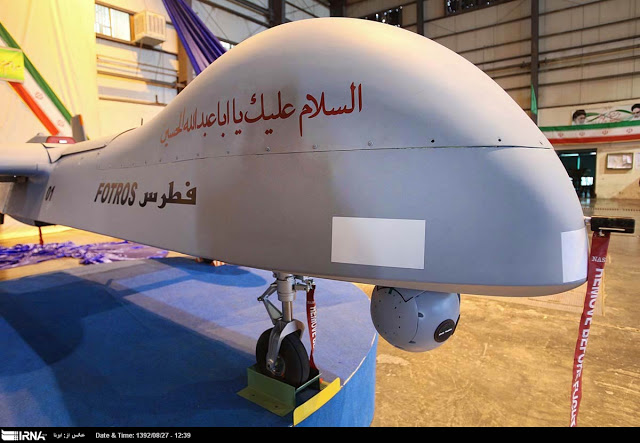 Iranian Drones and Missiles Increase Tensions and Risk of US Conflict

The Iranian regime continues to invent innovative ways to destabilize the Middle East. First it relied on supporting terrorist groups such as Hezbollah and proxies such as Shiite militias in Iraq and Houthi rebels in Yemen.

Then it turned to technology to build a nuclear program in secret, then construct ballistic missiles using North Korean designs initially, but then adapted updated designs to increase their range, payload capacity and targeting.

Now the Iranian regime has turned to drones to widen the scope of its military and strike capabilities. In Syria, U.S. forces have already shot down Iranian drones being used in attacks against U.S.-backed forces.

In Pakistan, the Pakistan Air Force shot down an Iranian spy drone in its airspace. The incident is first of its kind in the history of two Islamic countries, which share a porous border.

The drone’s downing was reported amid an emergency flag meeting between Pakistani and Iranian officials following the unprovoked firing of several mortar shells into Pakistani territory over the weekend.

On Sunday, Iranian border forces fired several shells near Prom, an area of Panjgur. No casualty was reported though. On May 27, a mortar shell fired from Iranian side in Panjgur district had killed one person. On May 21, at least five mortar shells were fired into Taftan from across the border.

Pakistan has accused Iranians of violating its territorial integrity and lodged protests several times in the last few years.

The increase in incidents ranging from Pakistan to Syria to the Persian Gulf to Yemen paints a disturbing picture of Iranian regime’s aggression on a wide front and threatens to trigger conflicts with and between the U.S., Russia, Saudi Arabia, Turkey, Pakistan and Iraq.

That heightened struggle was highlighted in a piece in USA Today as the Trump administration showed a willingness to confront Iranian regime’s aggression rather than the policies of appeasement by the previous Obama administration.

“The underlying problem is Iranian expansionism,” said James Jeffrey, a former U.S. ambassador to Iraq with extensive experience in the region. The Iranians are worried about who will fill the power vacuum after the defeat of the Islamic State, which is steadily losing territory, he said.

Jeffrey said the Trump administration is now grappling with developing a new strategy that takes into account efforts to blunt Iran’s actions to expand its influence at the same time the U.S. military is focused on defeating the Islamic State, also known as ISIS.

“They believe Iran must be contained, but what they haven’t worked out is the implications of that,” Jeffrey said.

Iranian-backed forces likely will continue to challenge the Syrian Democratic Forces (SDF), an alliance of about 50,000 local troops that the U.S.-led coalition has trained and equipped to combat ISIS.

The Iranians want to hold “an arc of influence” that runs from Iran through Iraq and Syria into Lebanon, said Jack Keane, a retired four-star Army general. “If that ground ends up held by U.S.-backed forces, that interferes with their strategic plans.”

In recent weeks, the United States shot down two Iranian-built armed drones and a Syrian aircraft over Syria. U.S. aircraft have also attacked ground forces around a coalition outpost in southeastern Syria.

Analysts say Iranian mullahs are directly challenging U.S. forces because controlling territory between Iran and Lebanon is critical to their strategic objectives.

That prize of controlling Syrian territory liberated from ISIS is also driving Iranian regime supporters to attack U.S. policy in order to build political pressure on the Trump administration to cave in to Iranian moves.

An editorial in MarketWatch by Faysal Itani, a senior fellow with the Atlantic Council’s Rafik Hariri Center for the Middle East and Ali Marhoon, a policy intern there, warns of the potential for confusion as all of these elements converge and collide and Iran’s willingness to test U.S. resolve in Syria.

“The (Assad) regime itself seems too weak and preoccupied to threaten the U.S.-led coalition in al-Tanf. However, Iran is far more capable, with large reserves of (proxy) manpower and little tolerance for a U.S.-backed de facto statelet in its Syrian client’s territory. It is more likely that Iran, acting through its local proxies, would test the coalition’s resolve through increasing provocations. If so, it would calculate that the United States would back down to avoid serious escalation, thereby curtailing its territorial advances,” they write.

They warn that U.S. policy remains muddled other than eliminating ISIS, which leaves open the potential for the mullahs in Tehran to test the limits of U.S. policy and essentially see what they can get away with.

This testing can be seen in Iraq as forces move to retake Mosul from ISIS, but at the same time Iranian-backed Shiite militias have begun moving into liberated territory to stake their claim to the villages and towns under their banner instead of ISIS.

“It is not clear what the Baghdad government can do about this territorial grab for power in Ba’aj. It has not had the military or security reach to enforce its authority in this region of Nineveh province for many years, and has relied on the goodwill of local tribal forces. It was those forces that were persuaded to take part in former United States president George W. Bush’s famous ‘Awakening’ that defeated the insurgency during the American occupation, but it was also those forces that were eventually betrayed by the sectarian policies of the Nouri Al Maliki government, which led them to acquiesce in (if not actively support) the Daesh takeover in 2014,” writes Francis Matthew in GulfNews.

As Iranian regimes’ drones continue to fly and be shot down, the question inevitably arises as to whether or not the mullahs will back down.