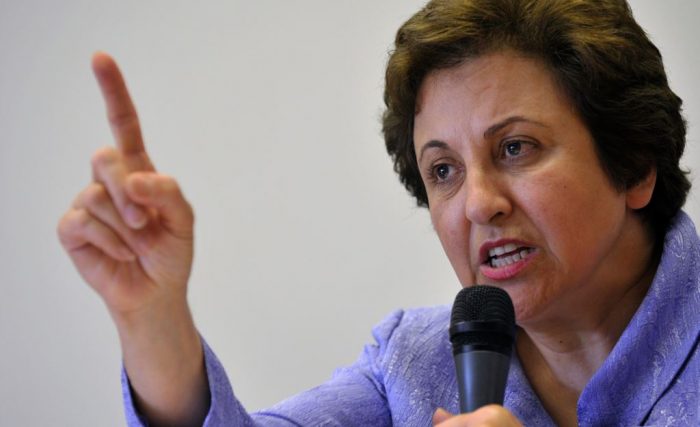 Shirin Ebadi is an Iranian lawyer, former judge in the Iranian regime and noted human rights activist who was awarded the Nobel Peace Prize in 2003, making her the first Iranian and first Muslim woman to win the award.

During her extensive and laudable career, Ebadi took care to never explicitly call for the kind of regime change many Iranian dissidents have long advocated. Instead, she retained hope that the Iranian government could be fixed from within by so-called reformers such as Hassan Rouhani, whom regime advocate groups like the National Iranian American Council (NIAC) have long sought to portray as a “moderate.”

However, her true positions came to light recently in an interview with Bloomberg in which she finally announced her belief that “reform is useless in Iran.”

Echoing the argument that Iranian dissidents have been making for more than two decades, Ebadi said that the means of ending Iranian tyranny should be a U.N.-monitored referendum on the constitution that proposes one basic change: eliminating the unelected office of supreme leader. The Iranian people, she said, “want to change our regime, by changing our constitution to a secular constitution based on the universal declaration of human rights,” according to Lake.

It’s a position similar to the one advocated by Mrs. Maryam Rajavi, president of the National Council of Resistance of Iran (NCRI), in a ten-point plan for the future of  Iran.

Rajavi’s plan now seems remarkably prescient in light of the recent wave of massive grassroots demonstrations that began last December. Those protests and Ebadi’s belated condemnation are a strong rebuke not only to Rouhani but also to the Western progressives who foolishly believed he was an agent of change.

While Ebadi first made her views on the referendum known in February, she used the interview with Bloomberg to get more specific about what Western governments, and particularly the Trump administration, can do to assist the Iranian people in their struggle.

That included warning against any U.S. military intervention and urging only Iranian support for regime change. It’s a position that again echoed what the NCRI called for over a decade ago and represents a vindication of the vision laid out by the Iranian resistance movement in urging Western support for the Iranian dissident movement.

Ebadi went on to clarify what this type of Western support might look like, by advocating regime-targeting sanctions that would weaken the government without hurting the people themselves. For example, Ebadi says the U.S. and European governments should sanction the Islamic Republic of Iran Broadcasting or IRIB. This conglomerate controls the media in Iran and also manages Iran’s foreign propaganda such as the English-language PressTV and the Arabic al-Alam. Ebadi stopped short, however, of endorsing the style of crippling sanctions that were disbanded by the Obama administration in mid-2015.

Ebadi also criticized NIAC, which played a key role in advocating for President Obama’s nuclear deal with Iran. Ebadi told Bloomberg, she regrets participating in an event with NIAC in 2011, saying “when I analyzed what they say and do, I realize what they say is closer to what the government says that what the people want.”

Predictably, NIAC rallied its defenders among the American left including Noam Chomsky, a professor at the Massachusetts Institute of Technology, who said in The “Iranian” (a site where lobbies and agents of Iranian regime write): “I don’t know on what basis Shirin Ebadi is confident that she knows better what Iranians want than NIAC, to take one of her examples,”

So what makes Chomsky, an American professor who speaks no Farsi and has never been to Iran, feel that he has more authority on the subject than an Iranian woman who has risked her life fighting for basic human rights in her country of birth?

It’s not clear, but coming from someone who has made a career echoing regime propaganda of America being a “terrorist state,” and has cast doubt on Assad’s well-documented use of chemical weapons, it is sadly unsurprising.