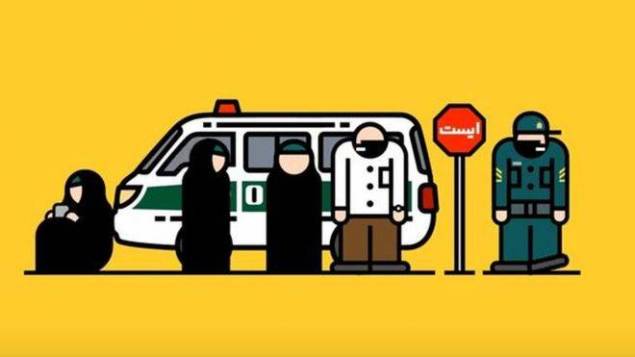 New App to get around the oppressive “Ershad” security units.

hile the Iran lobby is trying to push for the idea, of moderate forces existing inside the Iranian regime, the violation of human rights in Iran is on the rise. Things have gotten so bad, that some smart Iranian app developers have created a remarkable mobile phone app to help young fashion conscious Iranians avoid the regime’s notorious morality police known as “Ershad.”

According to the BBC, Ershad’s mobile checkpoints which usually consist of a van, a few bearded men and one or two women in black chadors, are deployed in towns across Iran and appear with no notice.

Ershad personnel have a very extensive list of powers ranging from issuing warnings and forcing those they accuse of violating the regime’s strict Islamic code of conduct, to make a written statement pledging to never do so again, to fines or even prosecuting offenders.

The new phone app which is called “Gershad” (probably meaning get around Ershad instead of facing them) however, will alert users to checkpoints and help them to avoid them by choosing a different route.

The data for the app is crowdsourced. It relies on users to point out the location of the Ershad vans on maps and when a sufficient number of users point out the same point, an alert will show up on the map for other users. When the number decreases, the alert will fade gradually from the map.

In a statement on their web page the app’s developers explain their motives in this way: “Why do we have to be humiliated for our most obvious right which is the right to wear what we want? Social media networks and websites are full of footage and photos of innocent women who have been beaten up and dragged on the ground by the Ershad patrol agents.”

“Police need to provide security for the citizens not to turn into a factor for fear. A while ago, angry with such unreasonable oppressions, we looked for a solution to find a practical way to resist the volume of injustices peacefully with low risk level, to restore part of our freedom.”

According to the designers of Gershad, in 2014 alone, around three million people were issued with official warnings, 18,000 were prosecuted and more than 200,000 were made to write formal pledges of repentance.

While it is laudable that Iranians are developing new and innovative ways to get around the strict control imposed by the mullahs, the price of that covert activity can be high in a regime where over 2,200 executions have already occurred under the tenure of Hassan Rouhani.

That point was emphasized by Mohammad Rez Naqdi, commander of the regime’s infamous Basij paramilitary force, who claimed that the U.S. could no longer act in the Middle East without the consent of top mullah Ali Khamenei.

Those kinds of boasts have caused an ever-increasing number of news outlets and political leaders from both sides of the aisle to demand more accountability from the regime.

According to the Washington Post, this week alone, U.S. lawmakers will gather for at least five separate committee meetings specifically dedicated to reviewing Iran’s actions ranging from its compliance with the nuclear pact to its dedication to locating and freeing still-missing former FBI agent Robert Levinson, who disappeared in Iran in 2007. Top U.S. intelligence officials were grilled Tuesday in two additional hearings for their take on the threat posed by Iran.

And later this month, senators are expected to roll out a series of bills to bring the greater weight of more non-nuclear sanctions down on Tehran, seeking to punish Iran for everything from recent ballistic missile tests to pervasive human rights abuses.

Among the proposals was one offered by Sen. Chris Coons (D-Del.) who pledged to get more funding for the group responsible for making sure Iran doesn’t cheat on the nuclear deal, suggesting President Obama’s budget request doesn’t go far enough.

“As a member of the Appropriations Committee, I am committed to doing everything I can to increase funding for the [International Atomic Energy Agency] during the Appropriations process,” he said in a statement. “However, this goal is made considerably more difficult by the administration’s low baseline request.”

It is almost a given that Iran’s upcoming parliamentary elections are being engineered by the mullahs to deliver an overwhelming slate of winners favorable to Khamenei and his cadre of mullahs. It remains to be seen what the rest of the world will do in response to another stolen election in Iran.