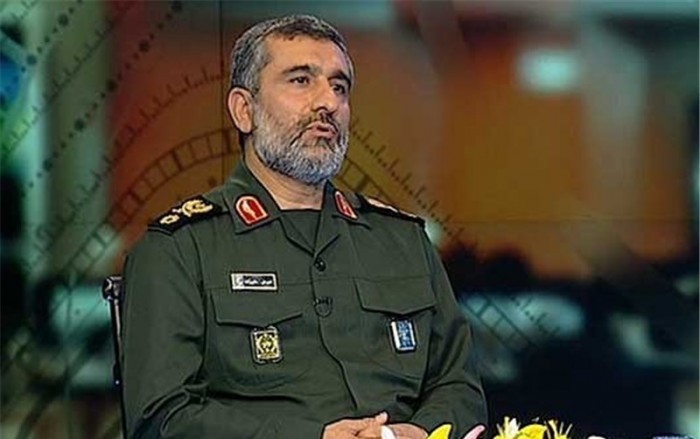 The Iranian regime announced its intent to continue pursuing development of its illegal ballistic missiles despite the U.S. blacklisting of more Iranian companies linked to the program, according to multiple news sources.

The U.S. Treasury Department blacklisted on Thursday two Iranian companies, cutting them off from international finance over their connection to the missile program. Washington had imposed similar sanctions on 11 businesses and individuals in January over a missile test carried out by the IRGC in October 2015.

“Even if they build a wall around Iran, our missile program will not stop,” Brigadier General Amir Ali Hajizadeh, commander of the IRGC’s aerospace arm, was quoted as saying by Tasnim news agency. “They are trying to frighten our officials with sanctions and invasion. This fear is our biggest threat.”

Hassan Rouhani, the regime president touted by the Iran lobby as a pragmatic conservative, said on Sunday that boosting Iran’s defense capabilities is a “strategic policy.”

“We will pursue any measure to boost our defense might and this is a strategic policy,” Rouhani was quoted as saying by Press TV in the first cabinet meeting in the new Persian year.

The fact that the regime fought hard to separate its ballistic missile program from the nuclear agreement reached last year created the kind of yawning loophole which now allows it to develop longer range missiles without fear of jeopardizing the flood of billions in cash now streaming into the regime as a result of the deal.

Hajizadeh downplayed the recent sanctions describing them as futile efforts to curb the regime’s missile program and he is correct in large measure because the deal struck by the Obama administration essentially only allows for pinprick sanctions in response to missile violations.

It also ignores the fact that the nuclear deal does not prevent the Iranian regime from using its new generation of missiles to use chemical or biological weapons payloads, increasing the lethality of what the mullahs can order up.

Another demonstration of the futility of patchwork sanctions was a visit to Iran by North Korean executives of the Korea Mining Development Trading Corp., which is under both UN Security Council and U.S. sanctions for exporting equipment related to ballistic missiles and other weapon systems.

The North Koreans met with the regime’s Shahid Hemat Industrial Group to sell valves, electronic components and measurement devices that are used in liquid-fueled ballistic missiles and space launch vehicles.

The continued commerce between North Korea and the Iranian regime shows how much things have not changed since the deal was signed and demonstrates the fundamental untruth pushed by regime allies such as the National Iranian American Council that the nuclear accord would dramatically alter Iran’s relationship with the world.

Nothing has changed and if anything the past few months have shown how much worse things have gotten with appalling terrorist attacks mounted by Islamic extremists in Paris, Brussels and San Bernardino and a refugee crisis that shows no sign of slowing down as Iran continues to send fighters to battlefields throughout the Middle East.

Ali Safavi, a member of the National Council of Resistance of Iran, a leading Iranian dissident group, wrote in the New York Daily News about the disconnect between the perception of reformers within the regime and the reality of their hardline practices.

“The leaders of this round’s so-called reformist faction include former President Ali Akbar Hashemi Rafsanjani and current President Hassan Rouhani. The former was famously embraced in the early 1990s by the West as a pragmatist willing to do business, before he we went on to preside over the worst period of the Iranian regime’s terrorist attacks and assassinations of dissidents and foreign nationals abroad,” he said.

Indeed, during his “moderate” presidency, Rafsanjani’s Iran was regarded by the U.S. State Department as the world’s number one state sponsor of terrorism, a dubious distinction maintained by the current president,” Safavi added. “When will Washington wake up and learn that perhaps the Iranian regime is fundamentally incapable of reform? When will it learn that it should invest in the Iranian people and the real opposition instead of the phony moderates?”

He poses the central problem with policymakers and elected officials dealing with the Iranian regime: failure to learn from past mistakes dooms us to keep repeating them.

Until the world stands firm against Iranian subterfuge, these types of sneaky acts will only continue.