In the case of the Iranian regime, repeated reports, investigations and reviews have documented and chronicled the catalog of abuses and horrors the mullahs visit on ordinary Iranian citizens every day.

Human rights groups such as Amnesty International and Iranian dissident groups such as the National Council of Resistance of Iran have long reported of arrests, imprisonment, torture and executions of many people whose only crimes have been to defend themselves against an abusive spouse, criticize the government or attempt to improve their economic condition.

Like so many other despotic governments such as North Korea, the Iranian regime has blithely ignored such criticism and continued on its barbaric ways. The litany of woe has almost become problematic to the extent the rest of the world has become numb to it; much as American news media have become numb to urban crime reporting.

Human rights and dissident groups have sought to shock the social consciousness of the world about Iran at times through the personal stories of those being tortured or executed – often at great personal risk to tell these stories – but even the most horrific tales are now consigned to obscure blogs or the back pages of newspapers.

Even when high profile prisoners such as the Washington Post’s Jason Rezaian or Christian pastor Saeed Abedini have been released and tell their stories or mistreatment and abuse, it often doesn’t go anywhere beyond the obligatory debriefing interview upon their release.

It does not result in governments changing their policies towards the regime and it does not advance efforts to improve the human rights situation in Iran. In fact, the example of the nuclear agreement reached last year is a glaring example of how low priority human rights seem to have become in that the Iranian regime specifically demanded and received a provision not to link human rights with the agreement.

Now the U.S. State Department has released its annual country survey of human rights practices for 2015 and Iran continues to be perpetrator of severe abuses. The listing of abuses is too numerous to recount here, but it is all too familiar. It reads in part:

“The most significant human rights problems were severe restrictions on civil liberties, including the freedoms of assembly, association, speech (including via the internet), religion, and press; limitations on citizens’ ability to choose the government peacefully through free and fair elections; and abuse of due process combined with escalating use of capital punishment for crimes that do not meet the threshold of most serious crime or are committed by juvenile offenders.”

“Other reported human rights problems included disregard for the physical integrity of persons, whom authorities arbitrarily and unlawfully detained, tortured, or killed; disappearances; cruel, inhuman, or degrading treatment or punishment, including judicially sanctioned amputation and flogging; politically motivated violence and repression; harsh and life-threatening conditions in detention and prison facilities, with instances of deaths in custody; arbitrary arrest and lengthy pretrial detention, sometimes incommunicado; continued impunity of the security forces; denial of fair public trial, sometimes resulting in executions without due process; the lack of an independent judiciary; political prisoners and detainees; ineffective implementation of civil judicial procedures and remedies; arbitrary interference with privacy, family, home, and correspondence; harassment and arrest of journalists; censorship and media content restrictions; severe restrictions on academic freedom; restrictions on freedom of movement; official corruption and lack of government transparency; constraints on investigations by international and nongovernmental organizations (NGOs) into alleged violations of human rights; legal and societal discrimination and violence against women, ethnic and religious minorities, and lesbian, gay, bisexual, transgender, and intersex (LGBTI) persons based on perceived sexual orientation and gender identity; incitement to anti-Semitism; trafficking in persons; and severe restrictions on the exercise of labor rights.”

And all that is just in the summary page with much more detailed in the report. Yet even with the acknowledgement of all of Iran’s violations, there is not enough movement to rectify these terrible problems, nor hold the regime accountable for them.

A Reuters story highlighted one case to illustrate the appalling act of executing juveniles. In the southern province of Fars, Fatemeh Salbehi suffocated her husband after drugging him, a capital crime in the Islamic Republic.

What made the case controversial is that Salbehi was only 17, a minor by international legal standards, when she allegedly committed the crime. Her alleged confession also came during a series of interrogations where there was no lawyer present.

The case was retried but Salbehi was hanged in the Adel Abad prison in Shiraz last October.

The issue has come under scrutiny because of a scathing U.N. report on human rights in Iran last month which highlighted what it called the “alarmingly high” rate of executions in the country, including juveniles.

That report, along with an Amnesty International report in January, spurred commentary from ordinary Iranians on social media at least some of which criticized the administration of Hassan Rouhani for not doing more to stop the juvenile executions.

Iran has the highest rate of juvenile executions in the world, despite being a signatory to the Convention on the Rights of the Child, an international human rights treaty that forbids capital punishment for anyone under 18.

“The fact that there were two executions in less than two weeks just shows how indifferent and contemptuous the Iranian authorities are of their obligations,” said Raha Bahreini, the Iran researcher for Amnesty International.

In the past decade, Iran has executed at least 73 juvenile offenders, according to the January Amnesty report.

Clearly the regime has little regard for international agreements when it does not suit its needs and until the world unites in holding Iran accountable, human rights abuses or development of new ballistic missiles or 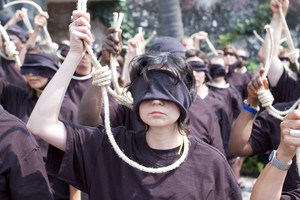 Iranian Regime Executions of Juveniles Does Not Stop

deepening of the Syrian war will only continue unabated.