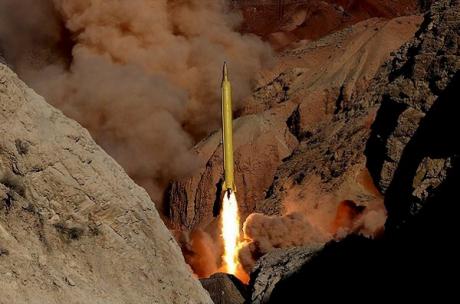 A ballistic missile is launched and tested in an undisclosed location, Iran, in this handout photo released by Farsnews on March 9, 2016. REUTERS/farsnews.com/Handout via Reuters

You have to wonder just how much of North Korea is rubbing off on the mullahs in Tehran as the Iranian regime launched ballistic missiles for the second straight day in violation of United Nations Security Council resolutions and boldly thumbed their collective noses at the U.S. as Vice President Joseph R. Biden Jr. was touring Israel.

The Revolutionary Guards Corps, which oversees the Islamic state’s missile program, fired two missiles that it said hit targets over 850 miles away and pointedly declared that Israel was now within striking distance.

If they didn’t get their point across, the IRGC said the missiles bore inscriptions written in Hebrew on the side saying “Israel must be wiped off the face of the earth,” as reported by Fars, a regime news agency which also released video of the launches.

The head of the Revolutionary Guards’ missile program, Brig. Gen. Amir Ali Hajizadeh, said the rockets had a range of about 1,200 miles and were capable of hitting the “Zionist regime,” Iran’s name for its archenemy Israel, the semiofficial news agency Mehr reported.

As expected, the Iran lobby did not utter one tweet, statement or editorial condemning the provocative launches, nor the timing which seemed designed to send a pointed message to the U.S. The repeated launches does bring to mind the tactics used by North Korea in also aggressively firing missiles and rockets regardless of any international sanctions that exist. The fact that the two radical nations – which already share missile and nuclear technology – are now sharing the same political playbook should come as no surprise.

The lack of inclusion of the regime’s missile program in the nuclear agreement reached last year shows the glaring loopholes that exist for Iran to continue the development of destabilizing weapons systems that can deliver chemical, biological or conventional warheads – let alone nuclear ones developed in secret – anywhere in the Middle East and most of Europe, Asia and Africa.

The lack of response from the Obama administration was predictable and disheartening for those who have consistently warned of the threat the regime poses; even after a rigged parliamentary election was touted as producing a “moderate” shift in Iran’s domestic politics.

Laudably, Democratic presidential candidate Hillary Clinton entered the fray by calling for more sanctions against the Iranian regime in light of this most recent violation.

Clinton said on Wednesday she was “deeply concerned” by reports that Iran had tested multiple ballistic missiles and said the country should face sanctions for its actions.

“This demonstrates once again why we need to address Iran’s destabilizing activities across the region, while vigorously enforcing the nuclear deal,” Clinton said in a statement.

“Iran should face sanctions for these activities and the international community must demonstrate that Iran’s threats toward Israel will not be tolerated,” she said.

Her backing of sanctions comes as Democrats and Republicans on Capitol Hill joined together in a push to develop new sanctions against Iran in light of these new and repeated transgressions.

Senate Foreign Relations Committee Chair Bob Corker (R-Tenn.) and ranking member Ben Cardin (D-Md.) are preparing legislation to slap additional sanctions on Iran in response to a recent spate of ballistic missile launches. While the tests do not themselves violate the Iranian nuclear deal that took effect in January, officials believe they fly in the face of other international prohibitions and weaken the spirit of compliance needed to sustain the nuclear pact.

The senators are also negotiating a way to extend the current regime of sanctions under the Iran Sanctions Act past the end of the year, and possibly increase sanctions against Tehran for other conventional weapons and terrorist activities as well.

If the Senate can produce a package of sanctions, it stands a good chance of getting an audience in the House, where Speaker Paul Ryan (R-Wisc.) said Tuesday that Congress would “continue to press for new sanctions against Tehran” in light of the most recent ballistic missile tests.

“There are a number of things that lead me to personally believe that, you know, their behavior is not — they haven’t changed any course yet,” said Army Gen. Lloyd Austin, commander of U.S. Central Command, at a Senate hearing.

Austin said he was concerned about Iran’s continued testing of ballistic missiles, which the U.S. intelligence community believes is Iran’s preferred method for delivering a nuclear weapon.

“What I would say is that what we and the people in the region are concerned about is that they already have overmatch with the numbers of ballistic missiles,” Austin told the Senate Armed Services Committee.

“The people in the region, they remained concerned about [Iran’s] cyber capabilities, their ability to mine the straits,” he added. “And certainly the activity of their Quds forces … we see malign activity, not only throughout the region, but around the globe as well.”

“What I worry about is [if] that relationship between Syria, Russia and Iran develops further, that it will present a problem for the region,” he said.

That cooperation is expanding to include the sale of high-end weapons, Austin said.

“We’ve seen recently [the sale of] high-end air defense capability from Russia to Iran and that’s a problem for everyone in the region,” Austin said.

“And also coastal defense cruise missiles. As that type of technology is — migrates from Russia to Iran, it’ll eventually wind up in the hands of Lebanese Hezbollah.”

All in all, it hasn’t been a very good weak for the Iran lobby proponents of a new moderate Iran and puts to a lie what they have been advocating for so long.