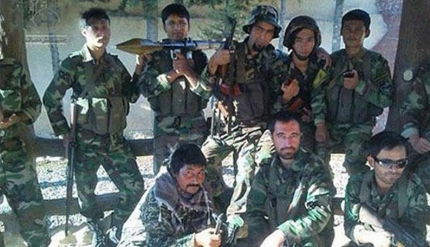 The Iranian regime’s involvement in the Syrian civil war has been well documented, including the regime’s history of supplying badly needed cash, weapons and fighters to prop up the Assad regime as it teetered on the brink of collapse.

Even though Iranian officials have long denied it, evidence is mounting of the regime’s deepening involvement in what may prove to be the Achilles heel of the mullahs in Tehran as they draw a red line in the sand to keep Bashar al-Assad in power even if it means suffering significant losses.

Already the regime has had several commanders of its Quds Forces and Revolutionary Guard Corps killed while leading troops in Syria and now news comes of even more casualties for the regime.

Thirteen military advisers with the Iranian Revolutionary Guards have been killed in Syria in recent days and 21 others wounded, Iranian media reported on Saturday.

It was the regime’s biggest loss of forces within such a short time, based on official figures. The names of those killed and when their remains will be repatriated will be announced later, the Guards said.

Among the killed included 15 Afghan mercenaries the Iranian regime had recruited from the ranks of Afghan refugees living in Iran said the British-based Syrian Observatory for Human Rights. Critics of the regime have claimed that many Afghans were coerced to fight for the Assad regime under threat their families would be deported back to Afghanistan.

Estimates of the number of recruited Afghan fighters in Syria from Iran range from between 10,000 to 12,000, largely drawn from the illegal immigrant population in Iran where their options are limited for employment and their hopes of remaining often hang on the whims of the mullahs in Tehran who often regard the Afghans as cannon fodder.

Reports also added that Iran has promised citizenship to these fighters and improving the living conditions of their families in addition to these fighters being paid from $400 to $600 in monthly wages to fight in Syria.

The monitor also said at least six of the dead came from Lebanon’s Hezbollah Shi’ite movement, an Iranian proxy which has supplied the bulk of fighters to Syria and has been led by Iranian regime officers on the battlefield.

The Iranian dead were from Iran’s northern province of Mazandaran, Hossein Ali Rezayi, a Guards spokesman in the region, told the ISNA and Fars news agencies.

The deaths and injuries occurred in Khan Tuman village some six miles southwest of the battleground city of Aleppo, the official IRNA news agency reported a Guards statement as saying.

Dozens of Iranian “advisers” have been killed in Syria since late 2015, including Revolutionary Guard commanders.

“Since the Syrian nation chose Bashar al-Assad as president two years ago, he will remain in the post until the Syrian people change him,” Velayati said in an interview with the Lebanese al-Mayadeen television channel.

Velayati rejected the idea of imposing a president on Syria who would serve the interests of Saudi Arabia or any other party.

While Tehran previously said its support was limited to advisers, it has been more open about the extent of its role since Russia intervened on Assad’s side last year.

Iran has been particularly involved in campaigns around Aleppo in northwest Syria, which was the country’s commercial and industrial center before the war and is now divided between government and rebel forces.

With the Iranian regime’s intervention, the war in Syria has only escalated resulting in more than 250,000 people killed, with tens of thousands unaccounted for, some say the death toll may be as high as 400,000, as well as the displacement of nearly half of the country’s entire population.

Syria is a classic example of the impotence of the arguments made by Iran lobby groups such as the National Iranian American Council which claimed that passage of the nuclear agreement with Iran would force moderation within the government and move it to be a more willing ally in seeking peaceful political change in Syria.

Instead Iran has dramatically escalated the violence in Syria and widened the war with the recruitment of Russia into the conflict, proving once again that arguments made by NIAC have proven meaningless.

Struan Stevenson, a former Conservative Euro MP representing Scotland and currently President of the European Iraqi Freedom Association (EIFA), summed up Iran’s responsibility for Syrian bloodshed in an editorial in The Hill:

“The Iranian regime has reached a deadly impasse in Syria with mounting casualties and little sign of progress. The original objective of defeating the Free Syrian Army and occupying its strongholds like Aleppo, with the help of Russian air strikes, has failed. Russia has begun to pull out and Khamenei is panicking. Recently, the commander of the Qods Force – General Qasem Soleimani, was sent to Moscow to plead with Putin for more Russian intervention,” Stevenson writes.

“Western appeasement of the clerical fascist regime in Iran has contributed directly to the Syrian nightmare and to the creation of ISIS. The Iranian regime’s outright support for Bashar al-Assad and his bloody reprisals against innocent civilians paved the way for the rise of ISIS. Iran’s puppet regime in neighboring Iraq, under the genocidal control of former Prime Minister Nouri al-Maliki, opened the door for ISIS to seize great swathes of Iraqi territory. As a result, Europe now faces its biggest refugee crisis since the Second World War, as the civil conflict in Syria spirals out of control,” he adds.

Stevenson is right that the only true pathway for peace in Syria lies with Assad’s ouster and the expulsion of Iranian influence. Only then can the people of Syria make their own futures.