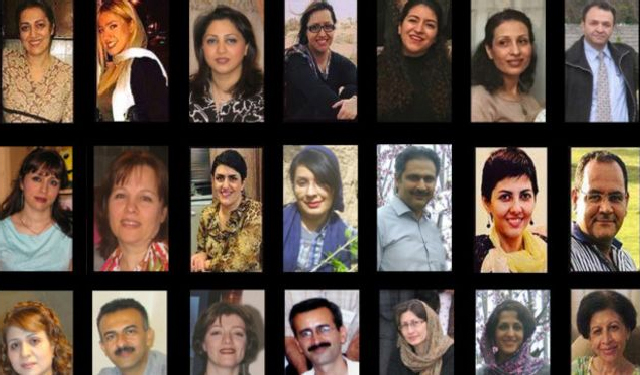 While Christians celebrated Easter this weekend with prayers and hopes for peace, love and redemption, the Iranian regime stood alone in its wide ranging efforts to crackdown on human rights, stir up confrontation and foment strife around the world.

In spite of promises made by regime officials such as Hassan Rouhani and loyal supporters such as the National Iranian American Council that Iran was a model of moderation and accommodation for religious and ethnic minorities, the opposite has been the case as the regime showed little tolerance for anyone outside of its own narrow ideology that fuels an extremist fervor.

The London-based Pars Theological Center is training at least 200 Iranian Christians to become the next generation of Iran’s church leaders, the Christian Post reported.

The persecution of Christians has persisted in Iran since the 1979 rise of the country’s theocratic government — with Christians facing the threat of death, lashing and torture. About 100 Christians currently remain imprisoned under Rouhani’s rule.

Sources describe Iranian house churches as consisting only of about four to five members — due to the threat of detection — and that they are forced to their place of gathering every time they meet.

“If they want to sing, they have to sing very quietly or not sing at all,” the source told the Post.

Regime punishment and torture of religious minorities has included brutal treatment of Sunni Muslims and those who follow the Baha’i faith, in which details of torture inflicted upon twelve Baha’is by interrogators three years ago at Amir Abad prison and detention centers in Iran’s Golestan Province—and the Iranian Judiciary’s complete lack of any response to the formal letter of complaint that was sent in 2012 by the victims of that torture to the head of the Judiciary of Golestan Province, were recently revealed in the media.

Twelve Baha’i citizens described harrowing instances of torture by their interrogators at the Amir Abad Prison, in the city of Gorgan, and other unnamed detention centers in Golestan province, northeast of Tehran.

“On the first day of his interrogation, Mr. Behnam Hassani’s wrist was tied very tightly with a rope and attached to a metal ring. The ring was raised to a nail above his head such that only his toes could touch the ground. He was in so much pain that he started to scream and shout,” said the letter.

“Then they brought him down and dragged him into a room and beat him. They pressed a pen between his fingers and hit him behind the head and on his mouth… Then they kept him under the rain for several hours on a cold night,” continued the letter.

These twelve Baha’is were among the 24 Baha’is (the other 12 were arrested in February and March 2013, also in Golestan Province), who recently received long prison sentences in January 2016.

Meanwhile, Ellie Silverman reporting for McClatchy News Service, detailed some of the brutal treatment regime prisoners received and how many were threatened before being released not to reveal any details of their mistreatment.

“A detailed picture of life inside Evin can be put together from interviews with former prisoners” Silverman writes. “Solitary confinement was one aspect they all had in common. All were blindfolded whenever they were taken from their cells, according to the Canadian, American and Iranian prisoners who spoke about their experiences,” Silverman continues.

“Another key aspect: Each prisoner was assigned to one principal interrogator who exercised authority over virtually every aspect of a prisoner’s life and served as that prisoner’s only contact with the outside world,” she added.

The former prisoners all recounted a difficult time adjusting to normal life after their release, including nightmares, flashbacks and other symptoms of post-traumatic stress. The prisoners released in January likely are enduring a similar adjustment period, said J. Wesley Boyd, associate professor of psychiatry at Harvard Medical School.

The scars and pain inflicted by the regime’s mistreatment of prisoners lingers long after their confinement ends and serves as a warning to others of what could happen to any other dissidents who dare oppose the mullahs.

The regime’s attacks and systemic marginalization of Sunni Muslims is also another example of how widespread the regime’s human rights crackdown is and how it is not limited to those outside of the Islamic faith.

According to Dr. Majid Rafizadeh, president of the International American Council writing in Huffington Post, Iran’s Sunni are the largest minority in the country. Some of the discrimination that the Sunnis have suffered, according the UN report, are that the Sunni communities in Iran “have long complained that Iranian authorities do not appoint or employ them in high ranking government positions such as cabinet-level ministers or governors. They have also raised concerns regarding reported restrictions on the construction of Sunni mosques in Shia-majority areas, including the capital Tehran, and the execution or imminent execution of Sunni activists the government alleges were involved in terrorist-related activities.”

The regime’s abuses are aimed at virtually anyone not subscribing to its own extremist view of Islam and serves to remind us that the claims made by the Iran lobby about the regime’s moderate intentions are simply a smokescreen to hide the brutality it metes out on a daily basis.