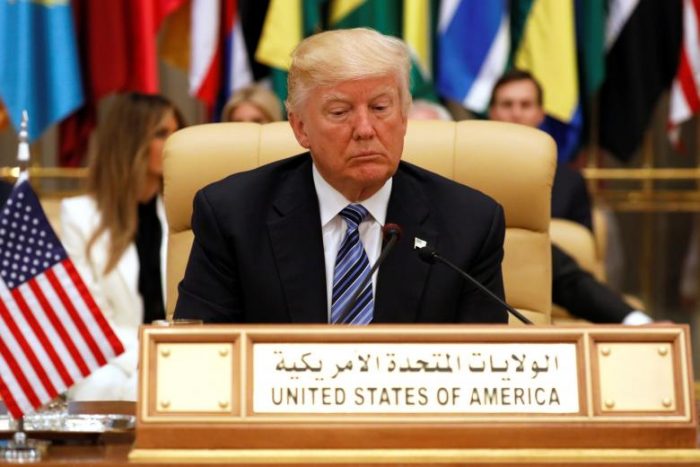 U.S. President Donald Trump takes his seat before his speech to the Arab Islamic American Summit in Riyadh, Saudi Arabia May 21, 2017. REUTERS/Jonathan Ernst

The Iranian regime election has given the world another dose of Hassan Rouhani, but in and of itself, his election to another term is meaningless since the world has seen that Ali Khamenei and his close circle of mullahs set policy, backed by the muscle of the Revolutionary Guard Corps.

The arguments against the Iranian government have never been directed at its people. For the most part, the Iranian people have been manipulated, coerced, bullied and even brutalized into submission. It has been the conduct of the leadership of the mullahs that have brought so much misery to that part of the world.

The leadership of Iran has pursued a policy that emphasizes harsh suppression of internal dissent, while using brute force to enact a foreign policy of war and terrorism to advance its aims, which is to expand the sphere of influence for its form of radicalized Shia theology.

But in an interesting twist of irony, Iran’s very actions to unite underneath its own banner have yielded the opposite effect: countries that have previously been adversaries are now aligning to form an international coalition to halt Iranian regime’s expansion.

President Trump’s first overseas trip started off with Saudi Arabia and extended into Israel, two countries that have not only been at odds and even war, but are also under their own scrutiny. Now both they and other countries, including the Gulf states, have begun the tenuous process of working together at keeping the Iranian regime contained.

The ancient proverb: “The enemy of my enemy is my friend” is finding utility now among countries that are being confronted by Iranian extremism and for President Trump, the opportunity exists to redefine a new order in the Middle East predicated at halting Iranian expansion and bring about a political realignment within the Iranian regime.

Trump’s visit to Saudi Arabia was the first to a Muslim majority nation for an incoming U.S. president and set the tone for reaching out to the Muslim world in a manner his predecessor never managed to achieve.

Trump said on Monday that shared concern about Iran was driving Israel and many Arab states closer and demanded that Tehran immediately cease military and financial backing of “terrorists and militias”.

In stressing threats from Iran, Trump echoed a theme laid out during weekend meetings in Saudi Arabia with Muslim leaders from around the world, many wary of the Islamic state’s growing regional influence and financial muscle.

Trump said there were opportunities for cooperation across the Middle East: “That includes advancing prosperity, defeating the evils of terrorism and facing the threat of an Iranian regime that is threatening the region and causing so much violence and suffering.”

Worried about the movement being made in realigning against the Iranian regime, newly minted Rouhani claimed that regional stability could not happen without Iran.

He said the summit in Saudi Arabia “had no political value, and will bear no results”.

“Who can say the region will experience total stability without Iran? Who fought against the terrorists? It was Iran, Syria, Hezbollah and Syria. But who funded the terrorists?”

In this one area, Rouhani is correct, but not for the reasons he claimed. Regional stability is dependent on Iran, but only if Iran stopped fueling the instability it has caused across the Middle East in Iraq, Syria and Yemen.

Rouhani also trotted out the time-worn claim that Saudi Arabia was in fact more dangerous because of the rise of Sunni-dominant terrorist groups such as ISIS, but ignored his own country’s role in helping spawn ISIS with the downfall of the Sunni-Shia coalition government of Nouri al-Maliki in Iraq.

While Rouhani tries to diminish the importance of Arab states aligning against Iran, the broader and more important strategic implications are more troubling for Rouhani and his fellow clerics. A clear alliance among fellow Muslim nations with non-Arab states such as Israel, the U.S. and Turkey would represent a sea change in relations among countries with long histories of opposing each other.

It also puts to a lie the message Rouhani and his Iran lobby supporters have long pushed which is that opposition to Iran has always been built around sectarian issues and as such lack legitimacy. The opposite is now true; a coalition of diverse nations with varying beliefs all share the same concerns over an Iran that stands at the center of virtually all the instability now wreaking havoc there.

The real proof of Iran’s intentions will not come from words but deeds. If the Iranian regime continues to fling ballistic missiles and supply its various proxies in their ongoing wars, then the regime has no intention of altering its course.

It is ironic that Rouhani pointed a finger at Saudi Arabia claiming it held no free elections when Iran’s own history of elections is more checkered, including the debacle of the 2009 disputed elections.

“Mr. Trump has come to the region at a time when 45 million Iranian people went to polling stations, and he went to a country where they don’t know what elections are about,” Rouhani said. “It’s not in their dictionary.

“Hopefully the day will come when Saudi Arabia will adopt this path.”

His triumphant comments neglected to mention that Iran’s elections are hardly free or fair, with candidates chosen by an unelected 12-man council, according to the Los Angeles Times, not to mention that the figure made up by the regime could not be verified, given no independent monitoring has been present, and Iran’s state media are full of facts on how both rivals have made unprecedented deceits in the ballots. The opposition to the Iranian regime has estimated the total number of participants in the fake election, to have been increased by four in order to cover, the regime’s isolation at home.

Rouhani for his part deflected questions about Trump’s calls to isolate Iran over its support for militant groups and its ballistic missile program, suggesting that the new U.S. administration had yet to “settle down” and formulate a coherent policy in the Middle East.

“We are waiting for this new U.S. government to be settled in terms of their stances, posture and future plans,” Rouhani said.

“Hopefully things will be settled down and well established in the U.S. so that we can actually pass judgments on the new administration.”

We can only assume Rouhani hopes to squeeze a few more months out of the appeasement policy pursued by the Obama administration before things go south on him and his fellow mullahs.