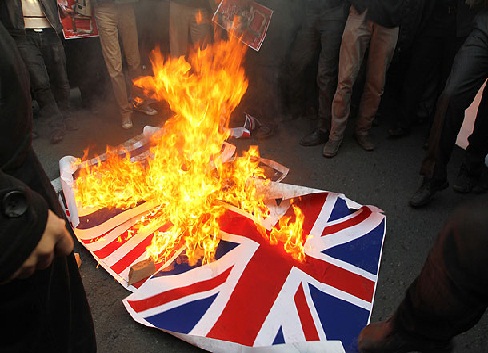 Iranian Regime Use Boogeyman of Great Satan to Control Elections

As parliamentary elections for the Iranian regime approaches, the regime continue their verbal drumbeat blaming the U.S., Great Britain and anyone else not named “Iran” for meddling in the elections. The latest verbal volley came from Hassan Firouzabadi, the chief of staff of the regime’s armed forces, who accused the U.S. and Great Britain of meddling by campaign for and against certain candidates.

“Such interference is [part of] aggressive strategies adopted by the US and Britain toward the Iranian nation, and the country’s officials should not underestimate it,” Firouzabadi said on Saturday.

He added that the “impudent” move by arrogant powers, including the U.S. and Britain, would provoke the wrath of the “revolutionary” Iranian nation.

Of course the good general neglected to mention any specific examples of meddling in his diatribe, but that is par for the course for the regime to hurl invective without any evidence, proof or backing. The truth is that there is no meddling going on or intrusive acts, especially from an Obama administration which seems intent on appeasing the mullahs in any way imaginable.

A compliant and friendly U.S. government though doesn’t fit the Islamic revolutionary beliefs held near and dear to the mullahs as their means of oppressing the Iranian people in what top mullah Ali Khamenei affectionately calls the “resistance economy;” an economy designed to keep Iranians struggling, impoverished and dependent on the regime for subsidized fuel, food and medicine.

It serves the regime’s purposes to keep blaming the U.S. and rest of the West for all the ills that have befallen Iran, especially during the time of economic sanctions, but since those have been lifted as part of the nuclear deal negotiated last summer, the mullahs are caught in the bind of having to explain to the Iranian people why things – like the economy – remain so bad under their stewardship.

For the mullahs, continued scapegoating of the U.S. is about the only excuse they have left to divert blame away from their own corruption, incompetence and mismanagement. It is also the strategy the Iran lobby follows in turning every issue into a blame game against the poor mullahs of Tehran.

All of which is a behavior that is only reinforced when the Obama administration fails to stand up aggressively to the regime’s misbehavior, thereby engendering even more egregious acts by the Iranian regime.

Case in point is the letter sent from Iranian general Mohsen Rezaei to Hassan Rouhani in which he detailed how to force even more concessions from the U.S. by aggressively building longer-range ballistic missiles.

The letter follows the capturing of U.S. sailors, the firing rockets near a U.S. carrier, and the flying of drones over U.S. and French carriers and it claims the U.S. only was willing to make a nuclear deal because Tehran aggressively pursued a renegade nuclear bomb program that violated UN sanctions.

“Just as Iran’s success in developing 20,000 centrifuges was a slap in the face of the United States and forced the Americans to come to the negotiating table and recognize our right to enrich uranium, I am hoping that with your support, the range of Iran’s missiles will exceed 5,000 kilometers [3,106 miles],” Rezaei wrote Rouhani.

The expanded reach of the missiles would threaten the U.S. and its allies by putting American military installations and Europe within range of an Iranian missile, which currently can only travel 2,000 kilometers.

If the regime were to develop a longer-range missile, no doubt using technology already developed and tested by North Korea, it would pose a significant threat to most of Europe and Asia. Not surprisingly, the Obama administration has been largely silent and the Iran lobby has been deaf and mute on these latest provocations.

North Korea is an interesting case study, since the efforts to rein in that rogue nation’s nuclear program through international monitoring – similar to the deal reached with the Iranian regime – has been an utter failure and has only allowed the North Koreans to assemble a small arsenal of nuclear warheads, but also develop intercontinental ballistic missile capability which it has been eager to sell to Iran for hard currency; of which the mullahs are swimming in $100 billion of it courtesy of the nuclear deal.

All of which is fueling a wild new arms race throughout the Middle East as the Iranian regime’s neighbors worry – and rightly so – about the mullahs intentions. Support of proxy wars in Syria, Yemen and Iraq has not bred much confidence in Iran’s neighbors, nor has an $8 billion shopping spree in Moscow for advanced weapons.

Escalating conflicts driving Middle Eastern nations to buy more weapons include conflicts in Libya, Yemen, Syria and Iraq, along with violence in Egypt and Turkey, says Ken Pollack, a senior fellow researching the Middle East at the Brookings Institution.

“We are seeing a region on fire,” Pollack says. “A lot of countries feel the need to increase their military capabilities to intervene in those conflicts or to fend off rivals.”

Pollack says the top rivalry in the region “consuming ammunition” is between Iran and Saudi Arabia and their allies, especially in Yemen where Tehran is backing the Houthi opposition to the Saudi-supported government. Iran is also supporting embattled Syrian President Bashar Assad while Saudi Arabia is sending weapons to groups opposing his government, but Pollack says the two nations appear to be vying for influence through other proxy wars in the region.

As long as the Iranian regime is allowed to continue the fantasy of blaming its ills on others such as the U.S., the longer the mullahs will feel safe in continuing on their path of destruction and oppression.