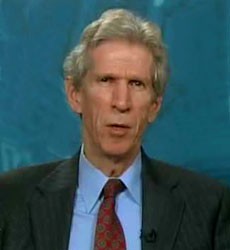 One of the more intriguing aspects of the arguments put forward by the Iranian regime lobbyists and PR flaks is the near constant drumbeat of the message that hopes for any possible deal with Iran on nuclear weapons lies with the U.S. and not Iran.

It is an argument advocated by Iranian regime loyalists such as Trita Parsi of the National Iranian American Council and Gareth Porter, a self-proclaimed historian and journalist, who most recently advanced the theory the U.S. negotiating position is unworkable and only foments the deep suspicions already inherent in Iran’s religious ruling class.

Consequently, he takes the position the U.S. must recognize the Iranian regime’s insistence on maintaining its enrichment capacity is not irrational and the sooner Washington recognizes it, the sooner a breakthrough will occur.

It’s a position that might elicit laughter if the stakes weren’t so high. Porter further posits that decades of aggressive U.S. policy towards Iran has forced Iran’s leadership to harden its approach to the U.S. in negotiations with the ultimate goal of the immediate lifting of economic sanctions.

Porter never mentions Iran’s broad and deep sponsorship and support of terrorist groups such as Hezbollah, Quds force, etc. and their past attacks killing U.S. personnel.

He never mentions the almost decade-long brutal crackdown on Iran’s own people which includes censorship and access to media and the internet, as well as mass arrests and halts to demonstrations, rigged national elections – twice – and a sharp increase in the number and frequency of public executions of men, women and religious and ethnic minorities.

Porter’s inability to exercise his historical insights to recount past acts by the Iranian regime as clouding American policy making is inexcusable and betrays his almost dogmatic approach to supporting whatever the Iranian regime position happens to be. One might daresay if the mullahs said the sky was green, Porter would concur.

Even more telling is his comment that criticism coming from rivals within mullah’s hierarchy that their Supreme Leader Ali Khamenei’s failure to support negotiations with the U.S. was wrong because it would mean Iran was negotiating with the U.S. from a woefully weak position. The fact Porter believes Iran’s negotiating position needs to be one of strength vis á vis the West says more about his allegiances than the need to eliminate nuclear weapons and prevent a new arms race in the Middle East.

If Porter was the historian he pretends to be, he would recognize the mistakes made in the run up of the first Cold War in which unbridled nuclear development placed the world at the brink of a nuclear apocalypse. At no point does Porter decry Iran’s march towards a nuclear weapon. In fact, he acknowledges Iran’s mullahs already possess the ability to build a nuclear weapon with the enriched fuel on hand. Instead he maintains the party line that sanctions must be lifted in order for any agreement to be reached.

While Porter argues “in the context of the history of the sanctions in US-Iran relations, Iran’s determination to hold out for a better deal is hardly irrational. If the Obama administration fails to understand that fact the diplomatic stalemate is likely to continue.”

He misses the exact opposite point of view that given the brutal nature of the Iranian regime and its involvement in literally all of the world’s hot spots involving extremist Islamist groups, one could hardly call the responses to Iran irrational.