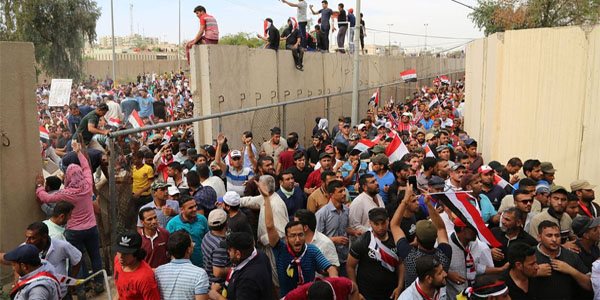 It has been well documented how the Iranian regime has gone all-in supporting the Assad regime in Syria with all resources at its disposal, including cash, weapons, fighters, and even diplomacy in recruiting the Russians to fight in support as well.

For the mullahs in Tehran, Syria is a key linchpin in their grand plan to build a Shia arc of influence across the Middle East and they have fought tooth and nail to preserve the Assad regime since its collapse could lead to the type of regime change within Iran they have long feared.

But now Iraq is looming just as large for them as a prize worth defending and the mullahs see an opportunity in the turmoil that is now roiling Iraq.

Remember that under the maligned tenure of former Iraqi prime minister Nouri al-Maliki the Iranian regime had literally run the Iraqi government, forcing the ouster of Sunni partners from the coalition government which then provided the ground for ISIS spreading out of Syria and into Iraq’s western provinces and setting the stage for the quick takeover of Mosul.

This weekend however saw a new threat to Iraq’s stability, as followers of radical Shiite cleric Moqtada al-Sadr staged a protest by storming and taking over the Iraqi parliament in Baghdad’s fortified International Zone; ostensibly over government corruption. The protesters were angry of the government’s failure to fight corruption within the institutions and particularly to oust Maliki and his men from various security and government apparatus.

But the takeover may portend a power struggle between Iraqi and Iranian Shiite factions over who controls Iraq as the Iranian regime has armed, trained and supported Shiite militias that are on par with the Iraqi army in terms of capabilities, spurring many Iraqis to resent Iranian influence over their country.

During the takeover Sadr departed for Iran in a meeting that many analysts suspected was an effort to broker a power-sharing arrangement with the mullahs in Tehran. His departure came as a spokesman for Iran’s foreign ministry, Hossein Jaberi Ansari, “expressed Iran’s readiness to use all its links in line with paving the way for Iraqi talks,” according to an official statement carried by Iran’s state-controlled news agency.

Though Sadr is considered by some in Iran’s political establishment as an unpredictable partner, he is unlikely to buck the wishes of a key patron, said Kenneth Pollack, a Middle East expert at the Washington-based Brookings Institution.

“I can’t remember him ever going against the Iranians,” said Pollack in the Wall Street Journal. “Whatever he has done has tended to be quite consistent with Iranian interests.”

A more practical suggestion for Sadr’s actions being made is that he may simply be applying pressure on his Iranian patrons in order to elevate his own standing within Iraq and make clear his militias and followers deserve the lion’s share of political patronage within the country.

Sadr’s history of close coordination with Iran brings back memories of the bloody battles his forces fought against U.S. and coalition forces during the sectarian uprising in Iraq from 2005-06, which caused scores of American deaths, especially with explosive devices built by Iran’s Quds Forces.

Retired U.S. Air Force Lt. Gen. Tom McInerney explained his view of how Sadr may be actually working to strengthen the Iranian hold over Iraq.

“You have a combination of Iranian Shiite and Iraqi Shiite competing as to who controls the government and who controls Iraq. That’s the bottom line of what’s going on over there right now,” he added.

Many critics of the Obama administration’s policies in Iraq, including the withdrawal of U.S. forces, point out the similarities of how the U.S. has created power vacuums the Iranian regime has been eager to fill and expand its influence in an effort to build a perception throughout the region that Iran was a powerful force, when in fact its holds over Iraq, Syria and Yemen have become more precarious.

That policy of appeasing the Iranian regime has been contrasted during the presidential campaign Donald Trump and Hillary Clinton’s more hawkish views on Iran, especially holding the regime accountable for its behavior in the areas of human rights and sponsorship of terrorism.

The fact that both candidates may end up being the presumptive nominees this fall has forced the Iran lobby to step up its campaign to influence the election debate, especially aiming key messages at the Clinton campaign in the hopes of convincing it to follow through on Obama administration policies that have grown lenient on the Iranian regime.

Proponents of U.S.-Iran diplomacy have voiced concern in the past over the fate of relations between the two countries if (Clinton) succeeds Obama. “I am worried about her instinct,” Trita Parsi the head of the National Iranian American Council, told The Huffington Post in January. “She is far too inclined to think that only pressure works.”

Clinton vowed in a speech in September 2015:

“I will build a coalition to counter Iran’s proxies, particularly Hezbollah.  . . . Beyond Hezbollah, I’ll crack down the shipment of weapons to Hamas and push Turkey and Qatar to end their financial support. I’ll press our partners in the region to prevent aircraft and ships owned by companies linked to Iran’s Revolutionary Guard from entering their territories and urge our partners to block Iranian planes from entering their airspace on their way to Yemen and Syria. Across the board, I will vigorously enforce and strengthen if necessary the American sanctions on Iran and its Revolutionary Guard for its sponsorship of terrorism, its ballistic missile program, and other destabilizing activities. I’ll enforce and strengthen if necessary our restrictions on sending arms to Iran and from Iran, to bad actors like Syria. And I’ll impose these sanctions on everyone involved in these activities, whether they’re in Iran or overseas. This will be a special imperative as some of the U.N. sanctions lapse, so the U.S. and our partners have to step up. . . .”

We can hope she continues on that track and ignores the entreaties of Parsi and his ilk from the Iran lobby.