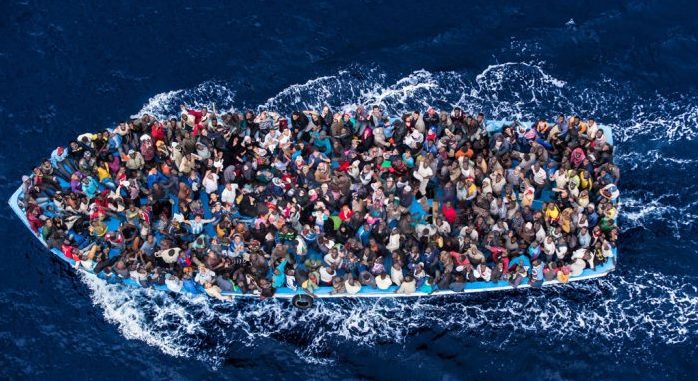 4/Hundreds of refugees and migrants aboard a fishing boat are pictured moments before being rescued by the Italian Navy as part of their Mare Nostrum operation in June 2014. Among recent and highly visible consequences of conflicts around the world, and the suffering they have caused, has been a dramatic growth in the number of refugees seeking safety by undertaking dangerous sea journeys, including on the Mediterranean.
The Italian Coastguard / Massimo Sestini

According to the United Nations refugee agency, 2015 marked the highest level ever recorded for the number of refugees around the world with an estimated 65.3 million people either refugees, asylum seekers or internally displaced; an huge increase of five million people over the year before.

This represents one out of every 113 people on the planet according to the UN; a stunning number and one that puts into sharp relief the existential refugee crisis facing not just the Middle East, but the entire world today. The report, entitled Global Trends, noted that on average 24 people were forced to flee each minute in 2015, four times more than a decade earlier, when six people fled every 60 seconds.

At the heart of that refugee crisis lie the root cause which is the rise of Islamic extremism and the wide number of wars and conflicts being waged by groups supported and affiliated with the Iranian regime.

In its annual report marking World Refugee Day, the UN said it was the first time the number of refugees worldwide had passed the 60 million mark.

“More people are being displaced by war and persecution and that’s worrying in itself, but the factors that endanger refugees are multiplying too,” said UN High Commissioner for Refugees Filippo Grandi.

Over half of the total comes from just three countries: Syria, Afghanistan and Somalia.

The Iranian regime’s involvement in coming to the aid of the Assad regime in Syria turned what was once peaceful demonstrations into what has now becoming one of the bloodiest wars on the planet. The Iranian regime’s recruitment of Russia to enter the fight in support of Assad only worsened the crisis and spurred the exodus of over half of Syria’s entire population.

The Iranian regime’s involvement in Afghanistan has also included using Afghan refugees to serve as mercenaries and cannon fodder for the fight in Syria. The other areas feeding into the refugee stream fleeing Iranian-inspired violence includes Yemen and Iraq, which accounted for a stunning 4.4 million people who were displaced due to the sectarian conflict fed by Iranian-supported Shiite militias.

Sadly, over half of the total refugees in the world are young children who are caught in the middle of these bloody conflicts. It also shows the Iranian regime’s callous disregard for youth since its own laws now allow for the execution of juveniles in Iran, which its religious courts have carried out with considerable vigor, hanging young boys and girls.

The Iran lobby has vigorously sought to defend the Iranian regime and attempted to portray the government of Hassan Rouhani of being a possible solution for the refugee crisis by attempting to moderate the hardline policies of the regime.

The reality has been the complete opposite as the mullahs have widened the Syrian war and initiated new ones in Yemen and Iraq.

At the heart of the increase in spreading Islamic extremism out of Iran have been the Revolutionary Guard Corps and its notorious Quds Force. Ray Takeyh, a senior fellow for Middle Eastern studies at the Council on Foreign Relations, examined the deepening role of the IRGC in Defense One in pushing the mullahs’ agenda and destabilizing the entire region.

“Iran seeks to become the most important player in Iraq and Syria and a commanding voice in the Gulf. The Guards, particularly the Quds Brigade, now numbering about fifteen thousand, are in the forefront of projecting Iranian influence. Among other tasks, they help train and provide intelligence for forces fighting on behalf of Bashar al-Assad’s regime in Syria and assisting Shia militias arrayed against Islamic State forces in Iraq,” he writes.

“In the coming years, the Guards are likely to be a force in both Iranian as well as regional politics. The Guards and the hardline clerics have a relationship of mutual dependence. As deeply pious men, the Guards need the approbation of the priestly class. And as politicians seeking power and regional preeminence, the clerics need the reliable muscle of the Guards. The region’s future may yet be defined by the compact between these two forces,” Takeyh adds.

The oppressive power of the Guards is necessary given the rising dissatisfaction of the Iranian people who have yet to witness any tangible benefits from the nuclear deal reached last year and instead have fumed at severe human rights crackdowns and deep corruption coming to light.

Revelations that senior Iranian government employees were being paid astronomical salaries have rocked the country and threatened popular support for the president, Rouhani. The revelations, which have sparked widespread anger, have continued to dominate front pages across the country, and even led to the resignation of the head of the state insurance regulator, Mohammad Ebrahim Amin.

The scandal first erupted two months ago when a series of payslips surfaced online, which showed a number of top executives at the state insurance company were being paid monthly wages roughly 50 times higher than the lowest government salary.

In a letter to his vice-president, Rouhani sought to deflect blame to previous administrations for the high salaries, but he cannot escape the deeply rooted belief among Iranians that the mullahs and Rouhani’s administration are corrupt and only invested in protecting themselves and their families.

Discontent with the Rouhani-led regime has bubbled to the surface among Iran’s young people who resent the lack of economic opportunity, the strictures against women in terms of jobs, education, dress and social activities, and the harsh treatment of anyone using social media inappropriately or engaging in activities deemed subversive by the mullahs.

The Financial Times examined one growing area of protest as Iran’s youth have sought to find more ways to express their discontent with the regime’s policies.

It is happening as growing numbers of young, city-dwelling Iranians push back against conservative traditions and religious restrictions.

The widespread use of smartphones means teenagers spend most of their spare time on social media, notably Telegram, a popular messaging app, and Instagram. They join Telegram groups that have thousands of members across the country, the FT added.

Ultimately, the hope and future for Iran’s freedom may very well lie with these future generations.