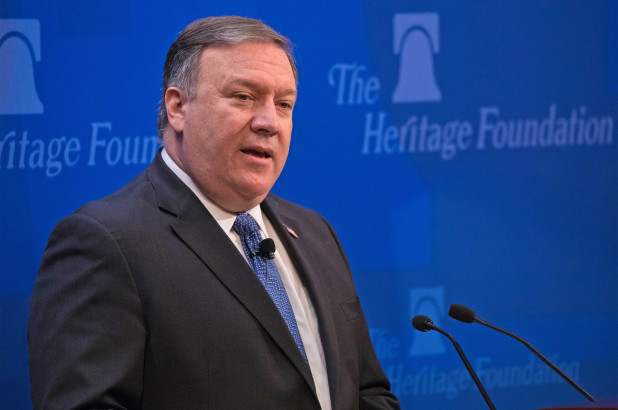 In a landmark speech to the Heritage Foundation, U.S. Secretary of State Mike Pompeo laid out the Trump administration’s new policy towards the Iranian regime including a list of a dozen conditions the mullahs would need to address to move forward with the U.S. in a new relationship.

Chief among those conditions was a new requirement that the Iranian regime would have to stop enriching all uranium and supporting militant groups such as Hezbollah and the Houthi; conditions that the Obama administration had tossed aside in its haste to nail down a nuclear deal with almost no pre-conditions.

In exchange for accepting these new conditions, Pompeo laid out the U.S. would lift punishing economic sanctions, restore diplomatic relations, open up commercial activity and give Iran access to advanced technology it badly needs to revitalize its economy and infrastructure.

The policy as laid out by Pompeo essentially resets the clock to the period before the Iran nuclear negotiations ran off the rails when crushing and comprehensive economic sanctions from countries around the world had dragged the Iranian regime kicking and screaming to the bargaining table where the Obama administration promptly gave away the proverbial house.

If this was a game of high stakes poker, the Obama team folded even before the flop, paying the price of the ante, but never seeing the hole cards.

Of course, the idea of a new, revised agreement that finally corralled the regime’s worst instincts was greeted with skepticism by European leaders.

Boris Johnson, the British foreign secretary, said the U.S. decision to fold all of its disputes with Tehran into a “jumbo Iran treaty” would be very difficult to achieve “in anything like a reasonable timetable,” according to the Wall Street Journal.

Federica Mogherini, the European Union’s foreign-policy chief, insisted the Iran agreement President Trump had abandoned remained the best way to contain Tehran’s nuclear efforts and said the EU would support it as long as Iran did. “The deal belongs to the international community,” she said.

But the new policy articulated by Pompeo is a clear demonstration of what should have been on the table in the original negotiations back in 2015. If the U.S. had exercised its leverage at that crucial moment, the devastating wars in Syria and Yemen may have never taken place.

Predictably the National Iranian American Council led the braying chorus of naysayers attacking Pompeo’s speech and leading the charge was Jamal Abdi, recently anointed as the new president for NIAC.

“The Trump Administration is setting the stage for a war of choice with Iran, with Mike Pompeo offering a smokescreen of diplomacy to distract from the administration’s pursuit of Iraq-style regime change,” Abdi said in a statement released by NIAC.

“Trump is renting out U.S. Middle East policy to the highest bidder – in this case Saudi Arabia, the GCC states, and Israel – and expecting ordinary Americans and U.S. service members to shoulder the burden of a regional escalation, a potential trade war with our allies, and a new Iraq-style regime change war in the Middle East.”

Abdi may be replacing Trita Parsi, but the rhetoric and misstatements are still the same. NIAC once again trots out the war fears in a false flag effort to convince Americans that the president wants to wage war against Iran; forgetting that then-candidate Trump was the one of the first on the campaign trail to criticize the Bush administration’s decision to invade Iraq and has been reluctant to commit U.S. combat troops to any new escalation, especially during the bloody Syria civil war.

Abdi of course neglects to mention that Iranian regime was responsible for the escalation that killed over 400,000 people in Syria, when it shipped Hezbollah fighters, then its own Revolutionary Guards to fight there.

Abdi doles out the same tropes the Iran lobby has used before, but now they ring hollow with the benefit of hindsight. The three years since the deal have shown how an unrestrained Iran has radically reshaped the Middle East and resulted in deaths from the Mediterranean to the Indian Ocean and the essential failure of the promises made by NIAC and the Iran lobby: the nuclear deal did not moderate the Iranian regime but unleashed it.

Now that Iran’s economy is reeling from corruption, mismanagement and diversion of billions of dollars to its military and terrorism, the mullahs in Tehran are under enormous pressure from mass protests across the country since last December, which is why the Trump administration views this as an opportunity to reset the situation and bring about a more comprehensive deal.

In his own unconventional style, President Trump sees an opportunity here to correct what the previous administration fumbled and the Iran lobby has been rendered largely impotent in trying to stop him.