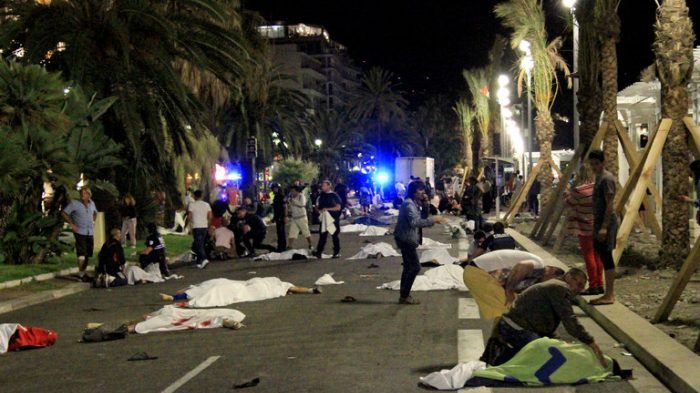 July 14th Proves Infamous in More Ways Than One

July 14 is traditionally celebrated throughout France as Bastille Day, the national day of independence for the French republic. The nation marks it with parades, family outings, fireworks and all the trappings of a national holiday; not dissimilar to the 4th of July in the U.S.

July 14, 2016 also marks the one year point since the Iran nuclear deal was reached by the P5+1 group of nations. Both milestones were joined by a more dubious one last night in which a purported terrorist attack struck the tony waterfront promenade of the French seaside resort of Nice where a man drive a large panel truck down a street packed with thousands of revelers watching a fireworks display.

As the large white truck veered widely left and right—appearing to aim at hapless bystanders—scores of people were flung like rag dolls or dragged and crushed underneath. Initial reports by French officials cited 80 killed, including two Americans, and another 20 critically injured with many more wounded.

French President Francois Hollande declared it a terrorist attack after a cache of grenades and weapons were also found in the struck after the driver engaged with police in a firefight before being killed.

This attack follows the Charlie Hebdo killings and the massive Paris attacks, bringing the specter of terrorism to the people of France three times now in only 18 months. The sheer brutality of this attack was captured throughout social media as people recorded the carnage, which was celebrated and welcomed on the social media profiles of Islamic extremists and their sympathizers.

Those cities now join the wars raging in Syria, Iraq and Afghanistan. The reach of Islamic terror now cuts across all religions, continents, ethnicities and governments. It respects no boundaries; murdering Muslims next to Christians, Hindus and Jews.

It is a world much different than the one promised by supporters of the Iran nuclear deal. Iran lobby participants such as Trita Parsi of the National Iranian American Council pushed a pile of lies, the foremost amongst them was the promise of a newly-empowered moderate Iran to help stabilize the region and aid in the fight against Islamic extremists and terrorism.

It is noteworthy though that the one year anniversary statement issued by Parsi neglected mention anything about terrorism and its global impact.

“There are a whole host of opportunities that can strengthen U.S.-Iran diplomatic channels and insulate the deal from political opposition – including via efforts to fix sanctions relief complications; pursue sustainable diplomatic solutions in Syria and Yemen; enabling enhanced U.S.-Iran academic exchanges; establishing a permanent diplomatic channel; and by securing the freedom of imprisoned dual nationals like Siamak and Baquer Namazi,” Parsi said.

To say the opposite has happened would be an understatement of monumental proportions. Iran’s intervention in Syria to save the Assad regime from falling set the stage for the rise of ISIS and the expansion of a war that now includes Iraq and Yemen and helped build a terror network that stretches from Lebanon to Nigeria to Libya to Bangladesh.

It is also interesting that Parsi has mentioned the plight of father and son team Siamak and Baquer Namazi; since Siamak is a close personal friend of Parsi and helped found the basis of the Iran lobby and NIAC, without mentioning the despicable practice of the Iran regime to illegal arrest and hold dual nationals such as several Canadians and British citizens now.

The greatest failing of the nuclear deal was the complete separation of holding Iran’s conduct accountable in a whole host of related issues such as missile testing, human rights violations and the sponsorship of terrorism. These issues have fed into the Iranian regime policy of provocation and export of its extremist Islamic theology which has helped set the template for much of the global terrorism we are now experiencing.

Iran does not actively combat ISIS in Syria or anywhere else. Its forces have largely targeted Western-backed rebel groups in Syria, while its Shiite militias in Iraq have greatly aided ISIS by driving Sunni tribes to join its ranks as the result of sectarian conflict and tribal score settling.

Let’s also not forget that the nuclear deal fails at what it is purported to do in the first place which is prevent Iran from getting a nuclear weapon.

In the year since its approval, international monitoring agencies have detected uranium particles at Iran’s Parchin facility even after it was thoroughly scrubbed clean by Iran. Its nuclear infrastructure such as centrifuges remain intact in storage and ready to be reactivated, while the regime continues testing new, improved nuclear-capable ballistic missiles.

Rep. Mike Pompeo (R-KS) put it succinctly in a Fox News editorial saying that “one year on, the region is far less stable as well.  Iran increasingly controls Baghdad, Damascus, Sanaa, and Beirut.  Terror attacks have increased.  While the deal itself is problematic, also devastating is the fact that America is no longer viewed as a reliable partner to our traditional regional allies.”

Robert Spencer, director of Jihad Watch, writing for Breitbart, made the case that Iran is an even greater threat that ISIS noting that Iran already possesses a nuclear program which ISIS does not that be easily restarted.

While ISIS has significant reach especially in its ability to spread extremism among locals through social media, Iranian regime possesses and funds a global network of terror groups it supplies with its own intelligence, fighters, weapons and cash; something that ISIS only aspires to build.

Lastly, while ISIS has called upon its followers to strike at foreigners, the Iran regime has pursued that policy as a military objective for decades from orchestrating the attack on the U.S. Marine barracks in Lebanon in 1983 to the bombing of the Khobar Towers in Saudi Arabia to the killing of U.S. service personnel in Iraq. Iran has been at the center of instituting policies directly leading to the death of Americans.

Ultimately, the attacks in Nice is just another bloody reminder of how Iran’s full-fledged support for Islamic terrorism has set the stage for even more bloodshed and death unless the West acts to support regime change through the Iranian people.