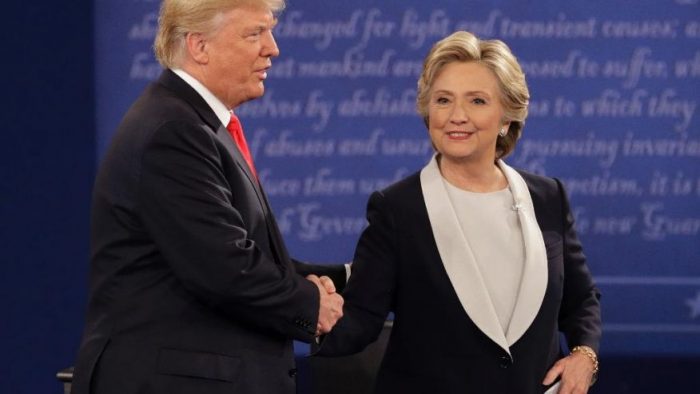 Key to Syrian Solution Lies in Pushing Iran Out

Sunday night’s presidential debate between Hillary Clinton and Donald Trump is sure to be analyzed, dissected and poured over for days, but while both candidates traded accusations on Syria and its effect to refugees, terrorism and geopolitics, neither candidate hit the mark when it came to highlighting the real solution to the Syrian civil war.

The real solution to stopping the bloodshed in Syria lies in getting the Iranian regime out of Syria.

The Syrian civil war has been raging since 2011 and it is easy to forget its beginnings and how it grew into the global conflagration it has become, but what has been indisputable has been the influence of the Iranian regime from the very beginning.

It is useful to recall that the source of the original unrest were protests by ordinary Syrians demanding democratic reforms in March of 2011 and the release of political prisoners. In many respects, the protests taking place on the streets of Damascus were eerily similar to protests on the streets of Tehran by Iranians protesting similar issues in the wake of a presidential election widely recognized as being fraudulent.

Within a month protests had spread throughout Syria and the Assad regime responded just as the mullahs in Tehran did two years earlier; with massive crackdowns by the military that included the indiscriminate shooting of civilians in the streets.

The images of dead and dying civilians in Tehran and Damascus are not the only things that connected the two regimes.

The Iranian regime acted quickly to funnel funds to the cash-strapped Assad regime after a series of punishing international sanctions were imposed for the regime’s use of chemical weapons and mass killing weapons such as barrel bombs on civilians, including hospitals; that support was estimated by the UN to be as high as $6 billion annually, with other human rights groups doubling that amount.

Additionally, the Iranian regime sent senior commanders from its Quds Forces to plan and lead operations involving Hezbollah terrorists to help repel the gains of Syrian rebels. This level of involvement increased with the forced recruitment of thousands of Afghan refugees as mercenaries, along with the shifting of Shiite militias from Iraq to fight in Syria.

The involvement of so much Iranian military capacity led to declarations from Syrian military officials that Syria might as well become a province of Iran.

Even with all of that Iranian regime interferences, the rebels were still making gains leading up to the actual shelling of Assad regime buildings in Damascus, which led to the now not-so-secret trip to Moscow by Quds Force commanders to beg for Russian intervention in Syria.

The increasing tempo of military actions collapsed a proposed cease-fire and led to claims and counter charges between the US and Russia reminiscent of the Cold War. Nothing illustrated that confusion more than the situation in the northern Syrian city of Aleppo.

The New York Times examined the zany alliances at work in Aleppo where there are Iraqi Shiite militiamen cheering for clerics who liken the enemy to foes from seventh-century battles. There are Iranian Revolutionary Guards fighting on behalf of a Shiite theocracy. There are Afghan refugees hoping to gain citizenship in Iran, and Hezbollah militants whose leaders have long vowed to fight “wherever needed.”

The messy mosaic of ground fighters on both sides has challenged Washington’s tangled allegiances. The United States is effectively allied with Iraqi Shiite militias to thwart the Islamic State in Iraq, but in Syria, some of those same militias are fighting on the side of the Assad government, which the United States opposes, and against a mix of rebel groups, some of them backed by the Obama administration.

The Daily Caller discussed the vast increases in Shiite militias in Syria.

“Most estimates of the total number of Shi’a militia fighters in all of Syria now exceed 60,000,” U.S. strategic advisory firm The Soufan Group notes. The Soufan Group highlights that this number may even exceed that of the actual Syrian Arab Army under command of Assad. These Shiite militias take orders only from Iran’s Revolutionary Guard Corps.

Alarmingly, even though the evidence is overwhelming that the only viable solution to Syria’s war lies in containing and ultimately removing Iran’s control of the Assad regime, the Washington Post reported efforts were underway by the Obama administration to actually weaken sanctions imposed on Syria.

According to lawmakers and staffers in both parties, the White House is secretly trying to water down the Caesar Syria Civilian Protection Act, a bipartisan bill that would sanction the Assad regime for mass torture, mass murder, war crimes and crimes against humanity. The bill, guided by House Foreign Affairs Committee ranking Democrat Eliot Engel (N.Y.), would also sanction entities that aid the Syrian government in these atrocities; that includes Russia and Iran.

The bill, named after a Syrian defector who presented the world with 55,000 pictures documenting Assad’s mass torture and murder of more than 11,000 civilians in custody, has 70 co-sponsors, a majority of whom are Democrats.

Now the White House has told members and staffers that the bill’s sanctions on Iran could violate the nuclear agreement the Obama administration struck with Tehran last year and the Russia sanctions could hurt any future efforts to work with Moscow diplomatically on Syria.

It is a stunning position to take and one disturbingly similar to arguments made by Iran lobby members such as the National Iranian American Council.

It seems that the similarities between Syria and Iran be beyond just murdered civilians in the street.