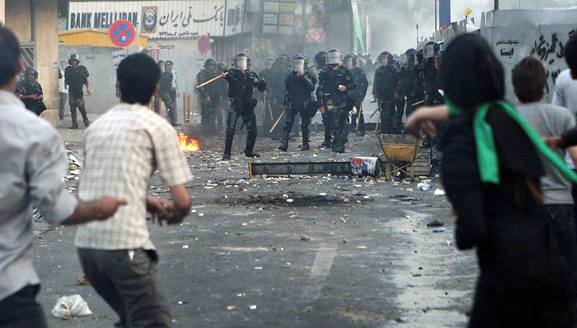 Back in 2009, the Middle East was being rocked by the Arab Spring, a pro-democracy movement that toppled governments throughout the region and put despotic regimes on the defensive.

At the time, the Iranian regime’s much despised president Mahmoud Ahmadinejad was running for “re-election” in a contest widely viewed as unlikely for him given the historic disapproval of the Iranian people and their deep desire for democratic change.

But as with all things under the careful watch of the mullahs, his election was essentially guaranteed in what the international community dubbed a rigged election.

In response, Iran was rocked with mass protests and demonstrations the likes of which the Iranian regime had not seen before in the most serious threat to the iron rule of the religious establishment. Alarmed and in response to keep their hold on power, the top mullah Ali Khamenei ordered a widespread crackdown that set human rights back in Iran decades in resulted in scores killed and thousands beaten, arrested and imprisoned.

The mass protests were aided in large part by the emergence of social media which helped rally young and old Iranians alike to dispute the election and served as a splash of cold water in the regime’s face that it would have to change as well, but not in terms of granting more freedoms.

By the time 2013 rolled around, the mullahs had gotten wise to international opinion and instead staged an election by removing anyone from the ballot that could even be considered a dissident and instead offered up an old loyalist in Hassan Rouhani repackaged as a smiling, tweeting, kindly “moderate.”

The end result was another sham election and in comparison to 2009 with favorable media attention abroad. It was also aided by the creation of an Iran lobby apparatus designed to push forward more positive narratives about the regime in news media and among elected officials, especially the National Iranian American Council.

Since then, while Rouhani has paraded himself as ca champion of the oppressed, Iran has plunged even further into disrepair.

It is involved now in two full-blown wars in Syria and Yemen, while spending billions of dollars in cash to support the Assad regime, Shiite militias in Iraq, its long-time Hezbollah proxy, and a rebuilding of its vast military.

It has also cracked down viciously at home, oppressing women, religious and ethnic minorities and even going on a binge of hostage taking amongst dual-national citizens including Americans, Canadians and Brits.

Now the stage is set for another election this May and once Khamenei has set the table by declaring that the regime would not tolerate any interference; meaning only the regime’s candidate will be elected and everyone should stay off the streets.

“I will confront anyone who wants to tamper with the results of the people’s vote. In previous years and previous elections …, it was the same. Some of it was in front of people’s eyes and they became aware of it. And some of it they were not aware of but I was informed about it,” he said in Iranian New Year remarks carried live on state television, according to Reuters.

“It was revealed in 2009 – they came out and drew battle lines. And in other years in other ways, but in all these years I stood against them and said whatever the results of the election are, they must be carried out.”

Two of the candidates from the 2009 presidential election, which put hardliner Mahmoud Ahmadinejad into office for a second term despite large protests over alleged vote fraud that shook the Islamic Republic, have been under house arrest since 2011. Although part of the regime apparatus, they were detained for calling for street protests at the same time that pro-democracy uprisings were convulsing Tunisia and Egypt.

This year’s election will never be in doubt. Whoever Khamenei wants is going to win, this is a matter of course since he controls the policy making body that will have final say on whoever gets on the ballot in the first place.

Imagine if the Democratic or Republican parties had final say on who got on a presidential ballot without having to suffer through the rigors of a primary contest? In essence, that is what the Iranian regime does on a regular basis; it’s a rigged game.

But the Iranian regime is becoming more sophisticated in the ways of politics. Just as it adjusted to the brutal crackdowns following the 2009 elections, it is following up on the initial creation of the Iran lobby with a broader call for more Iranians in the West to become active lobbyists for the regime’s causes as outlined in an editorial by Michael Rubin in Commentary.

“An Iran watcher and Iranian citizen recently alerted me to this clip showing Mahmoud Alavi, Iran’s intelligence minister, on Iranian national television suggesting there are Iranians in the West who have a lobby for the regime,” Rubin said.

“Alavi does not mention NIAC, but the number of politically active groups that focus on issues of sanctions, defending Iran’s ballistic missile program, and Iran’s nuclear program can like be counted not only on one hand but rather on one finger. If Iran’s intelligence minister believes that Tehran can leverage a specific lobby in the West on behalf not of Iranians but rather of the Islamic Republic, perhaps it is time for American counterintelligence authorities to take a far harder look at whatever lobby to which Alavi might be referring,” he added.

Rouhani’s election will be critical as the regime enters a new phase of expansion and aggression as it puts its newfound billions in cash it received as part of the nuclear deal to good use in furthering the war in Yemen and securing Syria as part of its Shiite sphere of influence.

According to Reuters, Iran is sending advanced weapons and military advisers to Yemen’s rebel Houthi movement, stepping up support for its Shiite ally in a civil war whose outcome could sway the balance of power in the Middle East, regional and Western sources say.

Sources with knowledge of the military movements, who declined to be identified, say that in recent months Iran has taken a greater role in the two-year-old conflict by stepping up arms supplies and other support. This mirrors the strategy it has used to support its Lebanese ally Hezbollah in Syria.

We may very soon see the Arabian Peninsula erupt in a war not unlike what has convulsed Syria if the mullahs have their way.