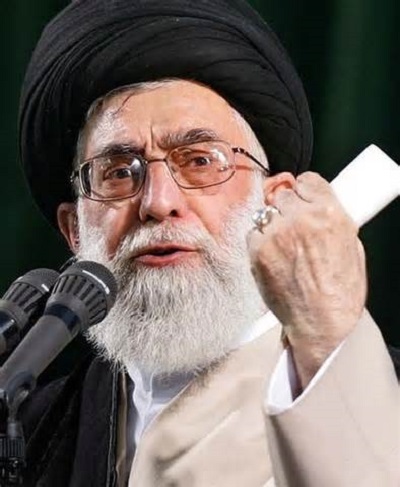 Benjamin Franklin famously said “In this world nothing can be said to be certain, except death and taxes.” If Franklin were alive today, he might add mullah’s Supreme Leader Ali Khamenei to the list of certainties.

Yesterday in a public speech in Tehran carried by the official IRNA news agency, Khamenei once again vowed Iran would resist global sanctions in its pursuit of nuclear capability and threatened to cut off natural gas exports in retaliation to any continued sanctions.

“Serious work must take place. We can withstand the sanctions and neutralize and foil the enemy’s goals. If we don’t, the enemy would proceed and place conditions on our nuclear program and impose sanctions,” Khamenei said.

“If sanctions are to be the way, the Iranian nation can also do it. A big collection of the world’s oil and gas is in Iran so Iran if necessary can hold back on the gas that Europe and the world is so dependent on,” he added.

It is noteworthy Khamenei still refers to the West and especially the U.S. as the “enemy.” His worldview is clouded by the long-simmering extremist view he has nurtured for the past several decades and seems unable to move forward into a new era of peace and prosperity. He clings to the notion Iran must resist all attempts at compromise and maintain a virtual war footing.

But Khamenei’s threats ring hollow when you consider Iran’s total oil production is estimated at 2.7 million barrels per day, mostly for domestic use. It also produces 600 million cubic meters of natural gas, of which 500 million cubic meters is used at home, meaning Iranian regime’s ability to “punish” Europe with a natural gas embargo is about as real as finding a unicorn.

But Khamenei didn’t stop there. He went on to accuse the U.S. of secretly supporting ISIS and criticized the European Union for placing sanctions on the National Iranian Tanker Company, the regime’s largest tanker company for carrying its petroleum overseas.

All of which flies in the face of recent frantic efforts by the Iranian regime’s lobbying and PR machine to convince the American public Iran does indeed want a compromise in current nuclear talks, even after two previous rounds of talks failed largely because of Khamenei’s hardline position and refusal to accept any deal compromising Iranian regime’s ability to generate large quantities of enriched uranium for use in nuclear warheads.

One might even feel slightly sorry for Iranian regime loyalists such as Trita Parsi of the National Iranian American Council who wax poetic about Iran’s desire for compromise only to be torpedoed on a regular basis by a new rant by Khamenei that reinforces and reminds Americans how mad the guy really is.

But any sympathy evaporates when we realize the stakes involved in this tense game of chicken Khamenei is playing. For all his bluster, he acts like he has virtually no interest in a deal. He regularly dumps on the U.S. He pushes for harder crackdowns at home in gross human rights violations. He has directed a foreign policy and controls a military and intelligence service involved in conflicts in almost a dozen countries now.

Just as ISIS has designs on a new fanatic Islamic caliphate, Khamenei shares the same vision for an Iranian-controlled sphere of influence. It is a dream born out of his virulent hatred of all things from the West including gender equality, free speech, an uncensored media and an unfettered internet.

As negotiators continue talks, they should not ignore the latest outburst by Khamenei because in most people’s minds, three strikes is usually enough to call someone out.