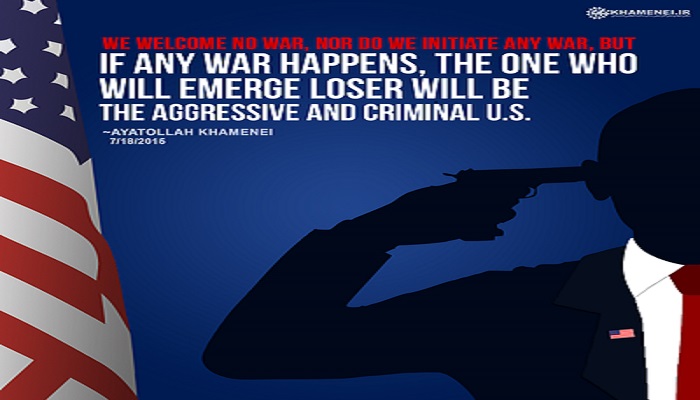 Iranian leader tweets graphic of Obama with gun to head From: http://www.usatoday.com/story/news/world/2015/07/25/iranian-leader-tweets-graphic-obama-gun-head/30667081/

“US president has said he could knock out Iran’s military. We welcome no war, nor do we initiate any war, but…”

The tweet appeared underneath a graphic depicting an image appearing to be President Obama holding a gun to his head. The quote in the image attributed to Khamenei said:

“If any war happens, the one who will emerge loser will be the aggressive and criminal U.S.”

Khamenei has been as regular as clockwork in his periodic rants against the U.S. generally and the proposed nuclear deal specifically, using his Twitter feed to send out his own version of “red lines” the regime would not cross in any nuclear deal, while only last week delivering a speech claiming America’s aims in the region were “180 degrees” opposite of Iran’s.

Supporters of the regime ignored the tweet and its implications. For example, Trita Parsi, head of the National Iranian American Council and the regime’s lead lobbying organization, did not even mention the offensive tweet in his own Twitter account, preferring instead taking shots at those opposing the deal.

The fact is Khamenei is Iranian regime’s supreme leader. There is no other chief executive above him. His decisions on foreign policy, going to war, executing political prisoners, issuing a new religious law affecting all of Iran’s citizens or deciding what flavor of ice cream to outlaw are absolute and undisputed.

Consequently his comments are not trivial, nor should they be taken lightly or ignored. In most ways his comments, even nuances, are as important to understanding his intentions as during the Cold War when the West tried to divine the intentions of Soviet leaders by who was standing next to whom during May Day parades of military hardware.

But aside from Khamenei’s comments and tweets, the regime took steps to ensure there was no domestic disputes over the proposed nuclear deal in order to ensure its passage so that the regime could gain access to the estimated $160 billion in frozen assets and military hardware it desperately needs after waging three proxy wars in Syria, Iraq and Yemen.

A top secret document sent to newspaper editors has surfaced on the internet.

Issued by the ministry in charge of the press, the two-page document faxed to media organizations relays directives from Iran’s Supreme National Security Council. It says editors should praise the deal and the negotiating team.

It stresses the need “to safeguard the achievements of the talks”; avoid sowing “doubt and disappointment among the public”; and avoid giving the impression of “a rift” at the highest levels of government.

The irony is unmistakable as it clamps down on any domestic dissent, while the regime’s leadership is allowed to freely express its disdain for the U.S. and the conditions laid out in the agreement such as inspection of Iranian military facilities.

Interestingly, the regime directive asked Iranian news media to “note the big achievements in our nuclear program as a result of the agreement”; a candid reassurance of the wins for the regime under the deal.

In contrast the criticism of the deal in the U.S. continued to grow as former U.S. ambassador to the United Nations John Bolton issued a scathing critique in the Los Angeles Times, declaring:

“Assuming Iran scrupulously complies with every provision agreed to in Vienna — an absurdly unlikely scenario given the ayatollahs’ objectives and history — its ambitions for nuclear weapons will simply have been delayed eight to 10 years.

“In all likelihood, the ayatollahs are already at work violating the accords. After all, Iran has systematically breached its voluntarily-assumed obligations under the Nuclear Non-Proliferation Treaty for more than 30 years,” Bolton writes.

“Moreover, Iran’s ballistic missile efforts — its development of the means to deliver nuclear weapons all over the world — will barely be touched. Nor does the deal in any way address Iran’s clandestine weaponization efforts, which it has denied and hidden from the International Atomic Energy Agency with great skill,” he added.

Also, a previously undisclosed report by the Obama administration led several lawmakers in Congress to conclude world powers will never be able to get to the bottom of Iran’s efforts to build a nuclear weapon and that the regime would never be fully pressed to explain its past nuclear program efforts.

“Details of the report, which haven’t been previously disclosed, indicate the deal reached this month could go ahead even if United Nations inspectors never ascertain conclusively whether Iran pursued a nuclear weapons program—something Tehran has repeatedly denied,” according to the Wall Street Journal.

“Some senators complained last week that they were told by administration officials that Iran would be allowed to manage some of the IAEA’s investigation. They said they were told Tehran would conduct its own soil sampling at a military site called Parchin, where, allegedly, explosive devices were tested,” the Journal reported.

The entire process is rightly ridiculed by lawmakers and critics of the deal. It is akin to asking a suspected criminal to gather evidence at his own crime scene and hand it over to investigators.

It is provisions such as this and many others in the 159 page agreement, as well as in two secret side deals made with the International Atomic Energy Agency and the regime which has yet to be made public that has made many in Congress highly skeptical.