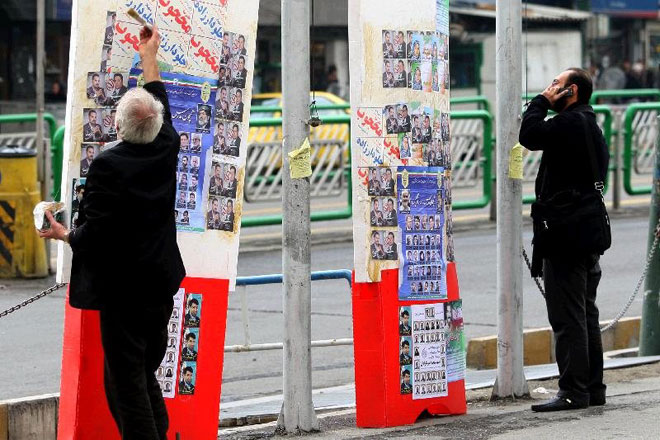 Kickoff of Campaigning in Iran Hides Suppression of Human Rights

The campaign season has kicked off and we’re not talking about the U.S. presidential campaign. In Iran the official campaign period for parliamentary elections for slates of candidates that passed ideological muster.

For most people living in democracies, the Iranian regime’s election system can be nothing short of baffling. It’s a system that begins and ends with a focus on ideological and religious purity and adherence to the Islamic revolutionary ideals it was founded on.

It is also a peculiar system in which the process of reviewing, vetting and examining candidates takes seven weeks to process, but the actual campaign season lasts just seven days.

Of the 12,000 candidates who were submitted for consideration to run for parliamentary seats and positions on the Assembly of Experts, nearly half of them were eliminated from the ballot by the Guardian Council, which is comprised of six mullahs and six law experts all appointed directly and indirectly by top mullah Ali Khamenei. The mere fact that the regime is empowered to eliminate any candidate it deems unfit to run virtually pre-ordains any election outcome in the regime’s favor.

In the case of the Assembly of Experts, of the 800 that applied, only 161 – all men – were approved by the Guardian Council; a miniscule 20 percent.

It’s also noteworthy that in Iran, there are over 250 registered political parties, but virtually none of them represent any true opposition groups such as the Mujahedeen-e-Khalq (MEK), a long-time resistance group which is outlawed and the regime vigorously pursues any of its members. The last two main reform-minded political parties were officially banned after the election fiasco of 2009 which resulted in massive protests that were violently put down.

Because of the complete control the regime has over political parties and the ballot, one would think that would be enough to guarantee any election, but in Iran, all ballots are also counted manually and subject to all kinds of shenanigans just in case any candidate who won a seat had a sudden change of heart and wished to oppose the mullahs.

The parliament often serves simply as a rubber stamp for Khamenei’s policies since it lacks the constitutional power to oppose foreign policy, military or other matters of state security. The approval of the nuclear deal is an example of that kind of blank check for Khamenei and his puppet, Hassan Rouhani.

According to Agence France-Presse, “the nuclear deal has partly ended Iran’s isolation but it has been followed by warnings from Khamenei that the military must guard against economic and cultural ‘infiltration’ by foreign actors who aim to damage the Islamic republic’s revolutionary principles.”

“Although parliamentarians backed Rouhani on the nuclear deal they did so less out of a sense of support for the president than because Khamenei made it clear he wanted sanctions lifted,” said AFP.

The closed nature of the regime electoral process allows the Iran lobby a certain flexibility to portray it in a more flattering light; not in the sense that’s at all fair, but rather in portraying certain candidates as “moderates” when in fact very few who pass vetting would be considered a true moderate, let alone a dissident reformist.

An example of that kind of PR spin control comes from the Iran lobby supporters such as the National Iranian American Council (NIAC) which has consistently pushed the idea that the elections would shine a light on growing moderate forces as a result of the nuclear deal.

But the crackdown on dissidents in advance of the elections, wiping off the ballot any conceivable opposition candidates, including the elimination of virtually all women candidates have forced even reliably supportive blogs such as Lobelog.com to print some guest columns describing the elections as “fixed.”

“In order to pass through the punishing vetting process and stand for election, Iranian citizens must comply with a huge set of restrictive criteria, including holding a masters’ degree, adhering to Islam, showing loyalty to the Constitution and the Supreme Leader, and having a spotless political (and mostly spotless criminal) record,” wrote Small Media, a London-based digital advocacy group, in a guest column.

“As evidenced by all the available data, these upcoming elections have been very tightly managed by Iran’s conservative establishment, with the Guardian Council weeding out more than half of the country’s hopeful parliamentary candidates during the vetting process,” Small Media added in what was the closest thing to a criticism of the Iranian regime Lobelog.com has published in a long time.

The fact that there is no real opposition to the mullahs allowed and the discussion of moderate elements within regime politics is mainly for international media consumption, it’s pretty obvious why there is so much concern in various capitals over what the mullahs plan on doing after elections when they will wave a so-called “election mandate” to continue their extremist policies.

This is why the results of the upcoming U.S. elections will likely have far more impact on what happens to the regime since the Obama administration has made clear its desire to appease the mullahs at every turn.

The latest example was the recent announcement of an $8 billion agreement by the Iranian regime to buy advanced military hardware from Russia, including the co-production of Su-30 fighter jets which now appear to be in violation of United Nations sanctions imposed as part of the nuclear deal banning the developing of nuclear-capable delivery systems such as bombers and missiles.

“The U.N. resolution to endorse the flawed Iran nuclear deal actually gives the United States and other members of the Security Council the power to review and legally block arms sales by Russia or other actors to Iran,” Sen. Mark Kirk (R., Ill.), a critic of the nuclear accord, told the Washington Free Beacon. “But as Russia and Iran further escalate their use of indiscriminate military force in the Middle East, the administration appears wholly unwilling to use this power.”

According to the terms of the U.N. resolution governing the nuclear agreement, the U.S. and other Security Council members are provided with the power to approve “in advance on a case-by-case basis” most conventional arms sales to Iran.

The statute specifically applies to the “supply, sale, or transfer” to Iran of many conventional arms, including “battle tanks, armored combat vehicles, large-caliber artillery systems, combat aircraft, attack helicopters, warships, missiles, or missile systems,” according to the resolution.

It seems that not only are regime elections fixed, but it seems UN sanctions are rigged as well.