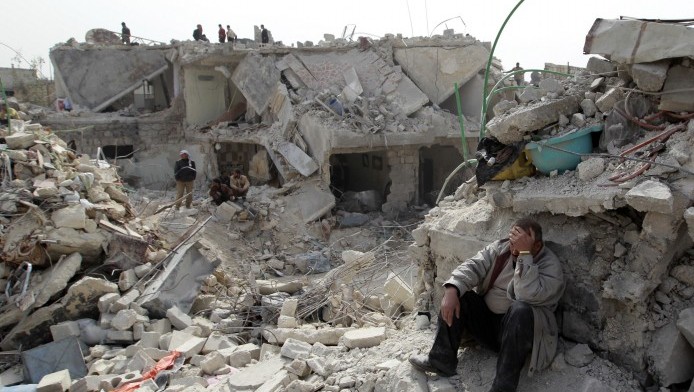 Looking Back at 2015: Iran Regime Chaos in Syria

In December of 2010, the “Arab Spring” revolt swept across North Africa and toppled governments in Tunisia, Egypt, Libya and Yemen, while major protests broke out in various countries such as Iraq and Sudan. The wave of civil discontent took on a much different shape as it developed into what we now know as the Syrian Civil War.

The conflict in Syria started innocuously enough with an assault by a police officer on a man which quickly led to a flurry of street demonstrations in February of 2011, which would have withered away if not for the arrest of 15 children in Daraa in southern Syria who were painting anti-government graffiti on walls.

The children were abused while in the custody of security forces of the Assad regime which led to the first full-scale protests against the regime. This escalated rapidly into mass demonstrations in Damascus, Aleppo and other cities that today we know as battlefields and no-man’s lands.

Protests culminated into a mass demonstration of over 100,000 people in the central Square of Homs calling for Assad’s resignation and then things got ugly as Assad used the military crackdown, killing at least 136 people. The severity of reprisals grew as Assad security forces continued shooting protestors, some while in ambulances.

By the fall of 2011, the Syrian opposition organizes and begins to gather arms and fight back as a full-scale civil war erupts. In the spring of 2012, international pressure grows on the Assad regime. It is at this time things go from bad to worse in Syria as extremist Islamist groups filter out of Iraq and Iran and into Syria to join the fighting including fighters from Al-Qaeda and Jabhat al-Nusra.

As arms begin to flow from Europe and other Arab states opposed to Assad to rebel forces and the Syrian military suffers a series of setbacks, the Iranian regime makes the decision to commit itself fully to keeping Assad in power since both regimes share the same Shiite ties.

The mullahs in Tehran begin to direct the flow of cash and weapons to their long-time terrorist ally Hezbollah and funnel fighters into Syria from Lebanon in support of Assad.

By August of 2012, President Obama proclaims his now infamous “red line” in the sand position in regards to chemical weapons, which Assad crosses when he uses chemical weapons in September of 2013, killing 300 people outside of Damascus.

In an ironic twist of fate, U.S. Secretary of State John Kerry’s offers a rationale for avoiding direct U.S. military intervention in the wake of the chemical attack when he offers the idea that elimination of all chemical stocks would be a condition to avoid going to war. Russia’s Vladimir Putin seizes on the idea and quickly brokers an agreement to take possession of Syria’s chemical weapons by June of 2014.

All of which takes place while the Iran regime deepens its involvement by scaling up and recruiting Afghan mercenaries living in Iran and mobilizing Shiite militias in Iraq to fight in Syria in an effort to stem a rapidly growing number of military defeats by Assad.

In the meantime, the largest displacement of refugees since World War II takes place as half of Syria’s population is dead or leaves with nearly four million of them trying to get into Europe through Turkey, Greece and the Balkans.

At the same time, ISIS takes control of several key cities in Syria and Iraq and takes advantage of the power vacuum created in Iraq’s government when the Iran regime pushes then Prime Minister Nouri al-Maliki’s government to expel Sunni coalition partners who then flee directly into the arms of ISIS in Iraq.

Within two years, Iran’s meddling has prolonged the carnage in Syria, allowed ISIS to double in size almost overnight and reduced Iraq into little more than a fiefdom for ISIS in the north and Iran in the south.

Even as the Iranian regime’s forces suffered setbacks, including the deaths of several top military commanders, it worked hard at the negotiating table to secure a nuclear agreement allowing it to tap into $150 billion in cash and new supply lines in military hardware from Russia to replace its losses.

More importantly, the deal allowed top mullah Ali Khamenei to make a direct appeal to Russia to intervene on Iran’s behalf and save Assad from doom. Iran used the argument that saving Assad would save Russia’s only naval base in the Mediterranean, stationed in Syria.

By the time Russia begins bombing in Syria last September, ISIS-led attacks in Paris and the ISIS-inspired attack in San Bernardino, push the U.S. to focus exclusively on attacking ISIS and raise the very real possibility of keeping Assad in power in order to defeat ISIS.

The past five years have cost the world four million refugees and 150,000 killed and put the Iranian regime back in a position to claim a win after being so close to defeat in Syria so many times.

One only has to ask questions such as “What if Obama acted on his red line?” or “What if the U.S. held tougher in nuclear talks in Iran?” could the world be seeing a much different situation today?

There is no doubt however that the Iranian regime’s intervention in Syria and its mobilization of forces in Lebanon, Iraq and Afghanistan to fight there was the single biggest reason why this civil war did not end in 2011 the war similar governments toppled in Libya, Egypt and Tunisia.

If any entity deserves the blood on their hands for the carnage, bloodshed and suffering in Syria besides Assad, it is certainly the mullahs in Tehran.