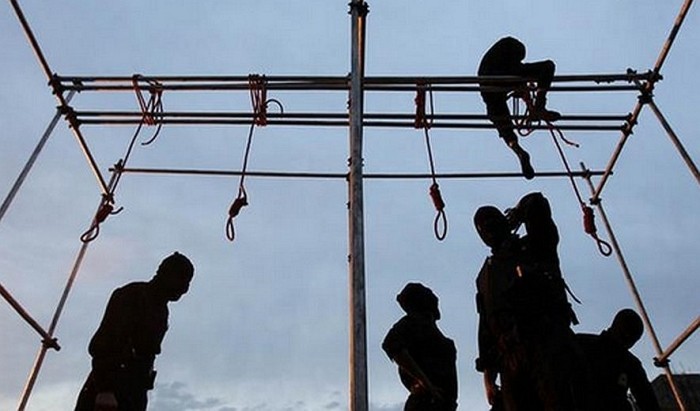 If 2015 has been the “Year of Terror” around the world, it has also been a year for abysmal human rights violations within the Iranian regime and those rights did not get off to an exceptionally strong start when nuclear negotiations between the regime and the P5+1 group of nations delinked improvements in human rights to an agreement.

It was an inauspicious start and things didn’t get much better after that.

In order to maintain a lid on what could be a contentious year domestically as ordinary Iranians chafed under increased economic repression and blatant corruption that benefitted the relatives of the ruling mullahs and commanders in the Revolutionary Guards Corps, the regime cracked down harder on limiting access to social media and internet browsing through its cyber wall and tracking by secret police.

Even though human rights were no longer a priority for the rest of the world, the U.S. did provide an early present to the mullahs when it made a $490 million transfer to Iran as part of the payment for the interim agreement between Iran and the Obama administration during an extension agreed to last November of 2014. Under that agreement, the Iranian regime received a total of $4.9 billion in unfrozen cash in 10 separate payments through June of 2015 in the hopes a final nuclear agreement could be reached.

This cash helped prop up a regime struggling as it poured billions into a growing Syrian conflict to keep the Assad regime in power amid plummeting global oil prices.

Iran’s religious and paramilitary police also continued to enforce religious law on the streets through abusive tactics including public beatings and assaults or arrest and imprisonment. In a further abomination of traditional Islamic values, Iran’s mullahs have allowed over 40,000 child brides to be wedded just in 2014 and adopted a new law in 2015 allowing men to marry their adopted children.

Added to that was the regime’s ongoing war against women in which it confiscated 40,000 cars driven by women who violated strict dress codes, not to mention the lack of enforcement against those who participated in acid attacks against women.

No one was safe against Iranian regime abuses, as The Observer newspaper chronicled the plight of homosexuals in Iran where an estimated 4,000-6,000 gays and lesbians have been executed by the regime since 1979 to today, which is odd considering that while Iran has liberal laws in regards to transgender individuals – helping to pay for such surgeries in fact – these same policies are used to coerce young gays to undergo conversion or face punishment.

Last May, According to report released by Iran Human Rights group, in the 18 months since the election of President Rouhani in June 2013, Iranian authorities executed more than 1,193 people. This is an average of more than two executions every day.

Meanwhile a new short video made the rounds on social media bringing to light the linkages between the Iran regime and ISIS and dubbed Iran the “Godfather of ISIS.” The moniker might smack of a certain hyperbole, but it is nonetheless accurate as to the true nature of Iran’s growing role as a template and model for sectarian violence and mayhem throughout the world.

The short 97-second video, produced for the non-profit, independent news site IranFocus.com, starts off with a narrator discussing the link between Iran’s mullahs and the terror group known as ISIS that sprang up out of the civil war in Syria, but now has tentacles in over a dozen countries in the Middle East, Africa and Asia, but the ISIS coming out party so-to-speak came in Iraq when Syrian forces, backed by the Iranian military, targeted moderate, Western-backed Syrian rebel forces, thereby empowering the radicalized ISIS militias.

Amnesty International’s annual report for 2015 went into extensive detail on the litany of human rights abuses flowing from the mullah’s mandates including restrictions on the freedom of expression, association and assembly, widespread use of torture, codified unfair trials, institutional mistreatment of ethnic and religious minorities, the broad denial of women’s rights, lack of privacy, denial of education, and frequent and indiscriminate use of the death penalty.

Last year, Iran also had the second highest number of executions in the world after China and also killed the most juvenile offenders, according to Human Rights Watch.

Ahmed Shaheed, the United Nations Special Rapporteur for Human Rights in Iran issued a new report saying that the Iran regime was on track to execute more than 1,000 people in 2015 in an unrelenting campaign of brutal human rights suppression that continues unabated after agreeing to a nuclear agreement that proponents said would shift the regime to a more moderate stance.

Calling it an “unprecedented assault on the right to life in Iran,” Shaheed described a surge in executions over the past year. He said Iran hanged nearly 700 people since January.

The most recent UN condemnation came after 36 human rights organizations, led by Human Rights Watch, called on the regime to improve its human rights situation and for the international community to work together to promote human rights within Iran.

Lastly, according to the New York-based Committee to Protect Journalists, at the end of last year, at least 30 journalists were held in Iranian prisons, including Washington Post reporter Jason Rezaian. Others have been detained since, and in August state media accused a senior Wall Street Journal reporter who once served as a correspondent in Iran of conspiring against the government. The Journal called the claims “completely false, outlandish and irresponsible.”

It is ironic that three large Muslim nations, Indonesia, India and Malaysia, are largely free of violent extremism, which is due in no small part to the development of tolerant, multicultural societies where the secular rules the sectarian. They are a true template for Iran’s future, one where the religiously motivated whims of a few dozen old mullahs do not hold sway over the vastness of a region stretching from the Mediterranean to Indian Ocean.

We can only hope things improve in 2016, they can’t seem to get much worse.