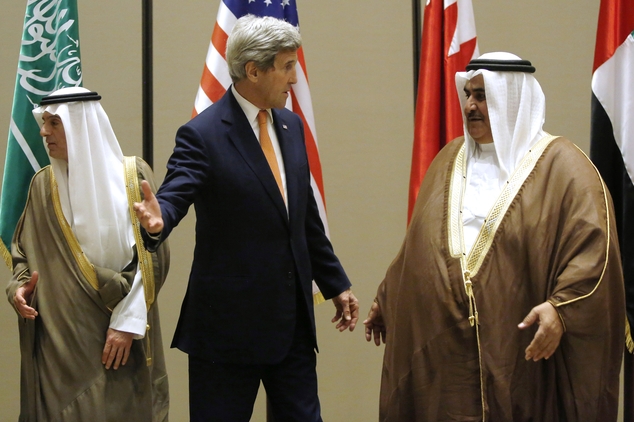 The Gulf Cooperation Council (GCC) is a regional political and economic union of Arab States within the Persian Gulf and includes Bahrain, Kuwait, Oman, Qatar, Saudi Arabia and the United Arab Emirates. Since 1981 when it was founded, it has come to form a cohesive union of Arab states that share in the massive oil wealth of the Persian Gulf and within the last few years has created military alliances to combat the rise of ISIS and the increased militant forays of the Iranian regime.

These states have found themselves at the forefront of various Iranian provocations ranging from Bahrain battling insurgents armed by Iranian agents to Saudi Arabia which is trying to stem a full-scale insurrection on its border with neighboring Yemen fueled by Houthi rebels armed, trained and advised by Iran’s Revolutionary Guard Corps.

These Arab states have also intercepted considerable amounts of arms being smuggled by Iran to various proxies and terrorists to fuel insurrection and strikes at the various states in a stark reminder of how committed the mullahs in Tehran are in destabilizing their Arab neighbors.

All of this highlights one of the untruths uttered by the Iran lobby during the run up to the nuclear deal last year which was securing a deal would empower moderate forces within Iran to take greater control over Iran’s government and temper its more extreme elements.

We now know since the deal was agreed to last July, the Iranian regime has taken every opportunity to step up its military activities throughout the region; from Syria on the Mediterranean to Yemen on the Indian Ocean.

It is against this backdrop that U.S. Secretary of State John Kerry travels to Bahrain for a meeting of the GCC whose members are intent on reading Kerry the riot act about the rise of Iranian extremism.

Part of that process included statements from Kerry and Bahrain’s foreign minister on Thursday urging Iran to stop escalating its provocative behavior and pursue a more constructive foreign policy.

Kerry is in Bahrain to consult with officials from Bahrain and other Gulf Arab countries frustrated by Tehran’s policies and lay the groundwork for meetings between President Barack Obama and Gulf Arab leaders in Riyadh later this month. The president held a meeting in Washington last year with Gulf Arab leaders and senior officials to pledge military aid and calm allies’ nerves about Tehran as the nuclear deal neared completion.

“Today we are noticing two things that we kind have expected,” Sheik Khalid bin Ahmed Al Khalifa, Bahrain’s foreign minister, said, outlining the views of Bahrain and the GCC. “The missile program is moving forward with full support of the leadership of the Islamic Republic and we are seeing the hegemonic interventions through proxies in several parts of our region continuing unabated.”

While Kerry once again stressed the positive virtues of the nuclear agreement, the reality is that the almost slavish dedication to keeping afloat a nuclear deal that is already – for all intents and purposes – dead from the Iranian point of view has allowed the Iranian regime to move forward aggressively on several other fronts now that sanctions have been lifted and it can access a new credit line of $100 billion to replenish its military losses at a critical time for the mullahs.

That reality has forced Kerry to make a complex argument here to the ministers of the GCC, where he repeated that the U.S. would continue to lift the economic sanctions against Iran that it agreed to as part of the nuclear accord, even while imposing new ones to counter Tehran’s missile launches, an effort now underway in the United Nations Security Council.

The bipolar nature of American diplomacy has caused consternation and confusion among America’s allies such as the Gulf states and what can only be construed as unbridled joy amongst the mullahs who are taking advantage of the mixed messages.

But sentiment was hardening against Iran and the weak administration position as the editorial board for the Washington Post decried the ramp up in missile testing by Iran and the need to sanction the regime.

“Tehran’s behavior comes as no surprise to the many observers who predicted the deal would not alter its hostility to the West or its defiance of international norms. Unfortunately, the Obama administration’s response has also been much as critics predicted: It has done its best to play down Iran’s violations and avoid any conflict out of fear that the regime might walk away from a centerpiece of President Obama’s legacy,” the Post wrote.

In reference to a push by Iran to lift restrictions on accessing U.S. currency markets, the Post said “Secretary of State John F. Kerry, the accord’s architect, said Tuesday that the regime ‘deserves the benefits of the deal they struck.’ There’s logic to that. But there’s also a problem of reciprocity: Should the United States take steps not strictly mandated by the text of the nuclear accord at a time when Iran is testing nuclear-capable missiles?”

What has all this wrought? Not the peace and moderation promised by Iran lobby supporters such as Trita Parsi of the National Iranian American Council, but instead the world has witnessed a global military spending boost of nearly $1.7 trillion in 2015, the first increase in several years as a result of Iranian regime’s rise and increase in global terrorism and proxy wars fueled by Iran according to a new report.

Tiny Qatar has signed a deal for $7.6 billion to buy 24 Dassault Rafal fighter jets from France. Kuwait on Tuesday finalized a deal to purchase 28 Eurofighter Typhoons, a deal estimated to be worth around $8 billion; all in response to the uncertainty the Iranian regime is sowing.