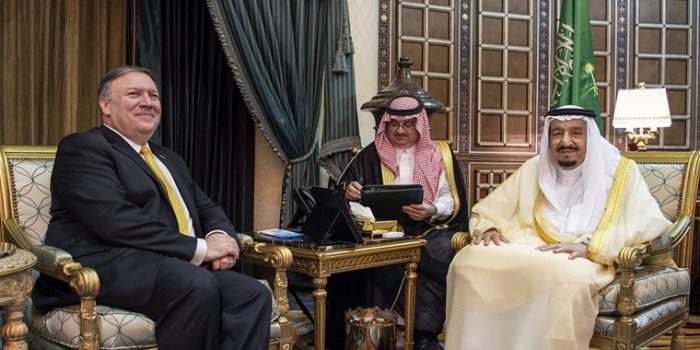 Pompeo meets with Saudi officials on his first trip as the new Secretary of States, April 2018

Fresh off his Senate confirmation despite a desperate effort by the Iran lobby to torpedo it, Secretary of State Mike Pompeo kicked off a whirlwind trip overseas with stops at a NATO summit in Brussels, Saudi Arabia and Israel in which he put the Iranian regime front and center of U.S. foreign policy moving forward.

The turnaround from the Obama administration’s attitude towards the Iranian regime is startling and badly needed. Under the previous administration, the focus of making the Iran nuclear deal the centerpiece of its foreign policy achievements drove out all other considerations.

Iranian regime’s long and brutal history of human rights violations was largely ignored as an inconvenient truth. Iran’s status as a state sponsor of terrorism was overlooked and its threats to its neighbors were glossed over by measly promises of “moderation” that never came to pass.

If hindsight is 20/20, then in the three years since the deal was struck, the world has seen Iran’s true colors and it’s largely consisted of red for the blood spilled and black for the charred remains of cities and villages blasted into oblivion in Syria, Iraq, and Yemen.

To say the world became a much more dangerous place with the rise of Islamic extremism coupled with the outflow of Iranian money supporting terrorist groups is a gross understatement.

And yet, the Obama administration held on to the hope that things would get better, if nothing else because it couldn’t stand to admit that it made a colossal mistake in the approving of the nuclear deal without any conditions on inspection of Iranian regime military sites, its ballistic missile program or meddling in the affairs of its neighbors.

The Trump administration hasn’t been under illusions about Iran’s role in destabilizing activities and has correctly called the mullahs out for their role as the center of troubles in the Middle East. Even more fortunate, this administration frankly doesn’t care much about its perceived public image or the goodwill of academics, television analysts or armchair foreign policy wonks.

Under Pompeo and new national security advisor John Bolton, this administration has been blunt and to the point; a shock to the system of typically mild-mannered diplomacy practiced over the past decade.

Pompeo kicked off his first full day as secretary of state this past Friday at a NATO summit for foreign ministers in Brussels in which he said it was “unlikely” the president would remain in the Iran nuclear deal after the May 12th deadline unless European leaders agreed to a “substantial fix” addressing the president’s concerns.

“Absent a substantial fix, absent overcoming the flaws of the deal, he [Trump] is unlikely to stay in that deal,” Pompeo said.

While President Trump has met with French President Emmanuel Macron and German Chancellor Angela Merkel in two visits in which both pressed him to remain in the deal, the president has made it clear what his conditions are to stay in the agreement. The diplomatic ball is now firmly in the hands of European and Iranian negotiators.

But beyond the nuclear agreement, Pompeo continued on to Iranian rival Saudi Arabia to make clear the U.S. position that now views Iranian regime as the greatest threat to regional stability.

Speaking to reporters in Saudi Arabia, Pompeo said the multi-party agreement reached in 2015 to curb Tehran’s nuclear program did not do enough to contain the Islamic Republic. “In fact, Iran has only behaved worse since the deal was approved,” he said.

Secretary Pompeo, cited Iranian regime’s support for the “murderous” government of Syrian President Bashar Assad and also accused the country of arming Houthi rebels in Yemen who have repeatedly targeted Saudi cities with ballistic missiles — a charge denied by Tehran.

“Iran destabilizes this entire region,” Pompeo said, standing alongside his Saudi counterpart in Riyadh. “It is indeed the greatest sponsor of terrorism in the world, and we are determined to make sure it never possesses a nuclear weapon.”

That thematic was carried to Israel as Pompeo repeated his talking points while meeting with Israeli officials.

The trip highlighted the forming of a new alliance in the Middle East opposed to Iran’s expansion making strange bedfellows of traditional foes in Saudi Arabia and Israel, along with the Gulf states, many of which have been on the receiving end of Iranian machinations to stir up unrest with protestors and terrorist acts.

The bluntness of the Trump administration has turned the tables on the mullahs who now are the ones on the proverbial hot seat and have to make the decision on whether or not to stay in the deal by acquiescing to the U.S. demands.

While the Iran lobby, especially the National Iranian American Council, has worked mightily in an effort to portrays the president’s tough talk as a pathway to war with Iran, the reality has been a clear definition of the expectations for Iranian compliance moving forward and failure of the deal rests squarely with the mullahs in Tehran and nowhere else.

There is no small irony that the discussions taking place now are not about what concessions the U.S. must give to Iran to preserve the nuclear deal, but rather what will the Iranian regime do to stay in a deal that it needs more than the U.S.

The inescapable fact right now confronting the mullahs and Hassan Rouhani is that Iran is a basket case of a nation with a free-falling currency, stagnant economy, dwindling foreign cash reserves and beset with civil unrest and protests on an almost daily basis.

The regime needs the deal badly in order to hang on to any kind of ability to convince the world that it’s indeed a reformed nation, a fiction that has served it well the past few years but has become an outright lie.

Just as North Korea has promised to decommission its nuclear test site and reactor, the president’s tough approach may soon yield the same dividends with Iran.