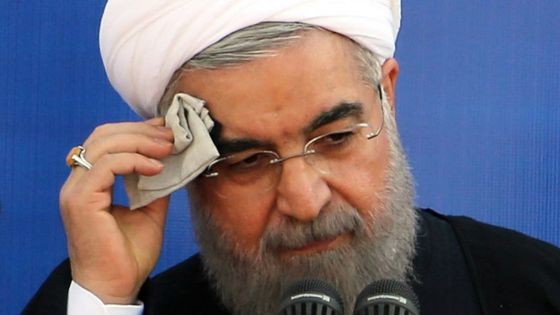 Myth of Hardliners vs. Moderates in the Iran Regime

One of the cornerstones of the arguments made by the Iran lobby in favor of the nuclear agreement with the Iran regime was that its passage would empower “moderate” coalitions within Iran to push against “hardliners” in opening up the regime to the outside world.

It was a nice fairy tale, but like most children’s stories, it’s not based in facts or the real world. Regime advocates such as Trita Parsi and Reza Marashi of the National Iranian American Council and Joseph Cirincione of the Ploughshares Fund yelled from the rooftops that the nuclear deal would serve as the bridge towards a more open and inclusive relationship between the regime and the rest of the world.

But the reality has been very different and well documented as the mullahs in Tehran doubled down on a policy of aggressive militarism in Syria and Yemen, while also launching a new brutal crackdown at home with scores of new arrests and executions that have been widely condemned by human rights and dissident groups.

But for Iran, the mythology of the “moderate” factions within a fractured government is just too good to let go, so the regime continues to push the story of a “battle” within the regime as personified by Hassan Rouhani leading the charge for moderation and inclusiveness vs. Ali Khamenei and the hardline elements in the military and judiciary.

Many Western news media are lulled into the same storyline by giving it plenty of play such events over the weekend in which Rouhani gave a broadcast speech in which he criticized “hardline media” hinting that some outlets are connected to security forces responsible for a wave of recent arrests in the country aimed at crippling Western influence, according to the New York Times.

The Times dutifully reported that Rouhani had spoken out against the wave of arrests and leveled a veiled criticism at the regime’s 12-member Guardian Council at the potential exclusion of candidates in the upcoming elections.

First of all, the mere fact that Rouhani could be criticizing the Guardian Council for restricting candidates is particularly ironic since it was the Council that cleared the pathway for Rouhani to become president by eliminating hundreds of potential candidates.

Also, the reporting of this so-called rift reveals the knowledge and cultural gap Western news media have about the workings of the regime government. The authority vested in Khamenei is near absolute, as is his control over the military, judiciary and economy. Rouhani’s portfolio by comparison is Spartan at best and serves largely to fulfill the policies and goals of the religious cadre of mullahs that run Iran.

Khamenei, and by extension the mullahs, were interested in a nuclear deal solely to relieve the regime of crippling economic sanctions that were threatening their grip on power by inciting an increasingly restive Iranian people to protests against the impoverished lives they were living.

The object for Khamenei was to secure release of billions of dollars in frozen assets and be given a free pass by the West to pursue his goals without fear of retaliation of threatened new sanctions. To that end, Khamenei achieved his goals which is why he has embarked on his latest plans to secure his domestic base by cracking down on dissidents and the media; even going so far as to arrest another American, Siamak Namazi who is closely tied to Rouhani, and launch a deadly attack on Camp Liberty in Iraq which houses members of the Iranian resistance.

Given the regime’s past history of dealing with internal dissent, including the ouster of officials who speak out against Khamenei or imprisonment of dissenters, one wonders why Rouhani would risk censure or even expulsion by Khamenei for his perceived bold statements supporting a free press and opposing Khamenei.

Simply put: Because it’s just a show. Rouhani always has been and remains a loyal foot solider for the regime and was hand selected by Khamenei for his post. His value to Khamenei comes from being perceived by the West as a “moderate” face. This allows Khamenei the luxury of running the oldest scam anyone watching a police procedural like “Law and Order” would recognize.

Rouhani is the good cop to Khamenei’s bad cop.

Together they have manipulated the West into believing the idea of a schism within Iran to the extent the West needs to do more to help empower Rouhani against the “hardliners.” In essence, the nuclear negotiations are not over for Iran; they never stopped. For Khamenei and Rouhani, the nuclear agreement is still being negotiated and the West needs to deliver in order to gain the regime’s continued “compliance.”

This was evident in the inspection of the Parchin military site by the International Atomic Energy Agency after it had been scrubbed and sanitized. It was also shown by the invitation from the U.S. to include Iran in international talks on Syria even after Iran mullahs mounted a large-scale offensive there alongside Russia.

Sadly Western governments seem to be playing the game the mullah Rouhani and Khamenei want them to, pretending that there are “moderates” within a regime that has plus 2000 executions on his record just during the recent two years.