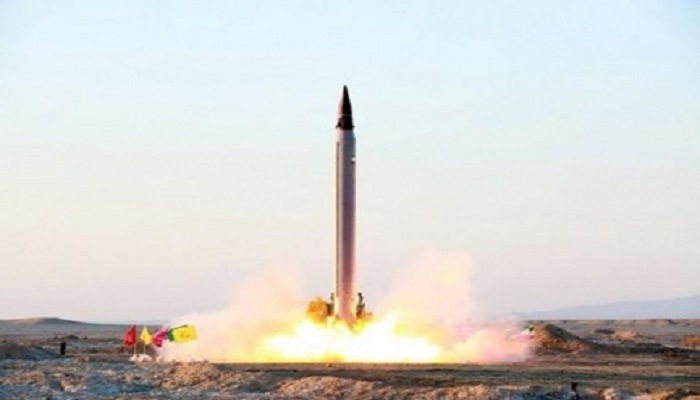 As 2015 rolled into 2016, the world celebrated with fireworks, parties, countdowns and even offered prayers for a peaceful new year, but the Iran regime dashed those hopes and threw cold water on the festivities by once again flexing its ideological muscle in regards to its illegal ballistic missile program.

Regime president Hassan Rouhani kicked off the New Year by delivering an order to his defense minister to expedite development of the regime’s ballistic missile program in response to threatened new U.S. sanctions set to be imposed on Iranian defense companies.

Rouhani made his comments on his official Twitter account throwing into confusion the nuclear agreement completed last July. It was a confusing situation being created since the Obama administration had been moving aggressively to begin dismantling economic sanctions under the agreement as early as this month, while at the same time it was set to impose new sanctions for the illegal test firing of two new ballistic missiles in violation of United Nations Security Council sanctions.

The schizophrenic nature of the situation illustrates perfectly the almost comical nature of the nuclear agreement where on the one hand the Obama administration is almost tripping over itself to grants relief to the Iran regime, while at the same time rattling its sword over illegal missile development; development it allowed to happen in the first place by removing them as a condition of the same nuclear agreement.

It also brings into sharp focus the essential nature of the Iranian regime which is to push the proverbial envelope as far as it can in taking advantage of its adversaries’ disarray.

“If U.S. continues its illegitimate interference with Iran’s right to defend itself, a new program will be devised to enhance missile capabilities,” Rouhani said in his tweet. “We have never negotiated regarding our defense capabilities including our missile program and will not accept any restrictions in this regard.”

“Given the current circumstances in the region and the world, we believe peace and security can only be achieved through strength,” he said. “Therefore, we are going to expand our missiles in terms of range and accuracy.”

But in a contest of who might blink first, the Obama administration opted to delay implementation of the proposed sanctions amid threats by the mullahs in Tehran that any fresh U.S. sanctions might force the regime to pull out of the deal; a deal promising to deliver over $100 billion in badly needed cash to the regime.

While Obama officials offered no definitive timeline as to when these sanctions might be imposed, the announcement to impose them was originally scheduled for last Wednesday. By Thursday, members of Congress criticized the administration’s decision to pull back as another capitulation and appeasement to the mullahs.

“I believe in the power of vigorous enforcement that pushes back on Iran’s bad behavior,” Democratic Sen. Chris Coons of Delaware, a supporter of the nuclear deal, said Friday. “If we don’t do that, we invite Iran to cheat.”

Critics of the White House accused President Obama of backing down on his promises to take action in the face of Iranian provocations such as missile launches. They drew parallels to Mr. Obama’s failure to follow through on threats to launch military strikes on Syrian President Bashar al-Assad’s regime in 2013 in response to its use of chemical weapons against civilians.

“I fear that pressure from our ‘partners’—or threats from the Iranian government that it will walk away from the deal or threaten the U.S. in other ways—have caused the administration to rethink imposing sanctions for Iran’s violations of the testing ban,” said Sen. Bob Corker (R., Tenn.), chairman of the Senate Foreign Relations Committee.

The on-again, off-again nature of these new sanctions does little to strike fear in the hearts of the mullahs and if anything, emboldens them into believing nothing they do will earn a rebuke from Washington.

The United States has also accused Iran’s Revolutionary Guards of recklessly and provocatively firing rockets this week in the vicinity of American warships in the heavily trafficked Strait of Hormuz, a vital international waterway bordering southern Iran that connects with the Persian Gulf, in another sign of belligerent activity from the mullahs.

The confrontation over ballistic missiles and increased level of animosity between the regime and the U.S. in the wake of the nuclear deal points out the incredible pile of falsehoods pushed by the Iran lobby – most notably the National Iranian American Council – which promised a new era of moderation and cooperation and instead has seen fresh terror attacks in Paris and San Bernardino inspired by Islamic extremism, launches of new ballistic missiles and the near state of war between the Iran regime and Saudi Arabia.

Hardly a recipe for peace and stability in 2016 regime supporters such Trita Parsi of NIAC and Jim Lobe at Lobelog promised.