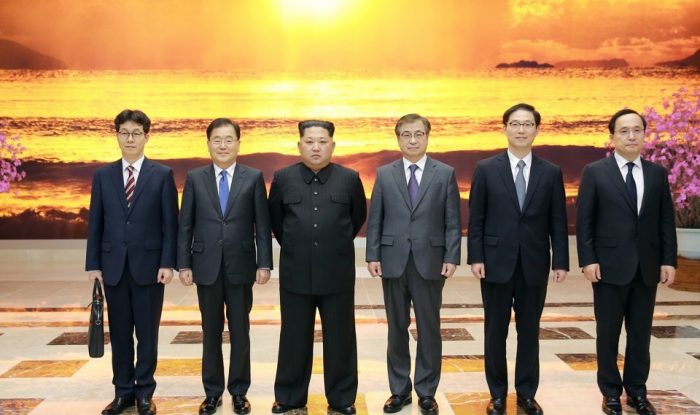 The much-criticized and ridiculed Iran nuclear deal is on life support and the Iran lobby’s top cheerleader, the National Iranian American Council, is doing cartwheels and midair splits in a desperate bid to save it.

The NIAC has steadily been churning out editorials ever since the Trump administration moved into the White House and the president began threatening to tear up the agreement.

But since his swearing in, President Trump has continued to renew certification of the agreement and kept it as leverage against European allies who were eager to embrace newly opened markets in Iran but gave scant attention to the Iranian regime’s destabilizing efforts throughout the Middle East over the past two years.

The president figured out quickly that summarily ditching the agreement wouldn’t buy the U.S. and its allies anything since the mullahs in Tehran got what they most desperately needed from the Obama administration anyway: cold hard cash, billions of it in sanctions relief.

Now we are seeing some of the fruit coming from his decision to bash the nuclear deal, while at the same time keeping it in play. France has led increasing calls to modify the agreement to address the Trump administration’s chief concerns including Iran’s ballistic missile program, its sponsorship of terrorism and brutal human rights record.

The French have realized that appeasing Iran yielded little of anything in the way of tangible benefits. Syria become a hellhole. Moderating forces in Iran was quickly crushed and Islamic extremist terrorism flourished, even striking France in Paris and Normandy.

Predictably, the NIAC and rest of the Iran lobby has reacted to the potential of modifying the agreement as tantamount to killing it. It’s an odd position to take since it basically assumes Iran will walk away from the deal and immediately restart its nuclear program.

Ryan Costello, the NIAC’s assistant policy director, delivered that very message in an editorial appearing in Defense One, in which he makes the inane argument that ditching the nuclear agreement will allow Iran to turn into another North Korea.

He goes further by comparing the North Korean Agreed Framework and its failure to the potential failure of the Iran deal as a result of U.S. policy decisions not to live up to its end!

“Under the George W. Bush administration, the U.S. shifted from incomplete follow-through to looking for an exit from the agreement. Far from normalization, Bush lumped North Korea into an ‘axis of evil,” Costello writes.

“And former Undersecretary of State for Arms Control John Bolton infamously crowed about evidence of secret North Korean uranium enrichment: ‘This was the hammer I had been looking for to shatter the Agreed Framework.’ Had the Bush administration sought to address the challenge through diplomacy instead of exiting the accord, today North Korea might not be close to fielding nuclear-tipped missiles capable of striking the United States,” he adds.

Costello blames U.S. for policy in saying “just as North Korea felt that they were not getting what they bargained for under the Agreed Framework, faith that the U.S. will uphold its end of the JCPOA has precipitously declined in Iran. The Trump administration is inflicting deliberate harm by violating the accord, and daring Iran to be the one to leave first.”

In this, he is partially correct. The Trump administration surmised that the threat Iran was posing was its expansion of military and terrorist activities through the region. It saw what its Quds Force was capable of inflicting in Syria, Iraq and Yemen. It also understood that the crash program to develop ballistic missiles and place them in Syria and other countries Iran controlled posed an imminent danger to the U.S. and its allies.

Ditching the nuclear deal outright would do little to coerce the Iranian regime back into the fold of negotiations and split the U.S. from the EU, which is why the mere threat of ditching the agreement and laying out the provisions for a follow-on agreement with the Iranian regime has shaped up as the policy prescription on finding support among EU leaders.

President Trump is slowly cobbling together consensus and using the recent mass protests in Iran as a catalyst to convince the rest of the world that Iranian regime remains a theocratic dictatorship no different than North Korea.

In rebuilding that consensus, the administration seeks to reassemble a new sanctions regime that can again bring the Iranian regime back to the bargaining table and force a new agreement.

Of course, the NIAC is screaming bloody murder about the potential scenario, but the proof of its viability is ironically playing out in North Korea where the Trump administration’s harsh and bellicose rhetoric aimed at the Hidden Kingdom, alongside crushing new sanctions have brought North Korea back to the bargaining table.

In a historic announcement by South Korea, North Korea’s leader Kim Jong Un indicated a willingness to reopen diplomatic talks with the U.S. and South Korea about denuclearization and normalizing relations, and “made it clear” that it would not resume provocations while engaged in dialogue, the officials said upon returning to Seoul, according to the Washington Post.

“He does deserve credit,” said Ian Bremmer, the head of the Eurasia Group and a Trump critic who nonetheless sees some hope in his North Korea strategy. “I think North Korea’s openness in the Olympics and summitry with South Korea, as well as potentially direct talks with the U.S., are the result of Trump’s approach.”

Krishnadev Calamur, a senior editor at The Atlantic, writes that “beyond the potential that Kim is feeling confident, there are several other reasons the North could be making such an offer. It could be that Kim is genuinely keen on dialogue with the United States. U.S. and UN sanctions on the North may have hurt the country economically to the point that Kim feels compelled to negotiate—a similar dynamic that helped bring Iran to nuclear negotiations under Obama. The sanctions might also have hurt the regime’s ability to conduct more missile and nuclear tests, something they did regularly in 2017.”

The dynamic is true but hopefully the outcome will be different since its doubtful President Trump will emulate President Obama’s policies of appeasement when it comes to dealing with North Korea and Iran.

In this way, the NIAC is yet again horribly, completely and satisfyingly wrong.