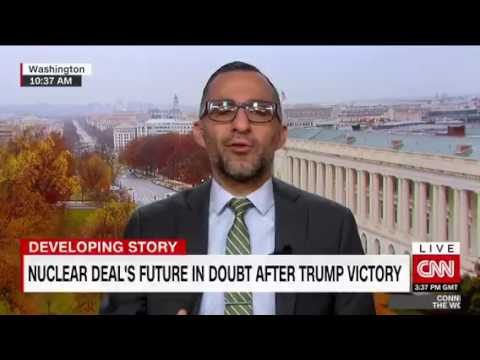 NIAC Gets It Wrong About President Trump and Hassan Rouhani Again

The National Iranian American Council has become one of the most vocal and ardent purveyors of shameless cheerleading for the mullahs in Tehran and has established itself with a solid track record of making statements and promises about future behavior from the Iranian regime only to see virtually all of them proven false over time.

Yet, the NIAC’s continued churning of so-called “fake news” still finds a home in some publications and blogs—albeit a shrinking circle from the heady heydays enjoyed during the Obama administration’s policy of appeasing the regime.

The latest missive comes from Reza Marashi, NIAC’s research director, who has built an uncanny ability to publish “researched” editorials that are consistently wrong, in Al-Monitor in which he makes the claim that recent actions by President Donald Trump against Iran may have helped Hassan Rouhani.

Marashi bases his claim that President Trump’s decision not to recertify Iran in compliance with the nuclear deal, known as the Joint Comprehensive Plan of Action (JCPOA), and sending the matter for Congressional review, has helped fortify Rouhani’s troubled administration because it has rallied Iranian stakeholders against the U.S.

Let’s be very clear on a very important point Marashi ignores: There are no factions within the Iranian regime’s government that are even remotely favorably disposed towards the U.S.

This is an Islamic theological state run by clerics that mandate weekly “Death to America” observances, openly and actively fund terrorist groups that target and kill American service personnel in Iraq and Afghanistan, have taken American citizens hostage and held them for ransom, and have built a ballistic missile capability designed to deliver nuclear payloads as far away as Europe and Asia.

Marashi also claims that Rouhani and top mullah Ali Khamenei are united in a strategic vision to maintain a unified policy towards the U.S. regardless of whatever the outcome of nuclear deal negotiations.

On this point, he is partially correct since Rouhani is the handpicked front man for Khamenei to offer the West a kinder, gentler face of the regime that also tweets in order to build a perception that Iran was a moderate state when in fact it was plotting to massively expand its military operations in Syria, Iraq and Yemen.

“Whatever their differences, Khamenei needs Rouhani and his technocrats to repair the damage wrought by former President Mahmoud Ahmadinejad, and Rouhani needs Khamenei to provide political protection while he does so,” Marashi writes.

It’s a silly statement to make, especially for someone who purports to be a “research director” since it doesn’t take much research to know that the damage Khamenei needed for Rouhani to repair was an Iranian economy crippled by sanctions aimed at its secret nuclear program and the enormous drain on its treasury by bankrolling the Assad regime’s desperate war to hold onto power in Syria.

Marashi makes it sound that Rouhani is merely trying to rebuild an economy hurt by the mismanagement of the Ahmadinejad administration, when in fact Khamenei was desperate to gain an injection of billions of dollars in fresh capital to stave off a total collapse of the economy and consequently the Islamic state.

“Since entering office four years ago, Rouhani has maintained arguably the most diverse and inclusive political coalition in the 38-year history of the Islamic Republic,” Marashi adds.

This is one of the more astounding claims he makes since the Iranian regime allows no dissident political activities, and openly and aggressively rounds up dissenting voices and tosses them into prison, as noted by the harsh crackdown of journalists, artists, students and others by the Rouhani administration prior to parliamentary elections.

The contention Marashi makes that Rouhani was somehow in jeopardy has never been real in fact since Rouhani serves only at the pleasure of Khamenei and it is up to the supreme leader to decide when his usefulness is at an end. For as long as Khamenei perceives Rouhani can maintain the fiction of a more moderate Iran then Rouhani and his allies in the Iran lobby will continue to push their false messages.

The strategy Rouhani employs that Marashi defends in outlining support for the JCPOA had little to do with nuclear power and more with lifting economic sanctions to save the regime with a fresh infusion of capital.

The fact that the Obama administration were eager to do a deal with little consequences attached to its support for terrorism, abysmal human rights and the build out of ballistic missiles only served to reinforce the perception among the mullahs that Rouhani was useful in keeping up the perception that Iran was genuinely interested in becoming a “moderate” player when in fact it was only seeking massive piles of cash.

Marashi does not credit the Obama administration’s unsavory willingness to kowtow to the regime and even arrange for a midnight flight of pallets stuffed with cash sent to Tehran on the eve of the agreement as evidence not of Rouhani’s acumen, but rather American miscalculation that has been borne out over the last two years.

What Rouhani “sold” to Khamenei was a vision that Iran could have its cake and eat it too by negotiating a nuclear agreement that never eliminated its nuclear development—only delayed it—and freed it to move aggressively forward with its missile program to someday threaten its neighbors with ballistic missiles armed with nuclear warheads,

The only kernel of truth Marashi does offer is the idea that Iranians would not blame Rouhani for the nuclear agreement’s failure. The Iranian people would certainly not blame him since they live under a repressive government that punishes contrary thinking with stiff prison sentences and quick trips to the gallows mandated by clerical courts.

Marashi also failed to note how under Rouhani, Iran’s pace of public executions set a record-breaking pace pushing it far beyond almost every nation on Earth. It’s no wonder no Iranian would openly blame Rouhani since to do so almost guarantees a prison sentence.