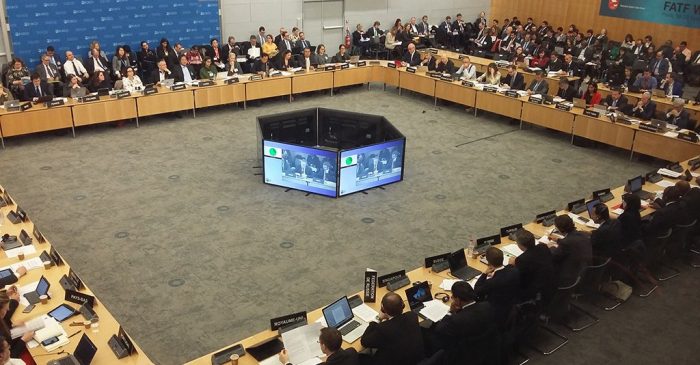 The Financial Action Task Force (FATF) is an inter-governmental body made up of 35 countries and two regional governing groups setting standards to promote effective implementation of legal, regulatory and operational measures combating money laundering, terrorist financing and other related threats to the integrity of the international financial system.

The FATF monitors the progress of its members in implementing necessary measures, reviews money laundering and terrorist financing techniques and counter-measures and promotes the adoption and implementation of appropriate measures globally.

The FATF serves as a crucial watchdog then against the spread of global terrorism through the transfer of funds through the international banking system. Chief among its current assignments is to monitor North Korea and the Iranian regime.

As part of its monitoring of Iranian regime, the FATF provides periodic updates on the action plan the regime pledged to follow as part of the nuclear deal it signed two years ago. In its most recent update, the FATF noted that Iran’s action plan has expired with most items on its to-do list remaining incomplete.

Chief among the items still needing to be addressed by the regime are:

If Iranian regime does not meet these obligations, the FATF has the power to impose counter-measures punishing the regime, including restricting its access to international currency exchanges and electronic transfers.

It was this kind of pressure that proved pivotal in bringing the mullahs to the bargaining table in the first place.

Although Iran has left most of the required action items unfilled, the FATF has opted to hold off pending the Iranian parliament taking up these measures in draft legislation. Their outcome remains uncertain as the regime has dropped suggestions it may walk away from the nuclear deal anyway, including statements made by Iranian Deputy Foreign Minister Abbas Araqchi.

And yet, while the FATF continues to press the regime to comply with its promises, the National Iranian American Council didn’t miss the opportunity to crow that the FATF’s forbearance was in fact some kind of endorsement of the Iranian regime’s actions.

Predictably, the NIAC also called the FATF’s actions as standing up to pressure from the Trump administration.

“By showing itself unwilling to give in to pressure from the Trump administration and outside advocacy groups like United Against Nuclear Iran, which were pushing for the re-imposition of counter-measures against Iran, FATF smartly avoided politicization of its work and protected its integrity as a technical body assessing countries’ anti-money laundering and terrorist financing laws,” the NIAC statement read.

The NIAC said the Iranian regime had made “significant progress” in meeting the action plan, but neglected to note the disparity in how far the regime still has to go. For the NIAC, its only concern is to keep pushing the goal line back farther and farther to avoid crossing it and triggering new sanctions.

Its failure to recognize the agonizingly slow pace of approval of legislation by the Iranian parliament as part of a larger scheme to not make any changes in its financing of terror demonstrates the charade of the NIAC’s positions.

While the Trump administration has succeeded in focusing new pressure on Iran, Iran lobby groups such as the NIAC are now struggling to find any excuse to hold back the rising tide against its patrons in Tehran.