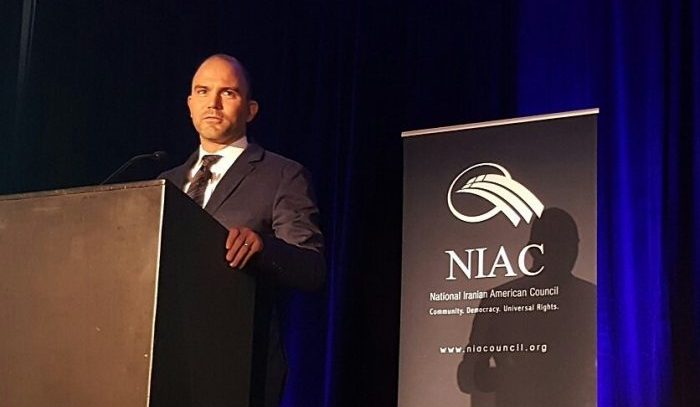 How much does it cost to meet your lawmakers in a venue where you can exert the influence of the mullahs in Tehran? Apparently only $349 and that also gets you three lunches and two breakfasts!

But if you’re strapped for cash, maybe because you have to pitch in for your family to hire a lawyer in an effort to reach your dual-nationality relative who is sitting in Evin prison in Iran, for only $175 you can still get access to lawmakers, but you miss out on a “Gala Reception” and hors d’oeuvres.

So less pizazz, but still you can buy access and who is selling this access at such bargain rate prices? The National Iranian American Council which held its “Leadership Conference” this weekend in Washington, DC.

The conference was a veritable who’s who of Iranian regime activists and lobbyists, all previously dedicated foot soldiers in the fight for securing a nuclear deal with Iran, as well as the fight to buy reprieves for the regime from ongoing sanctions for violations of human rights and sponsorship of terrorism.

Some of the more notable speakers included Joseph Cirincione of the Ploughshares Fund,which received and distributed cash to various members of the Iran lobby including NIAC according to investigative media reports, Ben Rhodes, deputy national security advisor to President Obama and architect of the now-infamous “echo chamber” of supporters used to deceive media and the American people as to the inherent flaws of the nuclear agreement.

Other key participants curiously included Christopher Backemeyer, deputy coordinator of sanctions policy in the State Department, and Michael Mosier, associate director at the Office of Sanctions Policy & Implementation in the Office of Foreign Assets Control. These two men hold considerable power over the question of whether or not Iran is complying with the nuclear agreement and whether or not certain sanctions should be enforced such as bans against the regime accessing US currency exchanges.

The fact that such key regulatory officials are participating in a conference sponsored by an organization identified as having strong links to high ranking Iranian officials should prove troubling. It is similar to having members of the Treasury Department’s securities enforcement division having drinks with executives from Enron or Lehman Brothers prior to the mortgage meltdown.

What is always fascinating about the NIAC’s annual confab is the packing of the speakers list with its own staffers, in this case Trita Parsi, Reza Marashi and Tyler Cullis, each of whom have worked diligently to carry Iran’s water and make excuses for the worst excesses of the regime. Watching these three “stooges” try to divert attention away from ballistic missile launches, mass arrests of journalists, public hangings of Iranians or arrests of Americans, Brits and other citizens is like watching a bad sketch comedy troupe.

Considering that one of the self-proclaimed mandates of the NIAC is “to ensure that human rights are upheld in Iran and that civil rights are protected in the US. NIAC believes that the principles of universal rights – Freedom of assembly, religion, and speech, as well as dignity, due process and freedom from violence – are the cornerstones of a civil society” one might ask why NIAC never invites any of the Iranian-Americans who can tell their story first hand of what Iranian justice is like.

Why is it that NIAC never has people such as Saeed Abedini, the Christian pastor held and tortured in Iran, or Amir Hekmati, the former US Marine brutalized in prison, or Jason Rezaian, the Washington Post reporter, to attend a conference and tell their story in furthering an understanding of the terrible forces at work within Iran’s religious leadership?

Of course the NIAC would never showcase any of these Americans since their presence would be a terrible embarrassment and highlight the true nature of the Iranian regime which is cruelty, punishment, abuse and control. Even though these Americans were released in exchange for $1.7 billion in cash, more Americans have been taken this year and the NIAC holds no fundraiser for them; launches no grassroots campaign for their release and holds no protest in their honor.

Even after the regime’s president, Hassan Rouhani, appeared on NBC prior to his speech before the United Nations General Assembly, he confidently admitted to Chuck Todd that Iran did not recognize dual nationalities.

And yet the NIAC issued no condemnation, no rebuke, not even a single tweet objecting to the extralegal procedures against Iranian-Americans, which the NIAC was ostensibly working on behalf of.

The height of absurdity was reached and exceeded by several speakers at this weekend’s proceedings, including this juicy quote from Rhodes.

“Acceleration of tensions between Gulf partners and Iran is a serious problem across the region,” said Rhodes as quoted by NIAC.

You think? It might be one of the better understatements, ranking up there with “peace in our time” by Neville Chamberlain.

The Iranian regime has pushed the possibility of all-out conflict with regional rival Saudi Arabia, while at the time supporting three proxy wars in Syria, Iraq and Yemen that have claimed the lives of almost 750,000 people. NIAC’s promises that Iran would be a partner for peace and moderation following the nuclear deal have turned out to be false and alarmingly so.

What was promising was the position taken by Philip Gordon, a senior foreign policy advisor to Hillary Clinton and senior fellow at the Council of Foreign Relations, who reiterated the presidential candidates public statements of skepticism about Iran’s conduct and the need to “distrust and verify” when it comes to enforcing the nuclear deal, much to the chagrin of Parsi who tried everything short of begging to get Gordon to make positive statements about the regime.

Gordon’s reticence provides hope that the next president will approach Iran with a clean slate and not be motivated to the falsehoods and “echo chamber” of the NIAC.