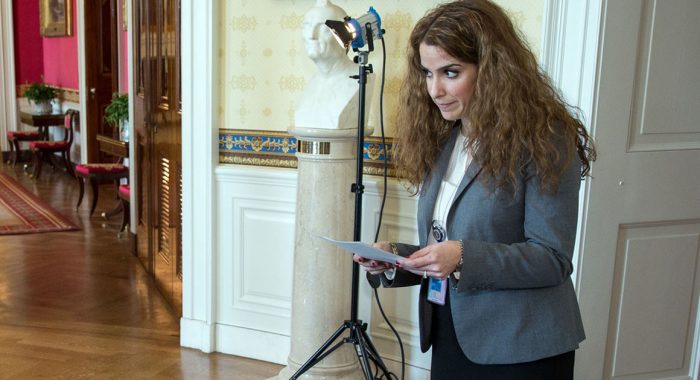 Sahar Nowrouzzadeh, a State Department official who was instrumental in directing policy for completing the much-criticized Iran nuclear deal under the Obama administration, has been reassigned to other duties in the State Department by the Trump administration which has generated a flurry of lobbying activity by the Iran lobby.

The National Iranian American Council organized an effort to denounce the move in a letter sent to White House Chief of Staff John Kelly and acting Secretary of State John Sullivan even though the reassignment was made last April 2017.

The genesis for this new round of false outrage though was a Politico story that discussed email conversations between administration officials calling into question her political loyalty. In essence, the NIAC and its brethren were objecting to that age-old political practice of “cleaning house” when a new party and administration comes to power.

Where was the NIAC’s outrage when the Obama administration led its own purge of Bush-era appointees and installed its own loyalists in key civil service positions at the end of its own term to ensure policies were continued in spite of the new Trump administration’s move in?

To say the NIAC’s outrage is silly is an understatement. Every president reserves the right to pick and choose whomever he likes to serve and carry out his policies. Every president is also entitled to move or reassign any federal employee that does not wish to carry out that administration’s policies.

But in the twisted logic of the NIAC, it seems even that most basic of presidential prerogatives is off-limits when it comes to keeping a trusted ally in the heart of policy-making when it concerns the Iranian regime.

In the case of Nowrouzzadeh, her involvement in policy towards Iran under the Obama administration has been well-documented.

Born in the U.S. to Iranian parents, Nowrouzzadeh has worked in various government capacities including the Defense Department in 2005 as a foreign affairs analyst and later the State Department in a similar capacity. She later joined the Obama White House in the National Security Council as a director for Iran and part of the team responsible for the Iran nuclear deal.

What raises the suspicions of many though was her prior stint working for NIAC which seems to have been purged from her bios and NIAC’s public records. Why? Obviously, association with the Iran lobby group can be fatal to a career civil servant’s future job prospects and it has been in Nowrouzzadeh’s case.

Also, her key involvement in crafting an agreement that President Trump has openly derided also has proven disadvantageous.

While the reassignment is common in new administrations, the furor is not as the NIAC has chosen to use her as a stalking horse for attacking the Trump administration yet again as ardent Iran-haters and racists.

It is sad to see the NIAC elevate her case and drag her through the public mud in order to score political points over an action that every incoming president undertakes throughout history.

What this does reveal though is NIAC’s willingness to cast any stone in wild attempts to attack the Trump administration in some blind hope of slowing down the freight train of change barreling towards the Iranian regime.

The setbacks for NIAC are numerous and significant:

Oddly enough, Nowrouzzadeh could have settled this entire unhappy episode herself by simply advising President Trump’s incoming foreign policy team on the best methods for improving the nuclear agreement she had just worked to implement.

If you want to show your non-partisan, unbiased credentials, then all one has to do is provide the other point of view.

In her case, and because of the effort by NIAC to leverage her reassignment, the sad truth is that policy making in the State Department became highly politicized under the Obama administration, especially towards Iran.

Her reassignment is only the tip of the iceberg since if President Trump is going to finally hold the Iranian regime accountable for its support of terrorism and unbridled human rights failures, he will most likely need to reassign many more Nowrouzzadehs and that is the future that NIAC is terrified of.