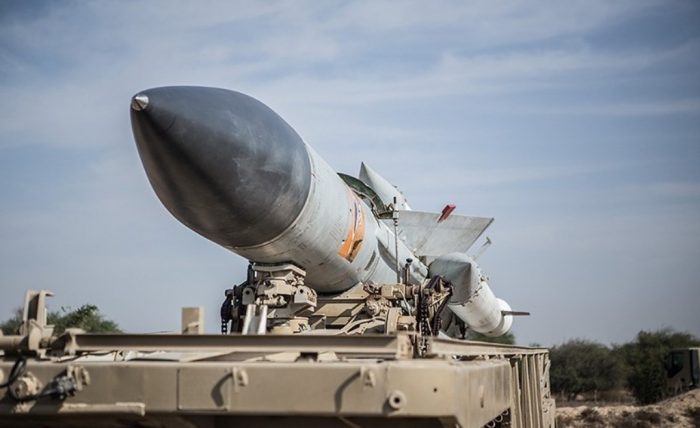 Just when you thought there might be the tiniest of cracks in the unified armor of the National Iranian American Council’s mind-numbingly strict defense of the Iranian regime with its recent statement criticizing the death of Canadian-Iranian environmentalist Kavous Seyed Emami, the NIAC went full-bore again in defending the regime’s ballistic missile program with an “analysis” of it.

Prepared by the NIAC’s Ryan Costello, the paper makes the argument that Iran’s ballistic missile program should not be a concern to the U.S. or anyone else (except maybe Saudi Arabia and Israel) and in fact ought to be viewed as benign.

He makes these arguments because the regime’s missile program has proven problematic for supporters of the Iran nuclear agreement. It is the inconvenient truth that no matter how much Iran lobby supporters say the deal is good for the world, the regime’s display of aggressive missile firepower boldly mirrors that of North Korea and frankly, scares the daylights out of the rest of the world.

It also doesn’t help that the Iranian regime fomented wars in Syria, Iraq and Yemen and is busy brutalizing its own people, as well as snatching citizens from other countries such as the U.S., U.K. and Canada.

That tends to make people have less faith in your word.

Which is why our good friend Ryan Costello is busy trying to reassure everyone that missiles with the throw weight necessary to carry a large warhead with a present range of over 2,000 kilometers is nothing to worry about.

“Despite this flurry of activity, there have been subtle shifts in Iran’s missile program that could reduce the program’s threat. In particular, Iran’s articulation of a range limit to its missiles and a shift toward short-range solid fueled missiles signals an interest in conventional, regional deterrence, not long-range nuclear missiles,” Costello writes.

Costello bases his argument that solid-rocket motor propelled missiles are somehow shorter range and less of a threat than liquid-fueled ones.

He obviously doesn’t know anything about missile technologies.

The reason why Iran and North Korea for that matter are aggressively pursuing solid-fuel boosters is because of the cut down in response time. If you are looking to blast your neighbors to smithereens, it helps to be able to do so without warning.

Costello also bases his claims on statements made by top mullah Ali Khamenei that Iran would halt its development of longer range missiles and stick to the 2,000 km limit. It’s a dubious claim to stake global peace and security on given that Khamenei’s past track record of reliability has been just short of Adolf Hitler’s in 1938.

Costello credits all this to the Iran nuclear deal in shifting away from longer-range missiles, an absurd contention since he offers no proof other than to say the regime hasn’t fired as many test missiles as North Korea.

That is not a reassuring statistic.

The mere presence of a growing ballistic missile fleet, especially one being converted to solid-fuel boosters, represents an enormous destabilizing influence in the Middle East. Let’s remember that Costello and his brethren at the NIAC all claimed that passage of the nuclear deal would promote moderation within Iran and help stabilize the region.

The past three years have flatly proven them wrong as Iran has been at the very center of chaos in the region.

Costello also fails to address the elephant in the room, which is how can you trust a regime to not develop longer-range missiles when there is no agreement in place to prevent that from happening in the first place!

The argument the Iran lobby made for the Iran nuclear deal in the first place was that it was necessary to have an agreement and structure in place to hold Iran accountable and provide leverage through an inspections regime, but no such structure exists to blunt Iranian development of these weapons.

In essence, Costello is making the argument that we simply shouldn’t worry about them because hey, the mullahs will only fire them in self-defense!

This also explains why Costello’s boss, NIAC head Trita Parsi, has been busy trying to drum up the fear of war again by blaming Israel for exacerbating tensions with Iran, including the recent shootdown of an Iranian drone in Syria.

“Instead of a showdown in Syria, the showdown will move to New York and feed into an ongoing effort by Saudi Arabia and the Trump administration to use any pretext – missiles, drones or violating the ‘spirit’ of the Iran deal – to pass a Chapter VII UN [Security Council] resolution,” said Parsi, who supports the 2015 nuclear deal.

Parsi goes on to expand that idea in an editorial he authored in Defense One claiming that Saudi Arabia is manipulating the United Nations to punish its long-time regional foe.

“Such a resolution would once again put Iran in the penalty box, with its economy sanctioned and its political pathways for influence in the region blocked — i.e., an all-out containment of Iran. In Riyadh’s calculation, this will thwart Tehran’s rise and shift the regional balance in favor of Saudi Arabia and Israel,” Parsi writes.

It is mind-boggling how the NIAC will try any argument, no matter how far-fetched, to shift blame away from the mullahs and cast it on anyone else.